Home » Previewing BC Women’s Hockey: What to Expect in the Frozen Four 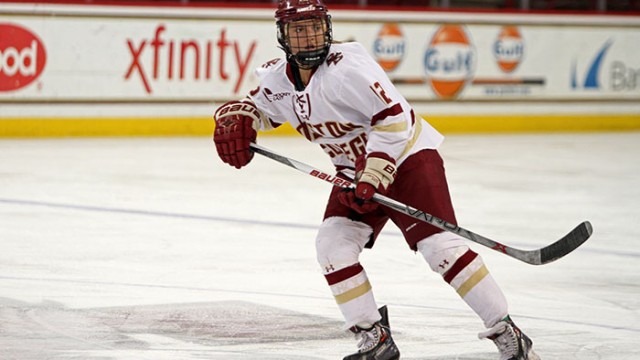 Previewing BC Women’s Hockey: What to Expect in the Frozen Four

For the many Irish Catholics of the city of Boston, March 18 is a day of celebration. It is day two of St. Patrick’s Day Weekend, the most important weekend of the year for any true sons and daughters of The Emerald Isle. For Boston College women’s hockey and its loving fans, however, there is an event that trumps even this most sacred of occasions. The undefeated Eagles (39-0-0) enter the Frozen Four for the sixth time in program history. The last time a team came into the tournament without a loss or tie was in the 2012-13 campaign, when Minnesota went on to claim the title with a final record of 41-0-0. Coming in as the No. 1 seed, the Eagles will face No. 5 Clarkson (30-4-5) in the semifinal of the national tournament, to be played at the Whittemore Center in Durham, N.H..

The Eagles will carry the success of a fantastic season and a strong showing over the past three years into the competition. The class of 2016 is the third-straight senior class to advance to the NCAA tournament. One such player with more tournament experience than any woman in program history is Alex Carpenter, playing in her fourth Frozen Four. According to forward Haley Skarupa, the fact that the Eagles have been there before will help them greatly.

“Our senior class has been through a lot the past four years and I think we really learned and built from those experiences,” Skarupa said at Tuesday’s press conference.

This senior experience will be necessary to help the Eagles vault past the only unseeded team in this year’s Frozen Four, Clarkson. The Golden Knights are riding the wave of success after their 1-0 upset victory against No.4 Quinnipiac in the quarterfinal. BC enters the game after handling rival Northeastern 5-1 in last Saturday’s quarterfinal matchup at Kelley Rink.

On the hunt for its first NCAA title in program history, BC has a lot on its mind. A tournament victory would hail in the first women’s team NCAA championship in the school’s history, and increase the tally of hockey national championships BC has won to six (the previous five were won by the men).

Matchup History: While the two teams have not come face-to-face in the in 2015-16 campaign, the programs are familiar with each other. Although they hold a 6-4-3 all-time record against Clarkson, the Eagles will have their hands full. The Eagles and Golden Knights have squared off once each of the past five years, with Friday’s contest marking the teams’ third-straight meeting in the NCAA tournament. The sides have split the past two games, with Clarkson beating BC 3-1 in 2014. The Golden Knights went on to win the national title that year. In last year’s tournament, BC handled Clarkson 5-1. Friday’s matchup will be the first time the teams have met in the semifinals.

The frequent meeting of the two teams means many current Eagles have left their mark on the Golden Knights. Skarupa leads BC in scoring (1-5-6), recording a four-point performance (1-3-4) in last year’s NCAA quarterfinal. Carpenter follows in close suit, picking up four points (2-2-4) in two meetings. Katie Burt is 1-0-0 against Clarkson, with a 1.00 goals against average and a .952 save percentage.

BC has an impressive .621 win percentage on faceoffs, compared to a .532 win percentage for Clarkson. The Eagles need to exploit this upper hand and give themselves more control of the puck and the game. This will be especially crucial at the Whittemore Center, which is a larger ice surface than the two teams are used to. By controlling the faceoffs, BC will control the puck in its offensive zone, something head coach Katie Crowley emphasized in Tuesday’s press conference.

One aspect the Eagles were able to build upon from last year’s strong season was a stronger sense of knowing when to push forward on defense. Megan Keller has spearheaded this improvement, as the sophomore defender has gained more experience in collegiate play and knows when to attack. The tactical pushes from the defensive end create more shots, which will in turn create more goals. The Eagles must be careful not to overextend, however.

Clarkson’s junior forward is having an impressive season. She’s tallied 49 points thus far (24-25-49), so the Eagles clearly have plenty to worry about. Mercer can efficiently get the puck into the back of the net, whether she sets the play up or finishes it herself. BC will need to keep a close eye on the forward and continue its season-long trend of shutting down opposing offenses.

Minnesota: The best defense is a good offense, the saying goes. No. 3 Minnesota is a team that may prove that. Dani Cameranesi and Hannah Brandt, junior and senior forwards, have tallied 68 and 62 points on the season, respectively. And, let’s not forget Amanda Kessel, who has finally returned from a two-year-long concussion-related injury to become a dominant force. These three women leading a high-scoring offense could be the reason the Golden Gophers have allowed only 1.26 goals per game on average across all competition. The Eagles would need to be on their absolute best to defend against such an explosive opponent.

Plus, Minnesota has a decent insurance policy. If things do fail up front, the goaltending legion is strong and deep. Amanda Leveille boasts a 27-4-1 record with a .941 win percentage. She has allowed just 39 pucks to slip past her this season. Sidney Peters, Leveille’s backup, is 6-0-0, allowing only eight goals. Minnesota has security in the goalie position, which would cause BC to get creative if they are to meet in the final.

Wisconsin: The Badgers are No. 2 in the nation, a position they have earned. The second-best team in women’s hockey is not built mainly on offensive prowess, but staunch defending and rock-solid goaltending. Junior goalie Ann-Renee Desbiens could be playing behind a defense composed of kittens and still keep the game close. She has allowed 26 goals in 37 appearances—less than a goal a game, .7077 to be exact. No matter how fantastic the offense, a stunning keeper such as Desbiens will be hard to beat if the Eagles come face-to-face with the Badgers.

The Badgers are also exceptional at defending while down in numbers. With a 94.7-percent penalty kill team, the prospect of being up a player is not all that exciting for the Eagles.