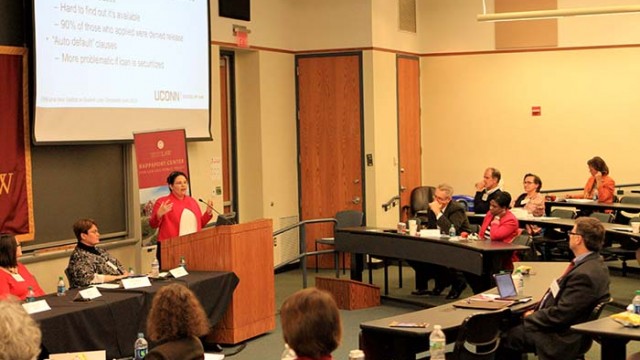 Around 50 businessmen and businesswomen, legal scholars, professors, and educators gathered at Boston College Law School this past Friday for the conference “Student Debt Crisis: Issues and Solutions.” Put on by the Rappaport Center for Law and Public Policy at BC Law, the daylong event featured several panels that discussed the causes and remedies for the student debt crisis.

“The amount of debt that students now are graduating with is staggering,” Elisabeth J. Medvedow, the executive director of the Rappaport Center, said. “Many people are suffering a massive burden because of the system in place. We wanted to bring these experts together to discuss some general solutions.”

Student loan debt has become a driving political and economic issue over the past decade. Since 2004, student loan balances have increased by 74 percent. In 2012 the average student loan debt burden was $29,400 for graduating seniors, according to a study done by the Institute for College Access and Success. With 71 percent of all students graduating with student loan debt, this issue has widespread implications in the education, political, and business sectors.

Before the panel discussions, the conference began in Stuart Hall on Newton Campus with a keynote address given by Deputy Secretary Sarah Bloom Raskin of the U.S. Department of the Treasury. Raskin’s focus in the Treasury Department is on the larger economic impact of student loan borrowing and cyber security. In her address, Raskin discussed the current state of the higher education loan system and whether the system is delivering on its promise to make higher education more affordable and accessible.

“With such a wide variety of experts from different areas, the discussion today provided a lot of innovative solutions to the burden of student debt that college graduates are facing.”

—Elisabeth J. Medvedow, the executive director of the Rappaport Center

After Raskin spoke, the first of three panels, “Did Privatization of the Student Loan Marketing Corporation (Sallie Mae) Work?” began the substantive discussion of the policies of student loans. Moderated by Rohit Chopra, a senior advisor in the U.S. Department of Education, the panelists gave prepared remarks about the privatization of student loans during the financial crisis from the perspective of the fields of law, public policy, and non-profits.

Following that discussion, the second panel, “Reforming Student Loan Servicing,” began with opening remarks for moderator Kathleen Engel, a law professor at Suffolk University and a national expert on predatory and subprime lending and consumer credit. Unlike the first panel, which focused more on the economic side of the issues, the second panel was a policy-based discussion.

After a luncheon address from Raskin, the final panel focused on one of the most pertinent aspects of student loans to college students: debt collection. The panel, titled “The Draconian Era of Student Debt Collection” and moderated by BC Law professor Patricia A. McCoy, reviewed the flaws in the complex system that allow for predatory student debt collection.

“Many students do not understand the differences in the loans they receive,” Dalie Jimenez, a law professor at University of Connecticut and a panelist, said. “Federal and private loans are very similar, and for most people it is hard to tell what kind of loan you have taken out.”

The discussion on collection focused mostly on the legal aspects of what are permissible tactics for collectors to use. One of the main topics of discussion was the role of private versus public loans in collection. If a person defaults on payments for a federal loan, the tools available to collectors are much more extensive than if one defaults on private loans. This means that collectors have no incentive to let the person know if they have a private or federal loan, Jimenez said.

As the conference wrapped up after closing statements by Rappaport Center faculty director Michael Cassidy, many of the participants stuck around talking about the problems and solutions discussed during the conference. The majority felt the conference was a positive step in finding solutions to the varying problems that make up the student debt crisis.

“With such a wide variety of experts from different areas, the discussion today provided a lot of innovative solutions to the burden of student debt that college graduates are facing,” Medvedow said.

Featured Image by Isabelle Lumb / For The Heights