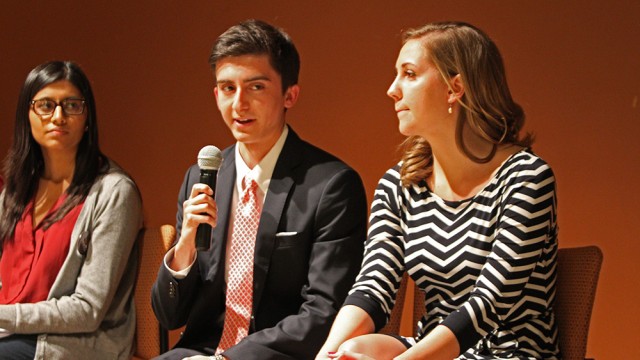 On the eve of the primary elections for Undergraduate Government of Boston College president, the Elections Committee held the 2016 UGBC Debate at 8 p.m. in the Vanderslice Cabaret Room. Russell Simons, MCAS ’17, and Meredith McCaffrey, MCAS ’17, received the most votes from the student audience—45—to win the presidential debate.

“Going forward, we hope to engage the other candidates in greater conversation about how to accomplish our respective goals for next year, since we hope this will allow students to be more informed in their voting,” Simons said in an email. “We believe in our mission of “Strength in Unity,” and are excited to continue sharing our ideas with the entire student body.”

The six teams of candidates discussed issues ranging from diversity concerns to the effectiveness of UGBC in implementing policy.

The first question asked candidates about how they would increase the support for the arts on campus.

Simons and McCaffrey would like to subsidize some of the ticket prices of the performing art shows in order to encourage more students to attend events. Meck drew upon his own personal experience in the theatre department when encouraging the administration to become involved.

When asked about gender equality on campus, Patel said she hopes to create a more equal playing field for women and men’s athletic programs. Ulrich and Miotti hope to create additional programming around women’s sports in order to increase campus morale as well. He hopes to organize pep rallies to help school spirit.

Patel would like to create a campus calendar for culture clubs, furthering efforts to promote events on campus. Patel and Arquillo also hope to encourage students of color to take on leadership positions for different organizations on campus.

McCaffrey countered Patel, adding that UGBC has already begun to create a cultural club calendar at BC. McCaffrey would also like to bring together organizations’ leaders in order to further discuss individuals’ goals and facilitate conversation on diversity issues.

Meanwhile, Perasso plans on encouraging individuals to come together and have open conversation. He is aware that UGBC cannot solve the problem of diversity on campus, but it can encourage student efforts for inclusivity, he said.

Meck and Barbosa’s team is also encouraging students to reach out to UGBC and have conversations about inclusivity.

“We want every student on campus to feel supported by us, and if not us, then the BC administration,” Barbosa said.

The Elections Committee also raised concerns about campus accessibility for disabled students. Ulrich drew on his personal experience with his disability when he was young, when he was temporarily paralyzed from the waist down.

“We obviously cannot change the campus in terms of layout, but we can change the accessibility,” Ulrich said. “The role UGBC needs to play in this is getting students in touch.”

Patel mentioned how she wants to publish updates of UGBC’s progress throughout the year, in order to connect further with students.

Meck said that he will discuss their campaign’s three main platform points, “transition, reform, and health” in their first Board of Trustees meeting.

The Elections Committee asked candidates how they would respond to the administration rejecting their policy points, even if they are backed by students.

McCaffrey noted that their goals must be “realistic and necessary” when working with the administration.

“We must come back and find different avenues to get the results we want,” McCaffrey said.

Perasso realizes that his team’s goals are rarely going to be accomplished and they are being open about that within their platform, he said. He wants to create a safe space for students when they can’t always accomplish their goals and need to take a break from perfection.

The Elections Committee then posed a question on BC’s Catholic identity and whether the University announces it too much, too little, or just the right amount.

Arquillo noted that the University also has an obligation to diversity organizations like ALC, GLC, and other inclusivity groups, in addition to focusing on its Catholic identity. BC must focus on the individual, Arquillo said.

Simons agrees that the Boston College is a Jesuit Catholic institution before anything else. He thinks, however, that the University must provide students the opportunity to be a complete individual, despite the beliefs of the University. He referenced LGBTQ and sexual identity issues.

“We need to be able to work within a Catholic framework to provide students with what they need,” Simons said.

When the Elections Committee posed a question on mental health on campus, Barbosa and Meck responded that their platform is centered around creating support for both mental and physical health. Miotti said that his team hopes to promote counselors and a mental health center in order to make students more knowledgeable about help on campus.

Perasso said he believes that the reason that BC students are the most documented students in the ACC for alcohol-related incidents is because the University’s policies are too strict.

“I am not sure that I believe that BC’s alcohol-related policies are too strict,” Fairhurst responded to Perasso.

The Elections Committee also asked candidates how they would better the experience for freshmen living on Newton Campus.

McCaffrey hopes to increase the frequency of Newton buses on the weekends and continue programming within the dorms to allow students to be more social. Ulrich added that BC should encourage more students to travel to Newton for events, like pep rallies.

When asked whether UGBC has a tangible enough impact on students’ BC experience, Patel and Arquillo noted that freshmen often don’t know what UGBC is doing.

“I will say that UGBC does do a lot of stuff,” Patel said. “I think it is more of an issue of students not knowing what is going on.”

Perasso noted that the administration is the problem with UGBC’s inefficiency. He and Loos want to focus on issues that are within students’ control, like playing WZBC over the speakers in Lyons Dining Hall.

To wrap up the debate, the Elections Committee asked the candidates what they thought was the most important issue that UGBC has to deal with in the coming year. Each team was given one minute and 30 seconds to answer the final question.

Perasso believes that biggest issue that UGBC must face is mental health, and the president’s efforts need to be focused on hiring additional counselors.

Simons, on the other hand, thinks that the president must encourage students to collaborate and work together. Miotti added that the strongest vehicle that students have is a sense of community.

Arquillo and Fairhurst touched on the same point in believing that the president must make resources available for students, while acting as a link between students and administrators.

Barbosa and Meck believe that UGBC should be concentrating on a multitude of student concerns.

“UGBC is huge, and we don’t have to focus on one specific thing,” Barbosa said.

This year, questions for the debate were drafted by students and the Elections Committee. The Committee requested that students submit questions through its online form over its Facebook page, which was sent to students over email.

In previous years, the ALC and the GLC were involved with the question creation process. Because there are six teams in the race, as opposed to last year’s three teams, the Elections Committee and Diversity and Inclusion decided to hold two separate debates in order to conserve time and allow more questions to be asked. Diversity and Inclusion will hold a Town Hall Event on March 30, the night before the final election for UGBC president.

Nick Minieri, the chair of GLC, said that he is unsure whether the Elections Committee and Diversity and Inclusion will hold two separate debates in the future. It was more feasible this year because of the extended election period, which spans over three weeks instead of 10 days, he said.