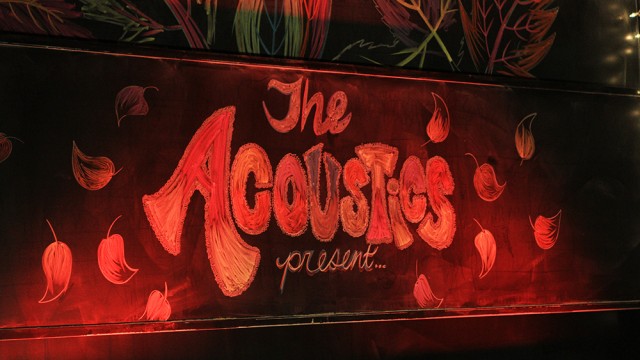 The phrase “sharing is caring” was aptly embodied at the Acoustics Spring Invitational this past Saturday night in Gasson 305. The cacophony that was the crowd’s anticipation seeped out of the packed lecture hall, as people swarmed in to find space on the floor to sit. The lack of seating didn’t deter anyone from squeezing in to see one of Boston College’s premier a cappella groups perform a few renditions of current pop hits and classics. Alongside The Acoustics were BC’s newest a cappella crew, The Common Tones, and Surround Sound from neighboring Stonehill College. Though the performance ran under an hour, The Acoustics Spring Invitational gave attendees a filling dose of soulful and intriguing covers that rang through the chock-full classroom.

The Acoustics kicked off the night with a rendition of Christina Aguilera’s “Ain’t No Other Man that set the passionate tone of the overall performance. Dominique Alba, CSOM ’17, took on the number’s lead vocals, displaying a versatile, stunning vocal range that garnered several shouts and whistles from the audience throughout the song. Sophomore Liz McGovern, MCAS ’18, blew the crowd back with her cover of Lady Gaga’s “Speechless.” Interjecting a few funny comments throughout the song, McGovern captivated the crowd with apparent ease, tackling a song that demanded a gravelly and quaint sound.

After The Acoustics’ opening set came The Common Tones, the newest a cappella crew of BC singers. Laura Galligan, LSOE ’18, led The Common Tones in an epic play through of Justin Bieber’s “Sorry,” which had everyone in the audience  snapping, stamping, or clapping. Reaching back to the ’80s, Sarah Rooney, MCAS ’18, took a stab at The Outfields’ “I Just Want to Use Your Love Tonight.” Both songs showed off the newly formed group’s prowess, proving to the audience that The Common Tones are just as talented as some of BC’s most reputed and oldest a cappella groups.

Next, it was time for Stonehill College’s Surround Sound to take the spotlight. Apparently “Sorry” was on more than a few of the performers minds, as Surround Sound had its own rendition of Bieber’s hit up its sleeve. While it’s easy to imagine that the duplicate song might’ve been unappealing to the audience, it was actually engaging to hear a second version. Sometimes, different groups’ styles sort of meld together, making the distinctions between groups hazy. With “Sorry,” the audience got to see an example of the varying approaches that a cappella groups will take with one song. While The Common Tones had the entire ensemble chanting the hook for “Sorry,” Surround Sound left that job to only one of its members. Whereas The Common Tones opted for a fast-paced, assertive cover of the track, Surround Sound slowed things down to give the pop hit a more soulful touch.

Returning with Billy Joel’s legendary “Piano Man,” The Acoustics began the closing set of the night. Josh Behrens, MCAS ’18, lent his vocals to the song’s main melody and brought out a harmonica throughout the number. “Piano Man” had the audience collectively swaying back and forth to the sullen, yet beautiful classic. Behrens and The Acoustics couldn’t resist having a bit of fun with the song, inserting his name in place of the piano man. The Acoustics closed out the night with an astounding mash-up of Kanye West’s “Jesus Walks” and Willy Moon’s “Railroad Track.” While at first the crowd seemed a bit flustered, expecting to hear “Jesus Walks” in full force, the audience members settled back in their spots once they realized what was unfolding before them. Alex Rougeau’s, MCAS ’18, quick, seamless rap took the audience by surprise, but resulted in overwhelming applause at the end of the song.

Some might have felt that The Acoustics Spring Invitational should have featured more from The Acoustics, which performed just four songs. Having the three groups, however, exhibited The Acoustics, Common Tones, and Surround Sound’s distinct styles. Onlookers also got a glimpse at the heartfelt community that the BC a cappella scene makes up. It was generous of The Acoustics to feature an up-and-coming a cappella squad, giving the Common Tones backing and viewership that might not come easily to a new group performing on its own.