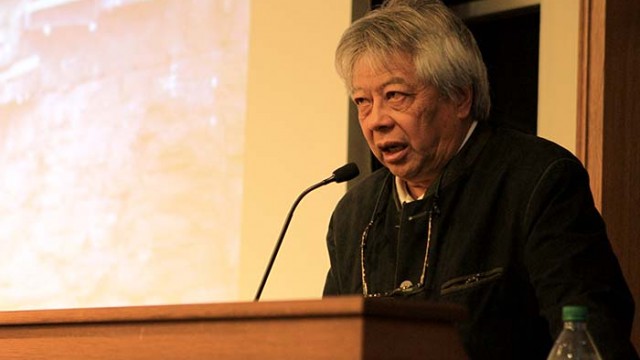 As a part of the Daniel C. Morrissey, BC ’88, and Chanannait Paisansathan, M.D., lecture series in Asian Studies, Dr. How Man Wong spoke in front of a packed crowd of students and professors inside of Stokes this past Tuesday. Serving as the president of the China Exploration and Research Society (CERS) since 1986, Wong discussed his career in exploration and wildlife conservation in China and the surrounding regions of Asia.

During his presentation, filled with videos and pictures from his travels, Wong talked about his four-decade-long work, which includes finding four river sources in Asia and leading numerous conservation efforts for endangered animals.

Born in Hong Kong, Wong studied journalism and art in college in the United States before returning to China to work.

“The whole world was open to me those days—with an inquisitive mind,” Wong said.

As an explorer, photojournalist, and creative writer, Wong has spent his career helping China ecologically by looking ahead before disaster strikes. His promising background led him to a job at National Geographic, and leading a group in 1985-86 from the world-renowned environmental conservation organization to the Yangtze River, China’s largest river.

“Our work is still relevant as we expand out of China.”

Wong described the team’s voyage through the often muddy and swampy terrain of China. They traveled by horse and car and slept in tents, he said and showed in pictures. They also used yaks to carry their equipment.

As Wong explained, he and his team succeeded in discovering a newfound source of water from a melting glacier on the Tibetan Plateau, which flows into the Yangtze River. And in tradition with all river expeditions, Wong further explained, he had to drink from this new, cold source.

“When drinking water, think about the source,” Wong said, quoting a Chinese proverb.

Wong said that as time went on and as technology improved, radar from space allowed photographs to be taken of Earth’s surface and the stuff below it. This very satellite-driven technology, claimed Dr. Wong, led to the discovery of the lost city of Utrar—a city located on the ancient Silk Road—as well as some of the thousands of planes that were lost in the Himalayas during World War II.

Dr. Wong expressed that with new technology at hand, he realized that he needed to reconsider his research on the Yangtze.

“I found out that 20 years ago I made a grave mistake,” Wong said.

Describing his return trip to the Yangtze, Wong assembled an even larger and more prepared team—both cognitively and technologically—that was able to find a new water source.

In subsequent expeditions, said Wong, he and his team pinpointed water sources for the Mekong and Yellow Rivers.

By exploring China’s geography, Wong recalled how this naturally brought him to studying and researching the animals there. One of those species, said Wong, was the Tibetan antelope. The problem, Wong noticed, was that poachers were killing Tibetan antelopes for clothing.

Wong described similar conservation efforts to protect endangered black-necked cranes in the Tibetan plateau. He also aided in rebuilding and preserving houses in villages that were being dismantled.

Although China has improved throughout the past four decades, Wong admitted, he would not allow this to stop his work from progressing onward and outward.

“Our work is still relevant as we expand out of China,” Wong said.