Home » Louis C.K. Delves into Deep Conversation with Day-Drinkers in ‘Horace and Pete’ 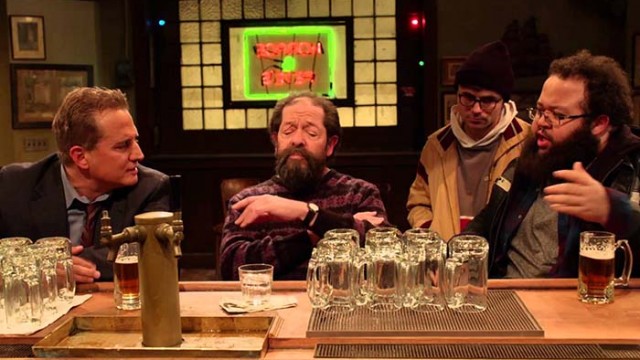 Louis C.K. Delves into Deep Conversation with Day-Drinkers in ‘Horace and Pete’

There has always been something particularly striking and intangible about Louis C.K.’s brand of entertainment. Describing his stand-up and television writing as honest or realistic might offer an insight to someone unfamiliar with him, but these adjectives ultimately fail to distinguish C.K.’s approach from that of any other run-of-the-mill observational comic. Defined by a certain raw, uncensored truth-telling that is entirely unafraid of forays into bleak or controversial subject matter, C.K.’s television writing—from his short-lived HBO sitcom Lucky Louie to his FX series Louie—injects meaning into everyday events in a way that seems entirely inadvertent, as if his thoughtful portraits of human interaction exist merely as byproducts of a sincere, undecorated writing style.

When C.K. appeared on Jimmy Kimmel Live! to reveal the previously unknown and unadvertised project, he described the essence of his show as “what the bar that Cheers was based on was probably really like between 2 p.m. and 5 p.m.” Indeed, the staged-play format of Horace and Pete decidedly avoids a grandiose set or anything truly visually stimulating. This tone is set in the first scene of episode one with a several-minute segment, in which Horace and Pete sweep up the dark empty bar while half-dancing in that way middle-aged men do. C.K. seems to consciously substitute the gimmicks of traditional television with engaging dramatic dialogue, an impressive feat considering the enduring assumption that stand-up comedians can’t successfully make the transition to television. Not only has C.K. proven to be an exception to this rule both in Horace and Pete and in other series, he has also demonstrated a rare ability to avoid the pretentious, groan-inducing one-liners that often plague the drama genre.

Though C.K. does typically succeed in providing a bare portrayal of the way we think, he seems to have overestimated his responsibility to discuss controversial issues in Horace and Pete. Every single episode includes an argument about race, politics, religion, or sexuality. Viewed as isolated scenes, these discussions are astute and relevant. Though these topics are certainly not unnecessary—and do, in fact, add dimension to individual characters—the exploration of such issues often feels forced. Put simply, it’s difficult to imagine the day-drinking regulars at any bar having a nuanced conversation about the afterlife.

Of course, this kind of criticism has to be evaluated against the fact that C.K. essentially controls every aspect of this show. The lack of studio regulation is demonstrated most overtly in the fact that episodes range from around 30 minutes to well over an hour. Even the show itself is accessible only through C.K.’s web site, where individual episodes are available for purchase. While giving C.K. the creative go-ahead has almost always proven to be a successful strategy (most notably in his FX series), it serves as a reminder that his work is effectively self-serving—in the best sense of the phrase. The artistic autonomy of Horace and Pete breeds a kind of television that is fulfilling and meaningful to C.K., not a studio executive or a target demographic. With that in mind, even the most devastating critic of Horace and Pete would have to concede that regardless of its potential flaws, it is unapologetically original.

louis ck horace and pete
Spring into Fashion with Denim, Chokers, and Cartoon Apparel
Anthony Jeselnik – Nothing is Sacred