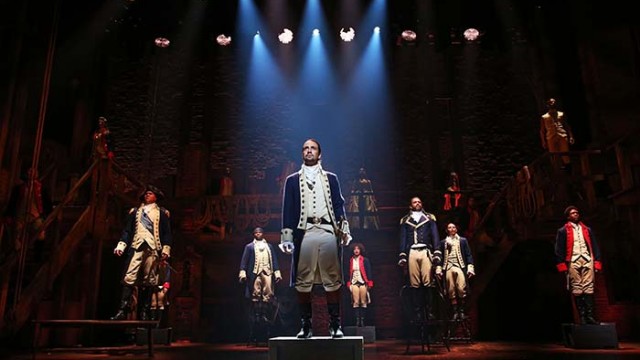 Ever since books were first published with covers, and back when adults first realized they could boss young kids around by disguising life lessons with dumb metaphors and idioms, people have for centuries preached the same sing-songy phrase. “Don’t judge a book by its cover,” they say with a haughty little smirk, almost always wagging a chastising finger at the listener while they’re at it.

While I completely understand the sentiments behind that tired, old saying, I was certain I could justify judging an overly-hyped rap musical by its petticoat.

When the Broadway show Hamilton first hit the stage in February 2015, I found myself totally incapable of stifling my incredulous laughter. Think about it. The performance features one of America’s most infamous founding fathers spitting rhymes instead of signing documents, honing his hip-hop moves when he should be penning eloquent letters.

As an incredibly enthusiastic critic of all-things arts and entertainment, I thought the whole thing sounded pretty darn preposterous. After reminiscing on my longtime career as a student enrolled in various Massachusetts academic institutions, I couldn’t recall a single iota of theatrical enjoyment any history classes had ever provided me. Here I was in the birthplace of the American Revolution—my entire life spent mere miles from Winthrop’s glowing “City Upon a Hill”—and not one of my history teachers ever got me hooked on American history. So I thought stubbornly while glaring suspiciously at the critically-acclaimed Hamilton soundtrack on Spotify, why start now?

Of course, I can appreciate a quality rap song when I hear one, but I wouldn’t say I’m at all enthralled by the genre. If I wanted a modern spin on my fourth grade American History lessons, I’d simply dust off my brother’s old Liberty’s Kids VHS and play Kendrick’s Untitled Unmastered in the background in place of the animated adventure series’ (undeniably catchy) theme music. Why pay hundreds to watch a glitzy Broadway biopic of an adulterous historical figure beatboxing when you could spend that money on, well, anything else?

I began compiling a list of things one could buy today that would prove far more valuable than Hamilton tickets—400 average-looking goldfish, 25 of those weird child leashes, a $200 Blockbuster gift card—when my curiosity got the better of me and my finger pressed play on Spotify’s Hamilton (Original Broadway Cast Recording) soundtrack. “Pff,” I thought haughtily to myself with a scoff. “Considering all the hype surrounding it, this thing better be the greatest contribution to society since Sour Patch Watermelon and the implementation of instant replay review in major league sports combined.

To my surprise, and initial chagrin, it is.

Every song on the soundtrack is an unquestionable hit—a perfectly-produced, rap-infused ode to one Alexander Hamilton, who turns out to be a pretty kick-ass supporter of the Constitution. Of course, if someone slapped an impressive rap/R&B album and intricate dance choreography onto my relatively ordinary life story, I’m pretty sure I’d seem like the coolest college kid on the block, too. But the thing about Hamilton is that it isn’t ordinary—not in the least. Rather than detracting from its quality, the musical’s outlandishness and blatant, bizarre nature only adds to its ever-growing hype.

Hamilton creator Lin Manuel-Miranda is a genius—and not simply because I now have a new guilty pleasure playlist at my disposal. He’s a groundbreaking artist who created meaningful, poignant, and thought-provoking content that’s unlike anything already out there.

Ultimately, I blame Boston College’s Easter break for providing ample time for me to check this thing out. The more I think about it though, I blame myself for being so close-minded. I let my initial, knee-jerk reaction—one that said “no way” when Broadway began boasting a Burr vs. Hamilton rap-duel instead of a real one—limit my idea of what art qualifies as worthy.

If there’s one thing I’m sure of, though, it’s that I blame Hamilton. Soon, I’ll be out a few hundred bucks when the show comes to Boston. You can bet that I’ll be there.