Home » From the Middle East to Westeros: A Flickering Light in Syria 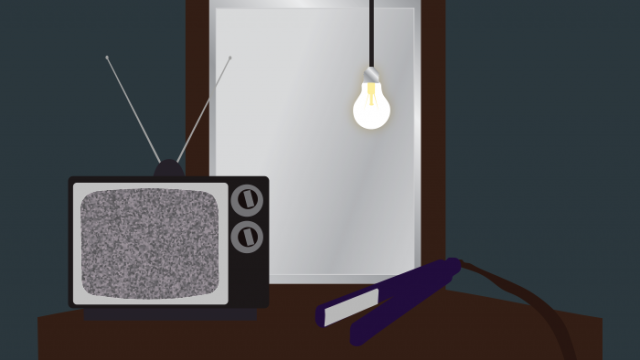 From the Middle East to Westeros: A Flickering Light in Syria

Editor’s Note: In 2014, Layla Aboukhater, like many Syrians, packed up her life and escaped from the violence of her home city, Aleppo, in search of a peaceful existence. This exodus led her to the United States and ultimately to Boston, where she quickly applied and was accepted into the class of 2018 at Boston College.

At 3:15 a.m. I woke up to the most beautiful sound: beeping. That beep beep beep of the washing machine would go on every time the power went back on. I knew there would be at least another 45 minutes of electricity. As opposed to other cities in Syria, in Aleppo no one knew when the power would come on or go out, but it was always at the hour mark.

To say that I jumped out of bed would be an exaggeration. Sleeping over two woolen sheets and under four thick blankets, it took me a while to untangle myself from the blanket fortress I usually slept in during the colder months. I rushed to the kitchen, put a pot of water over the electric stove and hurried to look at my electric to-do list for the day. I was hoping to get everything done as fast as possible, to use whatever time that was left before the power went out again to continue Game of Thrones.

The day before, the power went out just as I was 10 minutes into a Game of Thrones episode—things were getting intense, and my man Jon Snow was in trouble. I tossed and turned that night, not because of the nearby shelling and ground-shaking missile strikes—you get used to that. What you don’t get used to is how many times dear Jon ends up in near-death situations, so I lay there worrying about him, and about Bordeaux.

Bordeaux was where we usually went to party, and we had a party there the next night, and I desperately needed some electricity to prepare myself. So motivated by my need to look on-point that night while also having some extra time before the power went out again to check on Jon, I started plugging in all my electronic devices to charge. Next I printed out eight copies of “50 Shades of Mad-Libs” for the sleepover after the party, a fail-proof way to pee your pants laughing. I turned on the electric heater and directed it on an upturned chair, on which my damp laundry hung. Next: beautifying. I turned on the flat iron in an attempt to straighten my wild hair for the upcoming party, and attacked my constantly growing unibrow with the tweezers while the iron heated.

I usually don’t put myself through the excruciating pains of hair straightening, but that day I had calculated that the party wasn’t going to be a hot, sweaty one. It was December, freezing outside, and whatever electricity the generators were going to muster up was going to be used for the lights, the surround sound system, and making sure that the bar was bright to attract as many customers as possible because the unenforced drinking age was 18. No power would be wasted on heating, which was perfectly fine, because I knew that the masses of YOLOers like me would warm the place with body heat as we danced to the usual mix of Arabic and English music. One moment we’re singing along with Mohamad Iskandar as he exuberantly serenades the woman who reigns his heart, next we join Sia as she screams about being bulletproof. Looking back, I’m glad ISIS didn’t take us too literally.

As I straightened my hair, typically, my dad walked in just as Renly is going down on Loras. I burnt myself with the flat iron trying to switch off the show quickly, but I don’t think I was fast enough. After he turned on the water pump, which I always forgot to do, he awkwardly said goodnight and went back to bed. I got to see Arya rescue A Man, aka Jaqen H’ghar. In retrospect, I wish she had left him to burn. But the power went out before I could see the last 10 minutes of the episode, leaving me worrying about Arya’s fate now—another sleepless night. Keeping up with the Starks was taking its toll on me.

I accepted my defeat and decided to call it a night. I went to get my clothes hoping, they had enough time to dry, only to find that the cat and the dog thought the makeshift drying rack was a nest for them, so I pulled out my now not only damp, but fur-covered clothes from underneath their groggy butts. The water was ice cold because in my hurry I forgot to turn the stove on, so I decided to skip the shower. Besides, I could shower at my friend’s house—she owed me three showers so far. At this point my hair was half straight, half electrical-shock style, my laundry was soaking wet, covered in fur, and smelled like wet dog, and my dad thought I was into medieval gay porn. Perfect.

I dug back into my blanket fortress, hoping to sweat off the straight half of my hair, and fell into a fitful sleep dreaming about Jon Snow straightening his beautiful, messy, black locks that caused The Wall to melt, and The Islamic State of White Walkers charged in and bombed everyone with RPGs and wildfire.

But other than the bad dreams, everything went well that Saturday night: we partied—hard—my hair was a mess (but let’s face it, that’s just how I look), and we drank cheap vodka mixed with pineapple juice. As usual, we sang along with Iskandar and Sia, peed our pants with laughter during the sleepover, and Sunday was morning Mass and then cramming for upcoming tests—life just went on as usual.

A few days later, a funeral procession for a fallen soldier went through our street, shooting their kalashnikovs into the air, and a kid got hit with a cold bullet and died. A funeral and two midterms later, the Aleppo University bombings took place at the architectural school down the street from my home. We got off easy, some of our windows and doors burst out of their frames, and my mom and Roxy, our lab, who were in the garden, were able to run inside before the hail of rocks and debris covered where they had been. But the bombings killed at least 82 people, including students and children. For two days people were searching for a Carmelite nun and the kid who ran errands for the local supermarket, both of whom had disappeared around the time of the bombing. People were hoping to find them misplaced in a hospital or to find their remains. But nothing was found of the nun because there nothing was left to be found— she happened to be right at the detonation spot. As for the boy, his remains were found on the roof of a nearby building. This all happened on the first day of final exams. They got pushed back two weeks, but afterward we went to another party celebrating the end of the delayed exams—life just went on as usual.

Back to the present, and it’s three weeks until the season six premiere, three more weeks filled with anxiety about Jon Snow’s fate again. But this time I’m in the States, where the power situation is more reliable, and I’m actually looking forward to being able to watch an entire bloody episode in one sitting. I’m at Boston College now, where most of the action in my life is courtesy of drunk seniors setting Iggy on fire every other week, Netflix, the BC movie Web site and the Fenway Regal theater, where I get my healthy dose of violence, gun shooting, and explosions from movies like The 13th Hour and Deadpool, from the safety of the very comfy reclining chairs.

So yes—compared to Syria, it is a bit safer and, therefore, lame, but if you take the danger thrill away, it’s exactly the same—underage drinking and sweaty kids crammed into an overcrowded space with cheap vodka and awesome music.