The Japan Club of Boston College’s annual Harumatsuri, a Japanese spring festival, was a nightlong celebration of culture and art. Before the performers took to the stage, JCBC’s culture chair Yoyo Kwan, MCAS ’18, asked a simple question.

“How many of you in the audience are Japanese?”

About a third of the 150 or so audience members raised their hands. While a sizeable group, it was obvious that perhaps a majority of the attendees came from a variety of cultural backgrounds. According to Kwan, the night’s event was not just for those of Japanese descent. Rather, the event catered to all individuals who have been touched or influenced by Japanese culture. Kwan advocated for individuals to become cultural allies, or persons who support and foster growth within a community—Japanese heritage isn’t a requirement for JCBC membership. The club exists to help all individuals claim their personal narratives and explore the intersection of traditional culture and the American experience.

The first performance of the night was a Kabuki theatre rendition of six scenes from The Lion King. Kabuki is a genre of Japanese drama that involves highly stylized dance sequences, songs, and body movements. Although the performance lacked dialogue, the intensity of the drama was portrayed through exaggerated gestures and forceful vocal expressions, and the choreographed dancers moved across the stage with ease and fluidity. With this style, the performers thrilled the audience with renditions of famous scenes such as the death of Mufasa and “Hakuna Matata.”

Another crowd favorite was a rendition of “Sound of Love and Rainy Skies” by the popular J-pop group AAA. The performance was full of energy and enthusiasm. It started with a single vocalist on stage, and with the addition of each verse came the entrance of another singer. The backdrop included a lyrics sheet written in English, so non-Japanese speakers could follow along with the music. The crowd seemed particularly excited when Ken Leszkowicz, MCAS ’16, walked onto the stage. As co-president of JCBC, Leszbowicz is a well-known figure in the community. His mid-range croon captivated the audience and brought out bursts of cheer and laughter.

One of the night’s highlights came from guest performers Genki Spark. This multi-generational, pan-Asian women’s collective performed Japanese Taiko drumming. The performance was uncompromisingly powerful. Harkening back to Kwan’s earlier sentiment, Genki Spark was outspoken in regards to claiming and embracing its members’ cultural narratives. The group was started and served as an avenue for both Asian and women’s empowerment.

Many of the members discussed feelings of alienation and separation growing up in American society. Genki Spark started as a way to take back control and become more active in the shaping of the multicultural American experience. This mission statement went well with the actual content of the performance. The drumming sounded like undiluted power. It wasn’t something that the performers could hide behind. Rather, each of the women, while positioned behind their drums, seemed to brim with self-confidence and poise. After a few songs and demonstrations, the group sought out audience participation.

Genki Spark seemed to capture the theme of the night: building a broader community of cultural acceptance. While the night was dedicated to exploring and displaying Japanese culture, it also sought to acknowledge the multicultural condition of BC’s campus. Many of the performers came from a wide, often multicultural background. 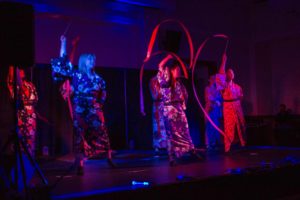