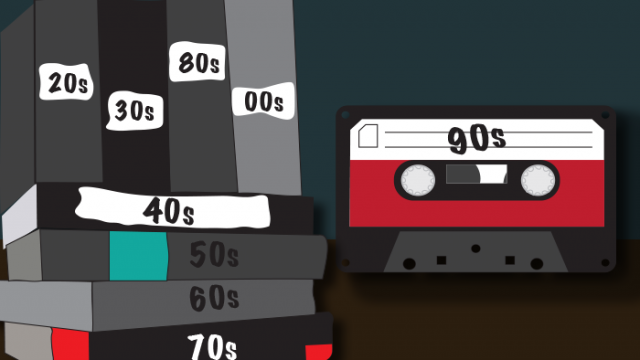 We have all thought, maybe for just a moment, that it would be cool to live in another time. We glorify the past and how things used to be. As we look at our favorite music, television, and movies from times past, our beliefs seem to confirm themselves. Sometimes we wonder what life would be like if we had grown up in a different time. To experience Star Wars on opening night, to see the long since disintegrated band live, or to live among a culture that has been, temporally, completed obliterated. Though a manner of speaking may have fallen away, hairstyles have died, movies have been made, and records have been released, the memory of these times call out to us and bring us to a different time and place.

We have the remnants of time always before us. Our libraries span time. As we look back at the ’80s, we imagine Ash slaying demons in The Evil Dead and David Lee Roth belting out “Hot for Teacher” off of Van Halen’s latest album, 1984. Maybe in the late 1970s we’d tune into the original Battlestar Galactica and relish in the “state of the art” special effects and recognize its topical Cold War undertones. Maybe we would like to sit in a club just outside of Hollywood in the 1940s, listening to Frank Sinatra sing “You’ll Never Know” with a cigar and newspaper in hand. These things take us places, places we may have never been. These small pieces hold enough to paint a picture of a place, or at least a part of one.

Today, turning on the television and watching films would have us believe that the past was the place to be. It may seem at times that everything and everyone who was anyone had already had their time in one way or another. Mad Men displays an old-school style of force and chauvinism. That ’70s Show may have us reeling at the styles of the time, while trailers for the upcoming The Nice Guys film has us taken aback at that same style and tenacity. Something is fascinating about another time. While we look at the future with uncertainty and wonder, sometimes we look back at times past with the same amount of wonderment.

This idea is an interesting one mostly because we have no idea what kind of rabbit hole we may enter when we look back to the past. Though living in the Roaring Twenties would surely be a trip, would we have the capacity to live in the time? Could you sound the bee’s knees? What would life be like to live amid counterculturalism of the ’60s? How would we react to The Beatles embarking to America and the “British Invasion.” Could we grasp, cope, or comprehend the bizarre styles of the ’70s?

I had always been a fan of ’90s music and culture. It was not the most foreign or out-there, and its similarities to the current age were more apparent than styles of other decades. It shares enough in common with the modern age to remain mostly relatable. I seemed to just miss living in the time by a decade or so. But the more I think about it, I only comprehend a sliver of what the time was all about. For the most part, I ignore or am ignorant of the faults of the era because I have been able to cherry-pick its best parts. I get to take it. Not live it.

Moreover, as an individual, I am a product of my environment. Nature and nurture. Changing any of that would certainly change who I am and what I like. That makes all that happens now, though it might not be all we hoped it would be, our time. The time is now. Though we long for a fashion that is long gone and though we may wish we could have lived in another age, we would do well to appreciate what is happening all around us.

So go see that movie while it is still in theaters. Remember that new song while it is still new. Turn it up. Before we turn into antiquity, we ought to makes memories about this time. Who knows? Maybe someone in the future will wish to live in our time.

Instead of wishing for another day, we could all make time for today. We only get one shot at it.

Bob Dylan, a man from another time, says as much in “Open the Door, Homer.”

“Take care of all your memories / For you cannot relive them.”