The plan for the $200 million project to construct new athletic facilities on the Boston College campus is being petitioned for its lack of competitive resources in the realm of Division I athletics.

Last week, an online petition was posted on change.org with the goal of collecting 500 signatures. According to the explanation, if the desired number of signatures is gathered, the petition will be delivered to BC Athletics.

The current plan includes a new recreation facility that will replace the Flynn Recreational Complex, as well as a field house and fields for use by various athletic teams. The anonymous author of the petition identifies himself as “BC EAGLES ALL” and begins by describing his excitement about the project. From there, the author moves on to list all of the problems he sees with the project’s plan.

“That new plan will replace the Plex with an under-performing facility that will not meet the needs of intercollegiate athletics, will not appeal to prospective students or recruits, and will actually reduce the options for students to stay active on our health- and fitness-minded campus,” the author writes.

The pool and tennis courts are of particular interest to the author, who explained that, in order to compete with other swimming and diving programs in the Atlantic Coast Conference, the BC team will need to have access to a pool that is either 25 yards by 50 meters, or 25 yards by 25 meters with a diving well. The author said that the pool that BC plans to build does not reach these standards.

When asked about the petition, Director of Athletics Brad Bates responded by saying that faculty members in his position routinely receive these types of petitions, which often contain inaccurate information. Therefore, it is the athletic department’s policy not to respond to them.

According to Bates’ announcement on Feb. 22, the construction for the project will begin this summer, and is predicted to take two years to complete.

“The plan in the works for the new recreation complex will reflect the University’s needs and address the evolving demands of intercollegiate athletics at Boston College,” Bates said.

brad bates BC athletics the plex petition
‘The Walking Dead’ Seemingly Walks Out on Viewers with Hapless Storylines
‘The Ranch’ Remains Conceptually Banal, Despite Rustic Execution 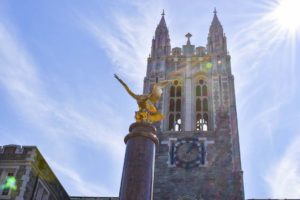