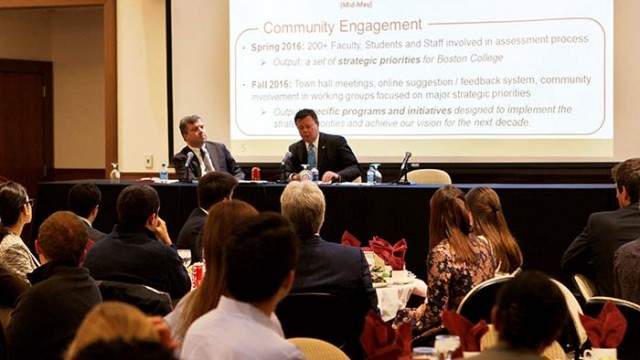 Monday evening, the Undergraduate Government of Boston College and the BC administration hosted a dinner entitled “Boston College Looking Forward.” The event allowed students to discuss their visions for the future of BC while the administrators in attendance facilitated the discussions and recorded students’ answers.

“We made this hybrid event as a starting point, to have more events like this going forward,” Sloan Renfro, UGBC vice president of student initiatives and MCAS ’16, said.

Hosted in the Heights Room in Corcoran Commons, about 60 students discussed issues of school diversity, upholding Jesuit ideals, and the lack of proper communication between UGBC and some members of the administration.

Administrators made it clear at the beginning of the session that the night was not meant to answer specific questions but rather to produce questions to be considered during the administration’s “18-Month Process” for strategic planning.

“Looking at the timeline, there is a lot of opportunity being planned in the fall for feedback based on what we’ve learned here, and how we’re moving forward as a steering committee,” Vice President for Student Affairs Barbara Jones said.

“From both the administrator and student perspective, an event like this happening every semester would be really helpful and really important so that we can continue to work together as opposed to working as two separate entities.”

UGBC and the administration aimed to form an atmosphere best-suited to a casual, welcoming environment, where students felt free to provide their opinions and experiences.

Additionally, UGBC saw the event as an opportunity for students to get closer to administrators, Katie Lamirato, UGBC director of transparency and MCAS ’18, said.

“I think we had really good conversations with UGBC at the start about how we might be able to make the event work, and a lot of it was their vision combined with what the University was looking for in terms of student feedback, and I think it turned out really well,” Jones said.

Before students delved into smaller group discussion, Executive Vice President Michael Lochhead and Provost and Dean of Faculties David Quigley explained the goals of the night.

“What kind of university do we want to leave for those that come next?” Quigley asked the audience. “What does the world need Boston College to be? Right now is not about building the wish list of what we want to do.”

He further explained that the steering committee, a group of 24 different committees within the 18-month process for strategic planning, is taking this semester to assess the greatest issues.

Students’ ideas included improving school spirit, offering a STEM degree, and improving BC’s diversity. Some students, however, thought that the confrontational nature of other students, in their actions toward the administration, has not been productive.

“I feel like sometimes different groups of students at BC have almost been confrontational to the administration,” Kanitkar said. “And I think that has been counterproductive to the conversation at times.”

Committees within the aforementioned strategic planning process will each include a diverse group of faculty, staff, members of UGBC, and general members of the student body. The diversity of the committee will allow the steering committee to most accurately decipher what matters most in “Looking Forward” to the future of BC.

Several students were pleased to see their ideas proposed to important administrators throughout the course of the night. Others, however, noted the fact that their ideas may not get serious consideration until next year, when the administration reports to the Board of Trustees.

Lamirato said that increased dialogue between the student government, the general student body, and the administration would be beneficial, and that hosting a similar event each semester would help to accomplish this.

“From both the administrator and student perspective, an event like this happening every semester would be really helpful and really important so that we can continue to work together as opposed to working as two separate entities,” Lamirato said.