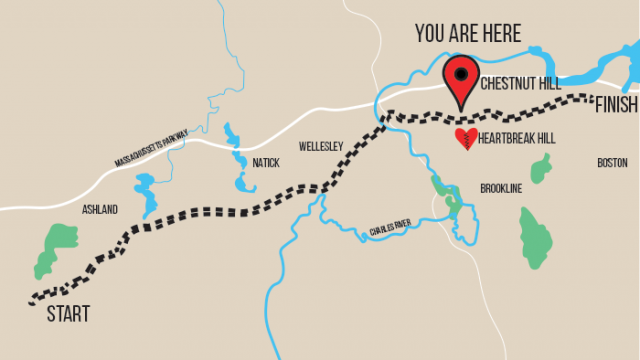 With Dana-Farber Team, An Opportunity to Raise Funds, Honor Family

Although the biting wind and blanket of snow on the ground might not agree, spring is here, and the 2016 Boston Marathon is right around the corner.

On April 18, Bostonians and spectators from around the globe will gather along a 26.2-mile course to cheer on the many brave souls determined to complete a race made even more demanding by Boston’s many hills.

According to the Boston Athletic Association (B.A.A.) Marathon fact sheet, 30,000 runners have officially entered the 2016 Boston Marathon, and approximately 1,000,000 people will attend the Marathon as spectators. Ninety thousand additional people are expected to attend the Marathon’s 39th-annual John Hancock Sports and Fitness Expo on April 15.

The expo will feature over 150 exhibitors showcasing the cutting-edge technology and strategies in the running world. Admission will also be complimentary, and attendees can expect to see representatives and exhibits from companies such as Adidas, Gatorade, and Clif Bar.

The same fact sheet also predicts that the Boston Marathon will generate $181.9 million dollars for the local economy.

With these large numbers, and people attending events that begin three days before the Marathon itself, Marathon organizers are prioritizing safety. In addition to the almost 2,000 medical personnel and over 3,000 security personnel overseeing the Marathon, 4,176 members of the local, state, and federal law enforcement will be present at the 2016 Boston Marathon.

And although the Marathon is an important event that marks the progression of society, as well as giving cause for celebration, and a reminder of unity within the city of Boston and beyond, it did not always have such a wide reach.

Organized by the B.A.A. in 1897, the Boston Marathon began as a single event in the larger Boston Athletic Association Games. As would become tradition, the race was held on Patriot’s Day, but at this early date, only 15 runners participated.

As the decades progressed, the Marathon gained traction and world-wide attention. Patriot’s Day became an official holiday in the state of Massachusetts, which resulted in an increase in marathon spectators.

Men from around the world participated in the Marathon, and, in 1966, Roberta Gibb became the first woman to complete the course. Her entry was unofficial, however, and it was not until 1972 that women were officially allowed to enter the Marathon. From there, the Marathon continued to evolve, gaining a wheelchair division, a cash prize, and breaking numerous records.

This year will mark the 50th anniversary of Gibb’s famous completion of the Marathon, and in honor of her achievement, and in celebration of 50 years of women running in the Marathon, Gibb will be Grand Marshal for the 2016 Marathon. According to the B.A.A., events throughout the week of the Boston Marathon will be held to honor the participation of women in the race, and Gibb will ride just ahead of the runners to alert spectators of their approach.

“Gibb changed the course of running history five decades ago, setting the stage for generations to come,” B.A.A President Joann Flaminio said in the organization’s press release.“Bobbi will lead 30,000 runners, including more than 14,000 female entrants, on their way to Boston on Patriots’ Day this year.”

This year will be another big year for the Boston Marathon, which has only become a stronger point of public focus after the tragedy of the Boston Marathon bombings in 2013. Just this past Saturday, Boston Mayor Martin J. Walsh, WCAS ’09, and Massachusetts Governor Charlie Baker unveiled this year’s tribute to the victims of the bombing: a large blue and yellow banner emblazoned with the words “Boston Strong.”

According to Boston.com, the tribute is located on the Bowker Overpass hovering over Commonwealth Avenue, positioned so that the runners can see it as they near their final mile.

Ever since he was a freshman, the Boston Marathon has been an important aspect of Boston College for Chase Ryan, MCAS ’16.

“I come from a small community in Montana, so to see the hype and energy and to see how many people came out for Marathon Monday my freshmen year was such a highlight of my BC experience,” he said.

This year, however, the economics major will be on the other side of the day, as a runner with the Dana-Farber Institute’s Boston Marathon team.

The Dana-Farber Marathon Challenge (DFMC) raises funds for the Claudia Adams Barr Program in Innovative Basic Cancer Research. DFMC began in 1990 and since then has raised over $74 million. The program has helped improve survival rates and quality of life for cancer patients. For the 2016 Boston Marathon, “the DFMC team aims to raise $5.4 million in pursuit of the ultimate finish line: a world without cancer,” according to the program’s website.

Ryan is excited to work with the DFMC team, but his involvement is motivated by a difficult past.

“When I was in high school, my mother battled cancer,” he said. “We were just so blessed with early detection that my mother never doubted that she would pull through.”

Ryan’s mother has since recovered, and this year his family is celebrating five cancer-free years. Since so many people that he has met at BC have also been affected by cancer, he decided to run.

All runners who gain a bib number through a charity have to raise a minimum of $5,000, but Ryan has a higher goal of $11,000. He has had to be creative in his fundraising approaches, starting with a letter campaign. In his letter Ryan outlines his reasons for running, the history of the DFMC and the Claudia Adams Barr program, and how family and friends can donate.

“After experiencing the marathon festivities at Boston College’s ‘Mile 21’ in years past, I look forward to being a part of this iconic race and of greater importance, raising funds for a meaningful cause,” Ryan wrote.

Ryan also enlisted the help of his two favorite teachers at Core Power Yoga, a yoga studio he goes to frequently. The teachers hosted a fundraising class for his campaign, asking people to donate whatever they felt comfortable with. The fundraising event had over 50 people in attendance and Ryan raised over $1,000.

“BC is a very giving and philanthropic community and emphasizes giving back,” he said.

Raising $11,000 and running 26.2 miles are no small feats, and the journey has come with several challenges. But when the challenges arise, Ryan said he finds motivation and support in his family, close friends, and fellow runners like Madison Meehan, MCAS ’16, who is also a member of the Dana-Farber Marathon Challenge team.

“The Dana Farber team couldn’t be more supportive,” he said. “They have so many resources and team meetings and committees that help us brainstorm.”

One of the coaches is Jack Fultz, who won the Boston Marathon in 1976 and has helped develop training programs for runners of all levels. There are weekly track workouts at Tufts University and group runs on Saturday or Sunday mornings.

“It’s very motivating to have others pushing you and make you want to get out bed when you don’t want to run 15 to 20 miles by yourself,” Ryan said.

Finally, the night before race day the team will host a pasta dinner for all the runners and their family members.

In 12 days, on race day, Ryan’s friends and family—including his mother—will be on the sidelines cheering him on.

“I think [my mom is] proud that I’ve taken the initiative to join Dana-Farber and help those who aren’t as fortunate with diagnosis and timing,” he said. “I think she’s very happy.”

Ryan encouraged anyone who may want to run the Marathon to go for it.

“It’s great to have a challenge and if you’re running for a charity, to have something to work towards that’s greater than yourself,” he said. “It’s a phenomenal opportunity.”

For Madison Meehan, MCAS ’16, member of the Women’s Varsity Soccer Team, this Marathon will be more than just about watching the participants go by and having a good time—she will be one of those running by the Mile 21 sign this April 18.

“I’ve always been a runner, since high school,” she said. “But this is the first time I’ll run a marathon.”

Meehan, along with Chase Ryan, MCAS ’16, both joined the Dana Farber team for the Marathon in order to raise money for cancer research.

The Dana-Farber Marathon Challenge, in which more than 400 runners run in order to raise funds for the Claudia Adams Barr Program, has made large contributions to cancer research since its inception in 1990.

Because Meehan has had a lot of free time during the spring semester since the women’s varsity soccer team is not in season, she decided to run.

“When I decided to run, I began looking at different charities I could support,” she said. “I saw the Dana Farber team and immediately thought it would be a good fit.”

Like many of the runners taking place in the Marathon for the DFMC team, Cancer has personally affected Meehan. Her father passed away from Leukemia two years ago after a long fight. She found no better way to honor his memory than to run for the cause and raise money for future research.

To be part of the team, the runners must raise at least $5,000, for the charity. However, due to the large support network that Meehan has developed over the years she has been able to not only reach that goal, but has surpassed it with over $29,000 in donations to date.

Meehan said that no one reached out to me in order to run, that it was all of her own decision after hearing from one of her friends who’s also on the team.

While her high school track experience helped during the training, going beyond the normal six miles she would run during practice was a tough adjustment.

“We have a specific week-by-week training regime to get us in the shape we need to be to run it,” she said. “Taking it week-by-week definitely helped my mentality and got my body used to the longer distances we began to do.”

One of the main sources of support for her has been her friends and family, with many at BC being very supportive of her and her cause.

“While I am running a lot of the time, I don’t think about much other than the road ahead,” she said. “I concentrate on what I have to do. I also think of all of the support I’ve received, and that keeps me going.”

She says there are days where she doesn’t feel like running for various reasons, but when those doubts creep up, she thinks about her family, friends, and the cause in order to muster the energy to go out and run that day.

Having all of her friends and family checking in on her to see how she was doing has helped her more than they can imagine, she said, and their support has been incredible, even beyond the donations.

Running the 26.2-mile course for professional marathon runners is not an easy task, so for others who are not used to it it requires an immense amount of dedication. However, anyone can do it, Meehan said.

“If you follow the training regime [the team] gives it is possible for anyone to do it,” she said. “You just have to think about why you’re running, and it gets easier.

boston marathon dana farber
Previewing BC Hockey: What to Expect in the Frozen Four
Amid BC Buildings, Eight-Foot Walls Aim to Raise Awareness on Conflict