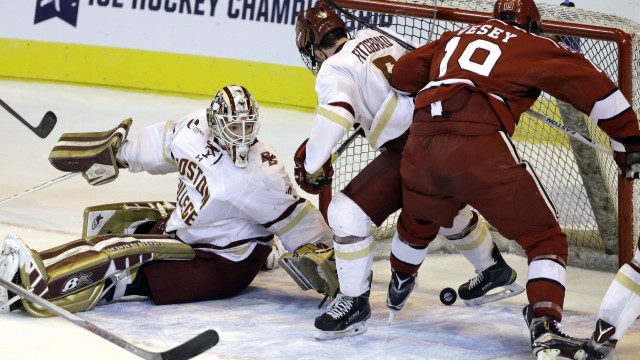 TAMPA, Fla. — Just because the college hockey season is over for some doesn’t mean the accolades stop coming. Players tend to not focus on awards, especially in the wake of defeat for their respective teams, preferring only to focus on raising a championship trophy over their heads at the end of the season. But when it comes to winning college hockey’s most prestigious honor, a season can be memorable without a banner. For Harvard’s Jimmy Vesey, that season is this season.

Announced at the Tampa Theatre on Friday evening, Vesey has won the Hobey Baker Award for the best player in college hockey.

Vesey is the fourth player in Harvard history to win the award, joining Mark Fusco (1983), Scott Fusco (1986), and Lane McDonald (1989). The senior forward from North Reading, Mass. finished 17th in the nation with 46 points—24 goals and 22 assists—despite playing the fewest games out of any player in the top-75 (33), given Harvard’s minimized schedule. He is a two-time Hobey Hat Trick finalist and two-time First-Team All-ECAC. Vesey also won ECAC Player of the Year in 2015-16. The left winger made waves in the hockey world when he turned down an offer from the Nashville Predators, the team that selected him in the third round of the 2012 NHL Draft, to graduate Harvard with the rest of his class and go into the summer as an unrestricted free agent.

In the process, Vesey beat out Michigan’s Kyle Connor and Boston College’s own Thatcher Demko.

Connor, a freshman forward from Shelby Township, Mich. was the nation’s leading scorer of 2015-16 with 71 points, as well as the country’s top goal-scorer with 35. He also had 36 assists, tying him with New Hampshire’s Tyler Kelleher for third place. Earlier this season, he was named Big Ten Freshman of the Year and Player of the Year. Connor is a 2015 first-round draft pick of the Winnipeg Jets and is likely to sign after this season.

Demko, a three-year starter for the Eagles, finished eighth in the country among qualifying goaltenders with a 1.88 goals against average, and fourth with a .935 save percentage. He would, however, come away with another prize—the Mike Richter Award for the nation’s best goaltender.