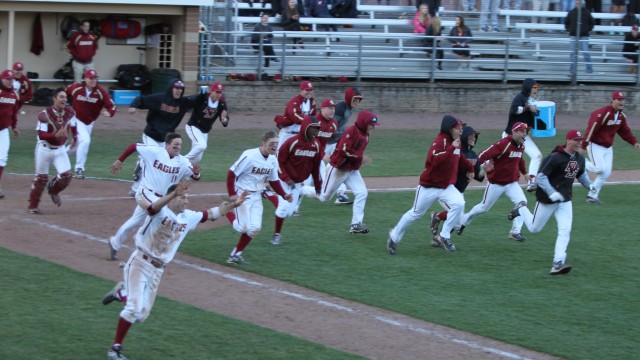 It isn’t easy to tie in baseball. You have to dig deep into the subsections of the rule book to find the rare cases when it may happen in the Major Leagues, and even then it’s not even called a tie but a “suspended game,” which is supposed to be made up at some point in the season. That doesn’t mean it never happens—the Houston Astros and Cincinnati Reds finished a game in a tie as recently as 2005—but pretty damn close to never.

It’s a bit more common in college baseball, where the conference schedule is so set in stone that any games cancelled over a weekend, such as the two Boston College baseball had against Florida State a week ago, cannot be made up. It’s still very uncommon, especially with lighting fixtures at parks, but on Sunday afternoon, BC came about two minutes away from ending without a winner or loser.

That is, until Scott Braren made it 5-4.

After Michael Strem flew out to start the bottom of the 13th—the longest game for BC (16-11, 5-8 Atlantic Coast) since March 21 last year against North Carolina State, and the longest for its opponent, No. 16 Virginia (20-14, 7-8), in its ACC history—Johnny Adams picked up his first hit of the series: a double into the right field gap. A walk, a strikeout, and another strikeout left the bases loaded for Scott Braren, who had pinch hit a few innings earlier for Donovan Casey after the right fielder injured his left hand on a slide into second.

Braren walked up to the plate at 6:05 p.m., just five minutes before the 6:10 cutoff time. That doesn’t mean the game would have ended immediately at 6:10, but no new innings are allowed to begin after that time. This rule is in place to protect the travel plans of teams flying home on Sunday, who are already required by the ACC to book the latest possible flight to minimize such cutoffs.

That time never came. At 6:08 p.m., five hours and one minute after starter Mike King had fired the first pitch, Braren knocked a single in between first and second, bringing Adams home from third and his team flying out of the dugout, mobbing him on his way toward second.

“I hadn’t been in that position, so I didn’t really know what to do,” Braren said. “It was a feeling I’ll definitely never forget.”

Walk-off wins are the best kinds of wins pic.twitter.com/xpYMqWdspt

This base hit by Braren gave BC a big series win in the ACC, in which the team has struggled since taking two of three from NC State in the opening weekend of conference play. But the Eagles almost hadn’t gotten that far, having to come far from behind in the 10th.

BC had already stolen one game from Virginia on a walkoff strikeout the day before, and had rallied once to take a 1-1 score into extra innings. In the top half of the frame, righty John Nicklas returned for his third inning of relief, looking sharp after allowing a pair of hits in his first inning. After getting the first batter to fly out, he allowed a base hit and a sacrifice bunt to put a UVA baserunner on second.

With the power-hitting Matt Thaiss coming up, BC head coach Mike Gambino opted to intentionally walk Thaiss and then brought in lefty Kevin Connor to face UVA’s cleanup hitter, Pavin Smith. Connor has served primarily as a lefty specialist, getting both Thaiss and Smith out on Friday, but prior to that had rough outings in pressure situations against Connecticut and Pittsburgh.

The pressure was even higher on Sunday, but Gambino opted to play the lefty-lefty matchup instead of sticking it out with Nicklas, or going to a more proven bullpen option like Bobby Skogsbergh, who was available and warming.

“Matt Theiss is one of the most dangerous hitters in the country,” Gambino said. “[Connor] had gotten Smith out two days ago and we liked the matchup of what we had with [Connor] against Smith better than Nicklas against Theiss with first base open.”

Connor’s first pitch was a hanging fastball, and Smith sent it sailing over the right-field fence, giving UVA a comfortable 4-1 lead heading into the bottom of the 10th.

But BC got going right away. Joe Cronin and Braren knocked back-to-back base hits, Stephen Sauter struck out, and then Nick Sciortino was hit by a pitch to load the bases. After Gian Martellini fouled out in his pinch hit at bat, it was left to Michael Strem, who was dropped to seventh in the order after going hitless in the first two games of the series.

Down to BC’s final out, Strem delivered.

He sent a line-drive double down the left field line to clear the bases, with Gabriel Hernandez, who had pinch run for Sciortino, just sliding ahead of the throw at home. All in all, Strem went 3-6 with a run and those three RBIs, a day befitting the slugger more than his 0-3 days Friday and Saturday.

“I was more on the attack today, more on the hanging curveballs and fastballs,” Strem said. “I found some holes.”

Strem’s and Adams’ doubles, BC’s biggest hits of the game, both came against the bullpen of UVA, which had not seen much action until Sunday. After getting a complete-game, one-hitter from Connor Jones on Friday and eight innings of two-run ball from Adam Haseley Saturday, Virginia turned to Alec Bettinger, a reliever making his first start of the season. He was sharp in his first four innings, which had been about the goal for him entering the game, but with a healthy pitch count he was brought back for the fifth. It was then that Strem singled, Adams laid down a sacrifice bunt, and Logan Hoggarth drove in the Eagles’ first run.

Bettinger departed after that inning, leaving BC to work on a bullpen that isn’t as sharp as its rotation—only David Rosenberger pitched a perfect inning.

“We couldn’t get to the bullpen Friday or Saturday night, so cracking into the pen was big,” Strem said. “We got it going at the end, finally.”

On the other side, besides the one mistake by Connor, BC’s pitching was top-notch. King delivered a characteristically strong performance, going seven innings and allowing just one run. He was narrowly bailed out from potential trouble in the sixth inning, when UVA began with a double and a walk.

After a muffed pickoff play by Sciortino allowed the runner to advance to third, Smith hit a fly ball to right field a deep enough distance that should have plated a run. Casey, the right fielder, fired a strike to home, where Sciortino placed down the tag just as the runner slid in. It was a close call that might have gone the other way with video replay, but it was nevertheless a fantastic outfield assist.

Casey’s next time at the plate, however, he sent a double down the left field line. As he went into second, he dove forward for his slide too late, barreling into the second baseman and injuring his hand. He’d remain in the game for a couple innings before he was replaced by Braren, the eventual hero of the game.

Though Sunday’s highlight came long after King had finished for the day, his performance, along with the solid outings from Jacob Stevens and newly-returned starter Justin Dunn, are perhaps the key takeaways from the weekend. After watching Jesse Adams struggle to make quality starts on Saturday, pitching coach Jim Foster had the idea to switch things up, something that Gambino said he was hesitant about at first. Yet after the three great outings from the starters, along with Adams hurling 3 1/3 scoreless innings in relief—not to mention picking up both wins in the series—he’s convinced.