Boston College rowing traveled to West Windsor Township, N.J., to compete in the Knecht Cup this weekend. Every single boat medaled in the final rounds on Sunday, leading to a program-best finish, according to head coach Steve Fiske.

“At the beginning of the year, the team set a goal for all boats to medal at Knecht, and it was great to see them achieve this,” he told BCEagles.com.

The Eagles earned two first-place, one second-place, and three third-place finishes on the day. BC earned each medal in Grand Final races.

The varsity eight boat earned the silver medal for BC. It edged out Wisconsin, Miami, Massachusetts, and Boston University in the race. The Eagles crossed the finish line less than three seconds after gold medalist Tulsa.

The second varsity four boat earned a bronze medal after trailing only Kansas and Bucknell. Though Kansas finished more than 10 seconds before second-place Bucknell, the Eagles finished close to the Bison, losing by less than three seconds. The other bronze medals were secured by the second and third varsity eight boats. The second varsity eight trailed only Massachusetts and Kansas, while the third boat finished behind Bucknell and Kansas.

The Eagles will look to carry their success at the Knecht Cup into upcoming competitions, including a regatta next weekend against the University of Rhode Island and Boston University.

bc rowing kansas bucknell
Dancing Eags: Class Council Brings Dance Marathon to BC
Reflecting on a Year of Covering BC Men’s Hockey 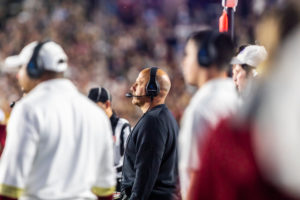