Home » How the BC Women’s Center Creates a Safe Space for All
Featured Story, Features

Think of the newly renovated Boston College Women’s Center as a mix between your local public library and your grandma’s living room—comfy couches, colorful pillows, filled bookshelves, an unfinished jigsaw puzzle on the table. On the walls hang framed inspirational quotes and pictures of faces smiling at the brochures and pamphlets attached to the glass wall across from them. It’s hard to believe, then, that the Women’s Center was born in a bathroom.

BC had made the transition to become a co-educational University in 1970, but this change was not without its ensuing difficulties. Three years after the change, female BC students still felt uncomfortable on the male-dominated campus and wanted to create a safe space for women.

The students took over the women’s bathroom on the landing outside what is now Eagle’s Nest and declared the opening of the BC Women’s Center. Its first guest? Then-president of BC, Rev. Donald Monan, S.J. Of course, no one told him the center was a bathroom. The students had made the most of their humble abode, attaching a room number to the door, printing brochures and pamphlets, and providing other materials that they felt important for women to have.

Monan took the hint, moved the students out of the bathroom, and quickly searched for a permanent place for the new Women’s Center. Perhaps in homage to the original location of the Center in an unassuming bathroom, the Center had always been located in McElroy Commons—until this past summer, when it was relocated to the fourth floor of Maloney Hall.

DiBella primarily works with students who have experienced sexual or intimate partner violence, helping students by walking them through the psychological trauma associated with such experiences. Various resources offered by the Women’s Center, such as SANet, the hotline of the Sexual Assault Network, and a sexual assault support group, essentially provide students with a support system on their healing journies. Programs like CARE Week are meant to raise awareness of these important issues on campus.

Katie Dalton, director of the Women’s Center, regards women’s issues as not only what pushed her to pursue higher education, but also as something she dedicated her life to. Dalton worked at Brandeis University for four years before coming to BC to pursue her academics in women and gender studies. Dalton’s first exposure to women’s issues was as a graduate peer minister living in a Kostka Hall, a freshman, all-female residence hall. She realized through her many conversations with the students as they transitioned to college life that many of the problems female students faced were rooted in their gender. Dalton subsequently spent more time working in the Women’s Center, and it was this experience that catapulted her career in women’s issues. Dalton’s work and strong presence in the Women’s Center have earned her a reputation for being known as the “mayor of BC” by her peers.

“It definitely has been an office on campus that has experienced growth throughout its time here,” DiBella said.

CARE Week seeks to bring to light many of the programs offered by the Women’s Center and give an outlet for student expression regarding sexual health on campus. Bystander Intervention is the Center’s flagship prevention program that educates students on sexual and intimate partner violence. Bystander is involved in almost every event during CARE Week, promoting various events through a social media campaign and having Bystander trainers represented at every event.

“It certainly takes a community-wide approach to encourage everybody to think of themselves as a stakeholder in ending [gender-based and sexual] violence,” DiBella said.

CARE Week kicked off yesterday with members of the BC community participating in the Boston Area Rape Crisis Center (BARCC) Walk for Change, a fundraising event in support of its services. Most of the events of CARE Week are run by students to encourage camaraderie among their peers. Student work will also be on display throughout the week, returning to the Center’s mission of serving the student.

On Wednesday, April 13, the national organization A Long Walk Home will present “Story of a Rape Survivor” on campus. The event is the result of a collaborative effort between various academic departments, campus offices, and student groups and was funded by a grant that Dalton and DiBella received from the Avon Foundation. Presented through various multimedia platforms such as poetry, visual photography, acting, and dancing, “Story of a Rape Survivor” is the true story of one woman’s struggle to reclaim her body, self esteem, and sexuality after having been assaulted in college.

The annual “Take Back the Night” event has always been the most widely attended event, attracting approximately 500 people. To be held this Thursday, April 14, on O’Neill Plaza, the event aims to use its platform to draw a significant portion of the BC community and raise awareness of issues that it would normally not think of.

“The point of the event is to give an opportunity to the survivors to share their stories, which is a really powerful experience for the community to hear and for those survivors to feel that support resonating within the group of people who attend,” DiBella said.

On Friday, April 15, Olivia Hussey,  current vice president of the Undergraduate Government of BC and MCAS ’17, will moderate a panel event called “Where We Stand.” The event was created to answer questions raised in the UGBC’s recent bill about sexual health. The event aims to answer some of the concerns raised regarding BC’s handling of sexual violence as a social, cultural, and institutional problem, and make students feel more comfortable with seeking help on campus.

“What Rachel and I have seen over the years is that it’s really important to students not just to have resources available, but also accessible around campus,” Dalton said. “[We’re] getting student feedback on how we can be better, and this panel will be an opportunity for the students to assert what the community needs.”

The Women’s Center offers a mentorship program to prepare female students for life after BC. Rise pairs female seniors with female faculty and staff members to reflect on the issues facing BC women. The Center created the program in response to studies that suggested that female students’ academic self-perception was lower than that of their male counterparts upon graduation from college.

“I think that at BC it’s difficult to not feel like you have to wear a mask and kind of conform,” DiBella said.

The Women’s Center encourages students to use the open space for work, but hopes that the informal, welcoming atmosphere will make students comfortable enough to express themselves.

“It is a nice change from O’Neill, and this space is also open during finals, where [staff members] sometimes get pizza and try to maintain a level of hospitality,” she said.

The Women’s Center has certainly come far in its over 40-year journey on the Heights. Despite the change, the Center still adheres to its founding principles of eliminating sexual violence from the BC student experience, creating an open and safe space reflective of the BC community, and empowering students by validating their sense of self.

Not bad for a bunch of girls going to the bathroom together. 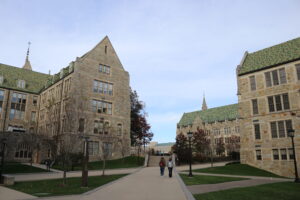