Home » Behind the Mesh: Baldwin the Eagle’s Secret Life 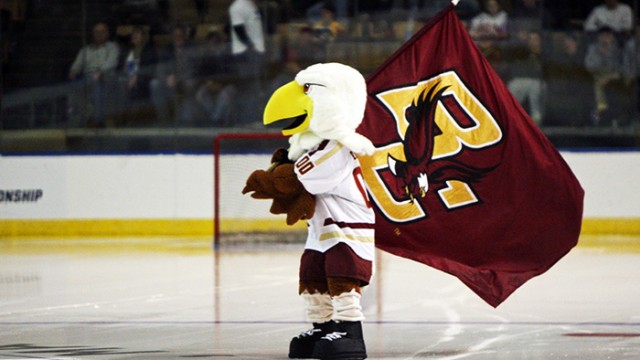 Behind the Mesh: Baldwin the Eagle’s Secret Life

Think back to the last interaction you had with Baldwin—whether it was a stumbling hug, a lame handshake, or even as far as a well-orchestrated picture. Unless you’re actually convinced by the costume, it may have occurred to you that someone, a real-life person, is actually inside that thing.

For those of us who know we aren’t actually interacting with a human-sized, ambulatory, freak-of-nature bird, it begs the question—who really is Baldwin?

As it turns out, if you have a friend or classmate who is full of Boston College spirit, is constantly working on his or her dance moves, and disappears mysteriously for hours on end on game days, you have reason to be suspect that you might know a Baldwin.

To this end, BC’s beloved Baldwin the Eagle is just as much a superhero as he is a champion for school spirit. Behind the dancing, felt-and-mesh exterior of this dancing Eagle, the identity of Baldwin is shrouded in secrecy—it is the BC athletic department’s best-kept secret.

The general population knows shockingly little about the human “behind the mesh” who brings the dance moves and high-fives to life for BC’s countless sporting events. These students, the Clark Kents and Bruce Waynes of the school- spirit world, walk among us with no fanfare, their appearances signaling little about their second identities.

So naturally, when it came time to arrange a meeting with the unmasked Baldwin, secrecy was paramount. With some finagling and a promise to maintain anonymity, The Heights-Baldwin summits were safely executed. Under the cover of darkness, in undisclosed locations, and over untraceable phone calls, I was given the full rundown on the secret life of Baldwin—the person sweating behind the beak.

“They said, ‘you’re Baldwin, you have to dance big,’” explained one Baldwin of the unique tryout process. “The whole thing is you have to go big, it’s really go big or go home.”

According to our sources, dancing big is only a fraction of the tryout process—an enormous amount of weight is put on the “Baldwin Strut,” with which so many Superfans are unknowingly familiar. Simply put, it’s a walk of confidence.

“You’ve got to know how to walk like you’re the biggest man on campus,” explained our Baldwin informant, exhibiting the same nonchalance that her feathered alter ego does so often.

The grueling tryout then takes a predictable turn—dance. Though no prior dance experience is necessary, a level of stamina and a willingness to throw down Baldwin-style certainly are requisite. In the words of our interviewee, “you just dance—for like 45 minutes.”

“If you get it, you get an email that’s like, ‘We regret to inform you … that your identity is changed,’” recalled one grinning Baldwin of her acceptance email. “It’s a pretty cool email to get.”

From what was explained of the position, these words couldn’t be truer. This notion of fully assuming a second identity is no understatement, and for the right person, it’s liberating. In fact, that new secret identity/superhero guise is an attractive part of the job for many.

“Honestly that’s the most fun part for me,” one Baldwin commented with regards to her anonymity. “It’s like you have a secret life.”

In addition, “the suit,” as it’s called, is a perfect vehicle for channeling energy toward school spirit. Resoundingly, the best part of donning the suit is making a wholehearted effort toward getting crowds excited and maintaining an animated atmosphere.

“It’s a totally different mindset when you’re in the suit,” one Baldwin said. “When BC is doing well, you feel great, and it’s so fun to dance and to get people excited.

In the interest of aesthetics, however, the suit itself affords (somewhat predictably) very little physical comfort. In fact, the suit is over two inches thick in areas due to Baldwin’s striking musculature, which makes for balmy conditions when the sun is shining during early-season football games.

The position is also not without its quirks from a fan-interaction standpoint, and one can be sure that any Baldwin has his or her share of ludicrous fan stories, which range widely from receiving beatings doled out by packs of middle-schoolers to being handed newborn infants for photographs.

Despite the odd mugging or strange photo-op, however, the fan reception is truly central to the experience as Baldwin. Between being a vehicle for the crowd’s energy and a physical representation of the school’s spirit, dressing as Baldwin offers a strange perspective on athletics and fans in general. As it turns out, people shout strange things at individuals dressed up as dancing birds.

“It’s really fun to dance and to get people excited, but at times you’re laughing at what other people are doing,” Baldwin said with a laugh. “You’re like, ‘Oh my god what is this person doing, they have no idea that I’m actually a person in here.’”

In such a quirky position, anything can—and will—happen. Though too many to count, mascot experiences covered in these summits were as diverse as they are unique, ranging from frequently high-fiving Jerry York, to taking part in a 196- person-wide NCAA mascot GroupMe, to even joining Brad Paisley onstage at the CMAs (true story).

At the end of the day, however, it takes a certain type of person to really pull off a perfect Baldwin—the Baldwin that we see day in and day out.

“You can feel the energy of the crowd, and you can feel when you bring energy to the crowd, which is really cool,” said one Baldwin, who recently completed a return trip from the Frozen Four in Tampa, Fla.

In fact, of the five Baldwins currently on staff, the two The Heights managed to get ahold of were both coming off of trips alongside BC sports teams—one, as mentioned, from Tampa and the other fresh off of a promotional trip to Ireland in preparation for the game in the Emerald Isle next year.

As the interview ended and my interviewees slipped back into their civilian lives, it occurred to me just how well-kept of a secret the Baldwin name is. When they’re not traveling internationally or parading around Alumni Stadium triumphantly, they’re seated among us with little indication (other than some subtle Under Armour gear) of their alter egos.