Home » Own It Summit Format Could Be Adopted For Other Groups 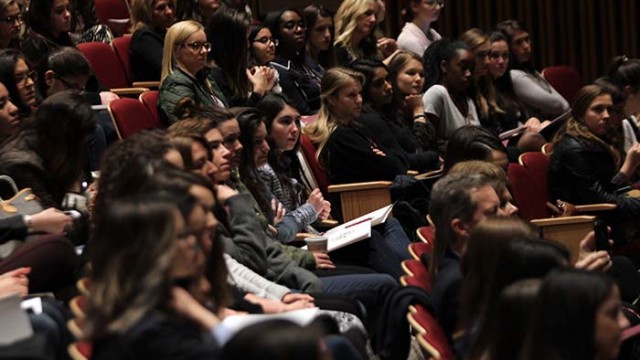 Own It Summit Format Could Be Adopted For Other Groups

Last year, Boston College had its first Own It Boston College Summit. This year, the summit, sponsored by the Office of Student Involvement, the Women’s Center, Women In Business, Lean In, the Undergraduate Government of BC, the BC Career Center, and Females Incorporating Sisterhood Through Step, was held on April 9. These sponsoring groups have once again put on one of the most successful events of the year at BC.

Participation in this year’s summit tripled, exemplifying Own It’s success. Increased student interest should help expand the summit in the future and allow these groups to continue bringing in good speakers and preparing worthwhile events. The success of this year’s event is visible in a number of parts of the summit. As mentioned in an earlier Heights editorial, the keynote speaker Sophia Amoruso provides an interesting perspective for the summit and is a well-known figure sure to draw student interest. The other speakers were also interesting and diverse in background. This prevents a uniformity of message and story that would have hindered the goals of the summit. By bringing in multiple, vastly diverse speakers, the summit avoids simply bringing in many conventionally successful female CEOs and other corporate women.

Beyond this, the summit also included a personalization factor. Before participating in the summit, students filled out a survey that was then used to personalize workshops and events that would be most relevant for those students. This increases the benefit of attending the summit, as students are able to focus on things they care about and are already engaged with in some way. By continuing to develop and improve upon last year’s summit, Own It has managed to bring more people to its events.

This summit should also serve as an example for other campus groups. Just as the Women’s Center and other groups managed to put together this summit to promote successful women, other campus groups can create similar events. Diversity and LGBTQ groups would do well to note the way Own It has found success on campus and attempt to create similarly structured and publicized events that can draw student interest and engage students in their specific cause. This formula and format has proven successful with this year’s summit and its tripled participation rates. Applying it to these other student interest groups would help develop increasingly worthwhile BC events and promote these groups’ goals.

women’s center own it Own It Summit
Warren Talk Demonstrates Need for More Event Publicity
LTE: A Response to “BC Faculty Donated Exclusively to Democratic Campaigns in 2014-15”