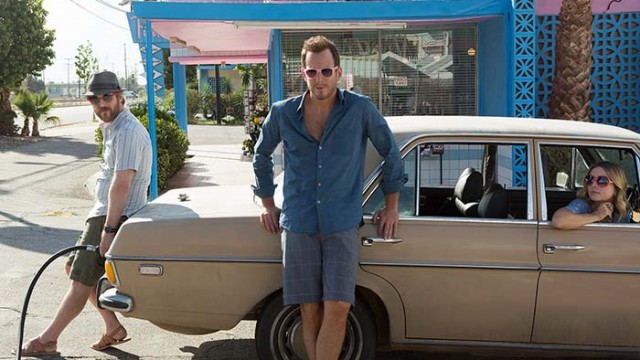 In just one of the many attempts to bring profundity and meaning to his new Netflix series Flaked, Will Arnett’s character Chip searches for the perfect cliche-coated line. Finally, he settles on a trite piece of stock dialogue dull enough to emphasize exactly how stale the show’s premise is.

“The only thing I can do is just try to be a better person,” Will Arnett’s conflicted character Chip explains thoughtfully, his voice saturated with feigned sincerity as he tries to replace regrets of the past with optimism for the future. Viewers of Arnett’s new series can relate to the recovering alcoholic character’s conflicting sentiments of disappointment and hope—for those who have seen the new comedy-meets-drama-meets-romance disaster regret having wasted time watching and are optimistic that the show won’t be picked up for another season.

Unfortunately for the Canadian-born comedian, season one of his new Netflix series just doesn’t have one iota of the wow factor he hoped it would. Set in scenic Venice, Calif., the show centers on a narcissistic and hypocritical life guru—a self-help extraordinaire who, though he would never admit it, could use a whole lot of help himself. When he’s not preaching grand narratives of soul-cleansing sobriety to his friends and presenting himself as the poster boy for recovery, Chip takes a hefty swig from a bottle of wine when no one’s looking.

Hiding under a safety blanket of complex lies and denial is the troubled Chip, somehow still admired by his friends and mentees despite his only “advice” being cliche quotes one might find ironed onto a cheap throw pillow. He avoids responsibilities, opting instead to hone his skills as a suave womanizer. Chip undermines his friendships in order to benefit himself—a character element meant to make the protagonist intriguing, but instead renders him utterly unlikeable.

Armed with his trusty bicycle, the nauseating over-confidence of a guy who knows he’s kind of good-looking, and more inspirational quotes than can be found on a teenage girl’s Tumblr page, Chip sets out into the world alongside his odd posse of misguided pals—the hopeless romantic Dennis and an aspiring stand-up comedian named Cooler. It would be incorrect to claim that the crew finds itself in a slew of all the hijinks and shenanigans expected from a drama comedy series, for the characters do very little except frequently fight with each other over women and personality flaws they find unbearable.

Perhaps the dull plotline could be salvaged if the actors’ performances were engaging. The chemistry between the show’s supposed best friends is lacking, and the delivery of almost every line is disappointingly dry. Unenthused, hollow, and unconvincing, the characters stroll lazily through town, all the while sporting a permanent expression of disinterest and apathy.

Together the eight 30-minute episodes are astoundingly uneventful, for it seems as though producers Mark Chappell and Arnett made a concerted effort to create the dullest TV show on record. Chip’s life seems to consist only of butting unwantedly into the personal problems of others and swooping in to steal his best friend’s love interests. With a wayward plotline that leaps from failed romantic ventures to friend troubles and back again, the show has no momentum thanks to a plotline as uninteresting as the dusty furniture company Chip owns and operates. “Oh, it’s just you,” Chip says with a laugh to a close friend in the second episode. “I thought we actually had a customer coming in this time.”

After the initial announcement of Arnett’s new comedy in 2015, viewers thought they actually had a refreshing dram-com to binge watch. Without much substance or impassioned performances, Flaked is a disappointing step back for the Arrested Development alum. Disguised as a nuanced comedy about overcoming the complications of addiction with the added flare of the characters’ alternative and trendy lifestyles, the Netflix original series is nothing but a poorly executed and awkward attempt at a comedy-drama blend.

“Chip’s a complicated guy,” Dennis says to the protagonist’s often-neglected girlfriend. While the statement may be true of the conflicted man troubled by his demons, the one aspect of Flaked that isn’t complicated is discovering just how pointless the new Netflix series really is.