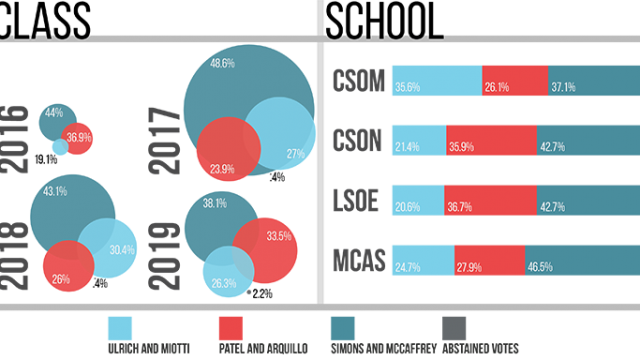 This year, 2,592 students turned out to vote in the general election for Undergraduate Government of Boston College president and executive vice president, which is 28 percent of the total student body. Two hundred ninety-eight seniors, 932 juniors, 684 sophomores, and 678 freshmen voted for the presidential candidates.

Following the elections for the 2016-17 UGBC president and executive vice president, the Elections Committee has released data on voter turnout and demographics.

Last year, 3,411 students voted in the general election, over 800 more students than this year. The voter turnout for the 2015-16 election was roughly 40 percent.

Rachel Mills, co-chair of the Elections Committee and MCAS ’16, attributes this year’s lack of turnout to the primary elections. Holding primary elections usually has a negative impact on voter turnout during the final elections, Mills said.

“I think all of us who were campaigning wish [the elections season] was a little bit shorter.”

The Elections Committee did not hold primaries for the UGBC presidential elections last year. The Committee made the change after six teams joined the race when the nomination deadline was extended in March.

“I think all of us who were campaigning wish [the elections season] was a little bit shorter,” Simons said in March.

Simons and McCaffrey won the most votes in each of the four schools. They received 442 more votes overall than the second-place team of Ulrich and Miotti.

Ulrich and Miotti came last in every school except for the Carroll School of Management, in which they came in second and received 218 votes.

This year’s election began with three teams, two of which dropped out due to personal reasons. The Committee decided to reopen the nominations for president and executive vice president to create more competition within the race. Six new teams then joined, and a primary was held to narrow the field to three final teams.

Simons and McCaffrey will begin their work as president and executive vice president at the end of this academic year and carry into the summer. The duo hopes to focus on three goals: quality, inclusivity, and accessibility. They also plan to look at day-to-day improvements for student life.

“We’re very happy with the percentage of the vote we received, and we believe in our mission of ‘Strength in Unity,’” McCaffrey said in an email. “The information we have coming out of this election gives us a good idea of where we need to start to connect with the student body next year.”

UGBC elections demographics
At ‘Own It’ Summit, Female Voices From the Top
What’s Next for ‘Ranchony,’ the Satirical Presidential Candidates? Not UGBC.