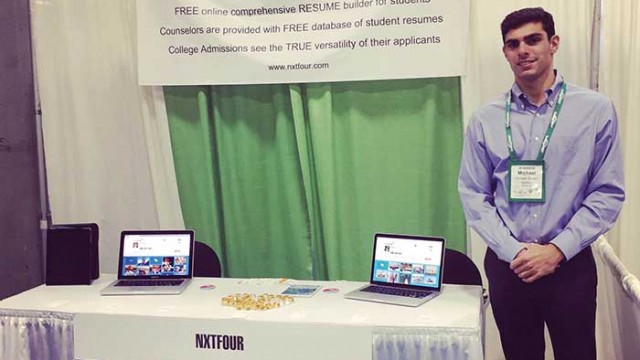 The admissions process for American colleges and universities is notorious for being an anxiety-producing web of deadlines, essays, and grades. Michael Bryant, CSOM ’15 and founder of the startup Nxtfour, which aims to ease the college application process for rising high school seniors, is no stranger to this process and the stress it brings. And he hopes to make it easier.

Nxtfiyr us an online network for high school students. The organization enables students to actively upload grades, their test scores, and arrange their activities, as well as add artwork and highlight tapes. Students can network with their peers and share their high school experiences with colleges. After the student uploads all of his or her work, Nxtfour creates an automated resume for the student and a QR code that links directly to the resume.

“Back when I was a senior in highschool, I was under a lot of stress, and application deadlines were quickly approaching,” Bryant said. “I still had tons of questions.”

The idea came from Bryant’s own college application process, who said that he was struck by how the Common Application lacked the same social aspect that is present in Facebook and LinkedIn. The social aspect of this company and the online resume are what set Nxtfour apart from other organizations also seeking to make changes in the world of college admissions. Through this company, Michael seeks to connect students with other students and professionals, and to show professionals a more individualized view of high school students.

Bryant was not the only person to see a gap in how to best serve our high school seniors who plan on attending college. Vicki Abeles has captured the negative side effects of this process in her documentary Race to Nowhere. Released in 2009, the documentary has been used to start a conversation about creating a healthy balance between the academic and personal lives of students.

Abeles’s call for action has been heard by other organizations around the country. The New York Times has written on a report called “Turning the Tide,” an account by the Harvard Graduate School of Education that considers the challenges in the college admissions process and recommends specifics methods to change the system. Educators across the country, including presidents and deans of admissions, have contributed to or endorsed the report, and administrators from MIT, Yale, and the University of Michigan were scheduled to be present at the news conference when the report was revealed.

Recently, the Coalition for Access, Affordability, and Success was founded to aid in the college admissions process as well. The Coalition, whose members include schools like Amherst, Harvard, and Tufts,  was founded to improve the college process for all students as they seek their perfect college by giving students of all backgrounds access to tools to plan their futures.

Although the idea came from applying to college, it was truly put into action while Bryant was in college. Bryant, who studied finance and marketing in CSOM and who was on the swim team for three years, first pitched the idea of Nxtfour in the fall of 2013 to Boston College’s Elevator Pitch Competition and won first place with a prize of $500. Bryant then pitched the idea to the BC Venture Competition in the spring of 2014 and also took home first place, with a prize of $20,000. While at BC, Bryant pitched the idea with two other BC students and two Harvard students.

“For most kids [entrepreneurship] is a pipe dream, but at BC it can become a reality,” Bryant said. “I definitely wouldn’t be doing entrepreneurship if it weren’t for Boston College.”

He lauded the amazing teachers, faculty, staff, and alumni connections that BC makes available for students seeking to become entrepreneurs.

“Kids have the opportunity to win $20,000 for a business idea—it’s a pretty sweet deal.”

This support continued beyond BC’s physical campus as well. During the summer, Bryant then participated in the Soaring Startup Circle, a summer accelerator program created by BC alumni to help students develop their startup ideas. The alumni were incredibly supportive of Bryant, and they served as mentors and advisors for Nxtfour. Bryant was able to meet and discuss ideas with people from many startups, including NBD Nanotechnologies and Jebbit.

“We got to talk to these founders and learn from their mistakes and successes,” Bryant said. “The alumni were eager to see us succeed.”

With such a timely idea, the company has received a very positive response. The company started off with one high school in North Carolina, and has now spread to other schools in the district. Bryant will be traveling to North Carolina soon to discuss how students are using Nxtfour and opportunities for expansion.

To help with expansion, Bryant now works with Shihua Wu, a current high school senior at Boston Latin who will be attending BC as a management major in CSOM in the fall. Wu heard of Nxtfour through a friend, and was brought on board to help bring the product to high school students and connect Boston organizations to the company.

“It’s a small team, though, so everyone does everything,” Wu said. But, finding a balance between working at Nxtfour and being a high school student can be difficult.

“Sometimes I just have to stay up late and be motivated to do more.”

Although Wu has not officially become an Eagle yet, he is excited. When asked what he’s looking forward to most, he joked that he can’t wait for the parties.

But more seriously, he’s looking forward to being around the entrepreneurial scene and innovative people next year. Wu is also excited to come to the birthplace of Nxtfour and continue to build the company.  Wu plans to pursue entrepreneurship in the future, as it is something he thinks that can change lives, and the world. With such an attitude and with a motivated co-worker in Bryant, the next four years hold a lot of promise for the company.