Home » See it, Get it: How Wymsee Crafted a New Product for the Film Industry 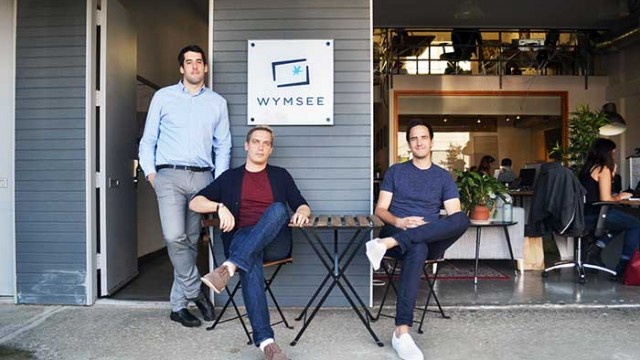 See it, Get it: How Wymsee Crafted a New Product for the Film Industry

For Alexander LoVerde, BC ’11, it just took a whim for him to leave his corporate job in New York City and chase the uncertain future of the startup life.

He never could have imagined that he would one day leave his current position and create SynconSet, one of the most widely used cataloguing softwares in the film industry in, through Wymsee, the company he and his co-founders formed. He and his co-founders decided to start the company because they wanted to work for themselves, and avoid the predestination of the next 30 years.

“We became disenfranchised with the prospect of spending all of our careers climbing a pretty well-defined ladder,” LoVerde said.

During his time at Boston College, while studying psychology, he was involved with the startup culture on campus, at one point taking part in the BC Venture Competition (BCVC). Coming from the liberal arts side of BC, he felt isolated from the business side of things, even joking that the only reason he took part in the competition was the flyer he saw in the Quad advertising the $10,000 grand prize and thinking of the different ways he could use that money.

“I remember very clearly the information session that I attended about it and that the organizer had brought along with him a fellow by the name of Bill Clerico, [BC ’07], the founder of WePay,” he said. “To me it was the most inspirational moment, because he was a very humble sort of BC bro who said that if he could build such a company that we could all do it too … it would not be easy but it would be definitely within our reach.”

And with the competition, LoVerde got his first taste of what the venture world would be like. He began having constant hypothetical conversations with his friend and co-founder Jeff Impey, BC ’11, about what would constitute good product ideas for a new company. Then, out of nothing more than a gathering between friends, the idea came, one that made them both—as well as the other two co-founders Brett Beaulieu-Jones, BC ’11, and Dan Stefanis, BC ’11, quit their jobs and dive head first into their new lives.

One day, while Impey and Stefanis watched the Jason Statham action flick The Mechanic at home, one of them really liked the sunglasses Statham was wearing. Intrigued, he went online and started searching, only to realize that he could not find what brand they were. The two started talking, shocked that an online database for products in movies and television shows did not exist. From this—their whim, and the fact that they saw it— they developed the name “Wymsee.”

From there, LoVerde said they really started talking about really going for it and it’s large consumer application. However, they needed to find a way to keep a digital record of every single thing used in film productions, but did not have access to this information.

In order to gain access to it, they got in touch with a friend of Impey’s sister who worked in costume design in New York. During a meeting, they discovered that all of the records of all of the different articles of clothing, props, sets, and locations were kept by hand in a large 3-ring binder. They saw an opportunity to improve upon that paper-based system that would take long hours to compile.

LoVerde said that they realized two things: first, they should create a tool that would help digitize and organize all of this information, and second, that if they developed a new software tool that could collect all of this information easily, then they could then create an improved experience for those tasked with cataloguing within the film industry.

“What is interesting is that we started with the thought process that we wanted to create a consumer product, only to realize that we stumbled upon an exciting business-to-business tool that really needed to exist,” he said.

The decision was made then to pursue this idea full force, setting aside the initial consumer-side product, which could then be revisited in the future, and focus on creating world-class software for the film industry, according to LoVerde. But one thing stood in their way: not all of them knew how to code. At this time they asked Beaulieu-Jones to join their team, whom they met through working at Deloitte.

“It all moved so fast, from getting the idea in January 2012, meeting with people and creating a business plan, we started to quit our jobs in April,” LoVerde said.

From the time that LoVerde left his job in New York and returned to Boston where the other founders lived, he lived in his apartment and slept on an air mattress over the summer. They all then bought coding books, since it was going to be a technology company and they all wanted to be as knowledgeable as possible about the inner workings of the system.

The group had the most contacts and possible investor networks in Boston. It all took a turn for the better when they got accepted into Techstars Boston 2012, an accelerator program where companies are able to quickly develop connections and have access to investors. They received office space, mentorship, and an equity investment for 3 months.

Fast-forward four years and the company now has two offices, one in Boston and one in Los Angeles, where they conduct most of their sales. A typical day for LoVerde begins when he walks from his home to the office at 3767 Overland Avenue in L.A. There he sits at his desk for a while, answers emails, and makes calls. Then, he spends time with the team and discusses product development and the engineering behind it, discusses marketing strategies, checks in on how the company is doing, often conducts interviews for possible candidates, speaks with potential customers such as Universal Studios, and tries to find the time to eat some food or drink some coffee. Impey agrees, saying that each new day brings brand-new experiences .

Looking back through all of the time that has elapsed, with SyncnSet having been used in over 2,500 productions and in 50 percent of productions in the U.S. mid-season television schedule, LoVerde remembers most that information session for BCVC, and getting inspired to be one of those that make it.

“If you want to start your own company and create your own business, make sure that whatever problem you set out to solve is something that you love,” LoVerde said. “Make sure that you will pursue it no matter what the financial outcome of that is … it’s very doable, it’s hard, but it’s doable.”