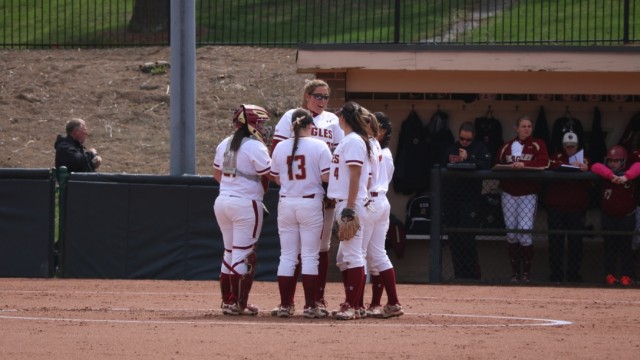 Boston College softball’s Megan Cooley has been named a top-10 finalist for the NCAA’s Senior CLASS Award. The honor, which stands for Celebrating Loyalty and Achievement for Staying in School, focuses on the athlete’s contributions both on and off the field.

The CLASS Award originally had 30 players on the ballot, but was narrowed down to 10 by media contributors across the country.

Cooley was picked as a result of her role as a captain for the Eagles, as well as her excellent play. She currently holds four records at BC, with 84 career stolen bases and hits in a single season with 63 for 2014. She also holds two records for 2013, with 44 runs scored in a single season and 31 stolen bases.

In addition to showing off her athletic skills on the field, she also represents academic excellence with her double major in economics and political science, receiving awards such as the Athletic Director’s Award for Academic Achievement every year in her career at BC.

Cooley has contributed greatly to BC’s 20-15-0 season, with a batting average of .263 and a fielding percentage of .976. She has notched 17 runs this season, fourth behind a three-way tie between teammates with 18 runs.

Votes can be cast once a day, every day until May 9. The winner will be announced during the Women’s College World Series in June.