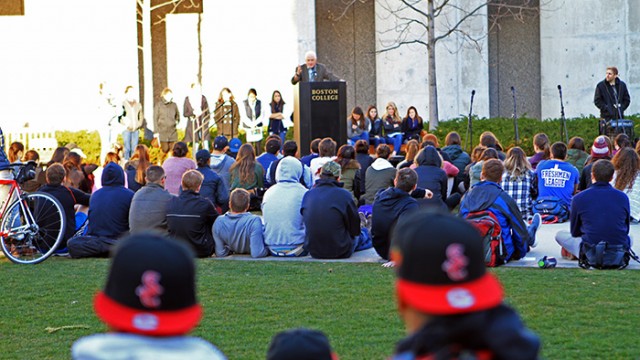 At ‘Take Back the Night,’ Students Reclaim Sexual Assault Experiences

Anticipation filled the air as students gathered in O’Neill Plaza for Boston College’s annual “Take Back the Night” event. The buzzing atmosphere grew silent as Rachel DiBella, the assistant director at the Women’s Resource Center, took the podium.

DiBella introduced the event, saying it aimed to raise awareness with the goal of ending intimate partner violence.

Take Back the Night is a national movement that raises awareness about sexual assault and is the centerpiece of BC’s Concerned About Rape Education (CARE) Week.

Grace Na, the student coordinator for Take Back the Night and MCAS ’16, said, that at a community like BC it can be easy to become complacent toward the college culture of objectification and sexual entitlement. Events like Take Back the Night remind the BC community how complacency only perpetuates unhealthy cultural norms that normalize rape, she said, encouraging students to join together in support to make campus a safe space.

Na emphasized the night’s importance in setting the tone for how we give and receive stories. She explained how the event opens a dialogue in the BC community about how students can support one another in the most supportive way. Take Back the Night and its brave speakers, she said, demonstrate the different ways we can support each other and hold each other accountable.

“There is a unique way each person heals. We can still be there for one another.”

—Grace Na, student coordinator for Take Back the Night and MCAS ’16

The first speaker was theology professor John McDargh, who gave the faculty address. McDargh spoke about issues of power and privilege in society and in the BC community. He encouraged students to speak their truths and have the courage to break the “societal scripts” that prevent them from stepping out of their comfort zones and truly being there for one another.

He concluded by once again encouraging others to share their stories to create a more supportive community that fosters healing and loving.

The first speaker addressed the struggle many survivors of sexual assault face.

“Accepting the story [that normalized rape culture promotes] is easier than accepting reality,” she said.

The second speaker shared her struggles, her triumph over them, and her ability to find meaning in the worst of situations.

The night concluded with a solidarity walk in which the audience joined together to demonstrate its commitment to sexual assault awareness and prevention, and its support of sexual assault survivors.

This part of Take Back the Night, Na said, allows members of the BC community to “reclaim a time or physical space where that triggers bad memories.” The walk provided the audience with a moment to celebrate the survival and courage of tonight’s speakers.

“There is a unique way each person heals,” Na said. “We can still be there for one another.”

sexual assault take back the night care week
BC Economic Association Presents at the Massachusetts State House
Who’s the BC-est of Them All? This Year, it’s Junior Elio Oliva.