Home » BC Swept By One of Nation’s Best Teams 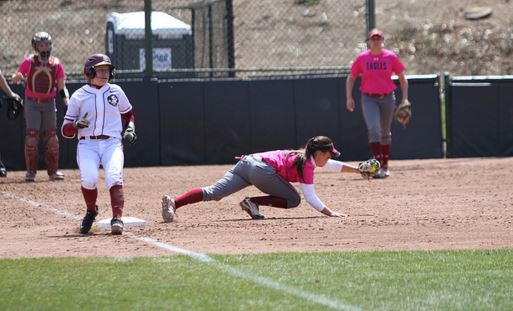 BC Swept By One of Nation’s Best Teams

It all started with a pair of bunts.

After three innings, Boston College softball led 5-3. To start the fourth inning, Florida State played small ball, generating two hits off bunts that were placed perfectly between the pitcher and catcher. Up to that point, four of Florida State’s six hits were bunts. These hits sparked a long rally that was completed by Jessica Warren, who scorched a two-run home run to give the Seminoles a 7-5 lead. Florida State never looked back.

Florida State went on to win Sunday’s game 9-6 in an exciting combination of small ball and opportune extra base hits. The Eagles (21-18, 4-8 Atlantic Coast) gave No. 10 Florida State (34-4, 13-1) a strong finale but were ultimately swept.

Both offenses manufactured runs in the first inning. In the top of the inning, Florida State began the game with two beautiful bunts. Morgan Klaevemann laid down the first bunt and then stole second base. Ellie Cooper moved her to third base with her own bunt for a hit. With runners on first and third, Alex Powers roped a line drive to right field, but it was caught by Loren DiEmmanuele. While the sacrifice fly drove in one run, the runner on first base was frozen by the line drive. DiEmmanuele quickly fired the ball to first base before the runner could retreat to complete a double play. The Seminoles, however, were not done yet. With runners on second and third after a pair of walks and a wild pitch, Zoe Casas beat out an infield single to score the second run of the inning.

The Eagles were faced with a two-run deficit against one of the best teams in the country, and the team hadn’t even had the chance to bat yet. While the situation was intimidating, the Eagles were not fazed. After a pair of singles by Chloe Sharabba and Annie Murphy, Tatiana Cortez blasted an RBI double off of the right-field wall to cut the deficit to one. Jordan Chimento followed Cortez’s blast with a sacrifice bunt to tie the game.

Like the Seminoles, the Eagles put together an impressive two-out rally in the opening inning. With two outs and a runner on third, Carly Severini smashed a ground ball between the shortstop and third baseman, giving the Eagles a 3-2 lead. After Megan Cooley dropped a base hit in front of the left fielder, the Eagles took a play out of Florida State’s first inning playbook and played some small ball. DiEmmanuele sent a bunt toward the pitcher and chaos ensued. King overthrew the first baseman, allowing two runs to score. Florida State attempted to eliminate the second run, but the throw went by the catcher and allowed DiEmmanuele to advance to third.

The second inning was much cleaner, as both pitchers quickly retired the side in order. In the third inning, Casas sent home another run for the Seminoles, hitting a deep fly ball to right field and making the score 5-3. Despite King’s flawless second inning, head coach Lonni Alameda decided to send Jessica Burroughs into the game in the bottom of the third inning. Alameda obviously did not like King’s first inning, and although BC did not get on base in the second inning, all three batters made solid contact. Burroughs, on the other hand, made the Eagles look like an entirely different offense. She completed the final five innings while only surrendering two hits and one earned run.

The Eagles struggled with bunt defense early on, and it cost them in the first and fourth innings.

“It’s unacceptable,” head coach Ashley Obrest said after the game. “It’s something we work on almost every single day and [something] we’ve gone over in meetings and scouting reports. Yes, they were good bunters, but that’s still not an excuse for us to just give free bases away.”

After the perfectly placed bunts, Frei loaded the bases by hitting Cooper with a pitch. Powers sent a full count pitch to left field, driving in two runs to tie the game. Warren’s first home run ended Frei’s outing after barely staying to the right of the left-field foul pole. In the sixth inning, Warren blasted her second two-run home run of the game, giving the Seminoles two valuable insurance runs.

“I think she’s one of the best hitters in the ACC, hands down,” Obrest said about Warren. “We had a plan, and we talked about it in between innings before she gets up. She adjusted. One of them she stepped across the box and hit an outside pitch. A hitter than can do that … that’s pretty remarkable.”

The Eagles scratched out one more run in the seventh inning after Murphy hit a sacrifice fly, but BC ultimately lost 9-6.

Unlike Sunday’s game, the second game of Saturday’s doubleheader was a pitcher’s duel between Frei and King. Frei allowed only two runs off of three hits in seven innings, but King’s complete game shutout was even better. Frei’s only blemish of the game came in the first inning, as Powers hit a two-run home run to right center. BC’s only real chance to score came in the seventh inning, as two consecutive singles and an error loaded the bases with two outs. Taylor Coroneos could not bring the runners home, however, as a fielder’s choice to the second baseman ended the game.

The first game of Saturday’s doubleheader was the worst game for the Eagles. Dreswick received the loss despite the fact that only two of her six allowed runs were earned, while Burroughs received the win after five strong innings. The Seminoles set the tone early, scoring four runs in the second inning. Murphy tried to get BC back into the game, hitting a solo home run in the fourth inning, but it was not enough. After Cooper hit a two-run home run in the fourth inning, Severini scored one run off of a hit to right field in the fifth inning to make the score 6-2. Florida State added a few more insurance runs in the sixth inning, finishing the game with a final score of 10-2.

The Eagles knew that this was going to be a difficult series against a great team, and while it did not turn out as the team would have liked, BC gave Florida State two tough games. Florida State’s combination of small ball and timely home runs, however, proved to be too much to handle. As Obrest suggested, expect the Eagles to work on bunt defense in practice even more now. Sound fundamentals can be the difference between good and great teams, and it proved to be the difference in Sunday’s game.