SafeHer is a rideshare company in Boston that will be launching a female-only service nationwide. This means that every driver will be a woman and only females, transgender women, and males under the age of 13 will be accepted as passengers. The exclusive service was created in response to reports of assaults and other incidents perpetrated by male rideshare drivers against female passengers. With this in mind, this new company provides a useful service for the moment, and brings further attention to an important issue, but is not a sustainable solution to the problem of assault by ridesharing drivers.

Ridesharing services such as Uber and Lyft are widely used at Boston College, and the dangers they sometimes present are very applicable to the student body. Providing women with a separate service is an immediate way to mitigate these dangers for the moment. It does not, in actuality, completely remove the potential danger. While less common, female aggressors still exist and a gender-separated ridesharing service would not entirely ensure safety. Some of these aggressors could even potentially take advantage of the heightened sense of security.

SafeHer still plays an important role in furthering attempts to reform the rideshare system. By providing an entirely separate service marketed around the faults of the more mainstream ridesharing companies, SafeHer presents a challenge to its competitors while also shedding more light on the issue at hand.

While these aspects are clearly positive, they are not permanent solutions to the problem.

Creating a separate space for women does not mean that the ridesharing system does not still need to be reformed. Women should not have to seek out a niche service in order to avoid the possibility of assault. The system itself should be reformed. Background checks should be expanded and rideshare drivers should be thoroughly vetted in order to prevent these crimes. Recent legislation in Massachusetts has already enforced criminal background checks and state certification for Uber and Lyft drivers. This is one step toward the ultimate goal of complete safety in ridesharing services. Further safety measures should be put into place to lower the possibility of danger.

SafeHer should serve as a wake-up call to Uber and Lyft. Female customers can now seek a separate, safer service as an alternative. From a purely practical perspective, this should demonstrate the importance of protecting female passengers from assault by drivers. When business is lost due to the dangers of the service, it is clear that action must be taken. Beyond that, the continued controversy surrounding these services is enhanced by the introduction of this alternative, putting more pressure on the mainstream services.

SafeHer remains only a short-term solution to the problem, as it is a relatively small attempt to deal with a flawed system. Women should be able to use the exact same services as men without concern. This will only be possible when an overall reform of the rideshare system takes place. 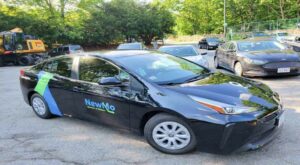