Home » ‘Hardcore Henry’ Is a First-Person Shot in the Dark 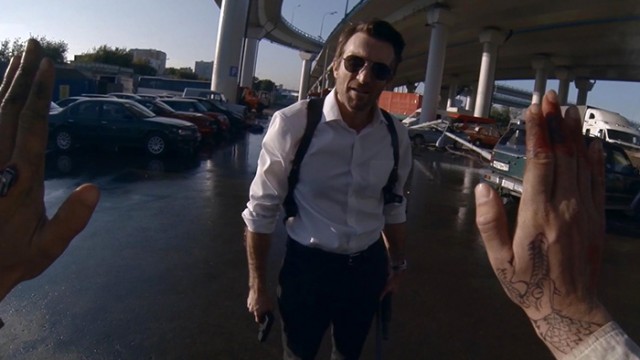 ‘Hardcore Henry’ Is a First-Person Shot in the Dark

Hardcore Henry seems to suggest that just because you can does not always mean you should. In this first-person action flick, the story is as thin as the layer of gore dripping from every window, upholstery, and surface in the film. The action, for all its grandiosity, is not enough to make up for the lack of narrative, cracking the skulls of viewers over and over with little to no tact. Harecore Henry does not pull punches, but will ultimately leave viewers feeling numb, like the protagonist Henry, to all its flashiness, gun fire, and girls.

Following Henry from the first-person perspective, the film takes us for an action-packed ride as Henry (Sergey Valyaev, Andrei Dementiev, and Ilya Naishuller) awakes from an induced sleep in a water chamber. Emerging from the chamber with no memory of who he is or how he got here, Henry is greeted by his wife Estelle (Haley Bennett). After a brief reunion, the two begin their escape, only to be stopped by Akan (Danila Kozlovsky) a crazed telekinetic warlord. A brief skirmish results in Estelle’s capture, leading Henry to find out who he is as he fights to bring his wife back to safety.

There are few fully developed characters in the film. Henry is not so much a person as an empty shell. The extent of his and the cast’s characterization goes as far as the kind of exposition given in Super Mario Bros. or other simple, classic video games. “Save me!” the princess says. The evil villain laughs as he whisks her away. The only character of merit is Sharlto Copley as Jimmy, a scientist and friend to Henry. His performance is actually quite dynamic as he adopts different looks, accents, and mannerisms throughout the film. His character holds together his scenes and is a major driving force of the paper-thin narrative, second only to bullets.

The film, even by its title, makes it known that the plot will be driven by a spray of gunfire and explosions at the heels of the protagonists. Hardcore Henry pulls heavily from the kind of first-person shooter romps seen in video games, and while this is an interesting filming technique, it should not be the sole basis of a cinematic experience. When playing video games, the silent protagonist leaves room to substitute his or her lack of personality for our own. Players are inextricably linked to the game through gameplay, but the same notion is not achieved through the relative passivity of moviewatching. Henry is silent for the purposes of the film, but his lack of personality and the lack of purposeful direction in the film make for a hollow viewing experience.

The gore, violence, and explicitness of the film are actually some of the most refreshing parts of the experience. Getting up close and personal with stabbings, gunshots, and decapitations in the first-person is very different and unique in that respect, though in many cases the film seems to slip on its own mess, as the onslaught of violence makes for some long, drawn-out, and otherwise uninteresting action sequences. As Henry dismantles, disarms, and disembowels his foes without fail, his already-flimsy character set-up distances itself from anything grounded in reality.

Unfortunately, in many cases, viewers will have trouble following exactly what is going on in any given action sequence.Though the technical aspects of filming in first person are commendable, it, at times does not lend itself well to the comprehension of viewers.  As Henry grapples, runs, and parkours about, it may become difficult to discern actual direction and orientation. Though these confusing instances might be purposefully added to create tension and unease within the viewer, their inclusion is nonetheless questionable. In a film marketed as action-packed and hardcore, most of the action is best left readily visible to viewers.

Additionally, cuts between takes are visible in many tracking shots. As Henry chases down adversaries, these cuts can be seen, jumping him slightly farther up steps or down the street. Though these might also be purposeful additions to cut down on the tedium of travel, but they diminish the fluidity of the first-person perspective and remain obvious to viewers with attentive eyes.

It seems that first-person film could at some point become a major cinematic style. Though, it would be smart of films to incorporate it in such a way that would fit a theater setting and work within the confines of a film narrative. Video games are video games, and films are films. If the new genre cannot adapt, it may be best to leave a note attached to its corpse, like so many of Henry’s mangled foes, reading “Do not resuscitate.”