The Rhythm of Love: See Your Heartbeat at Chestnut Hill’s Newest Exhibit

There are many times during the day when one can feel his or her heartbeat, like after a run or a sudden rush of adrenaline—but, unless they are heart surgeons, is not likely they have actually seen the rhythmic blood-pumping routine with their own eyes, until now. The Heart of the City, a new interactive sculpture created by the internationally recognized Brazilian artist Anaisa Franco, allows passersby to see the incandescent figure light up to match the flow of blood inside their bodies.

Located in The Street in Chestnut Hill, the interactive display will be on sight until April 25, mesmerizing anyone who happens to catch a glimpse, especially at night when the light show emanating from the piece showcases it in its fullest state.

The sculpture—which weighs 400 pounds and measures 8 feet by 6 feet by 3.4 feet—is modeled to resemble the silhouette of the human heart. To sync with the installation, all a visitor has to do is sit on one of the three seats in the exhibit and place his or her finger in the sensor. The heart will then begin to “beat,” with its neon lights flashing to the unique tempo of the visitor’s heart.

The object is surrounded during the day by curious onlookers who are not exactly sure what they are dealing with, until they walk up to it and place their fingers in the sensor. The silent melody of the piece is reciprocated by the individual’s feeling of his or her own beating heart, creating an almost transcendent, out-of-body experience.

For creator Anaisa Franco, the journey leading to Boston began many years ago, when she was just a child. She began doing ceramic sculptures when she was only five years old, eventually going on to study visual arts in the Fundacao Armando Alvares Penteado (FAAP) in her native Brazil.

“I then became interested in animation technology and in virtual reality,” she said.

After entering several amateur technology art competitions, Franco began travelling the world. She participated in several art residencies for a decade, all while building a project in each of the countries that she visited, 22 total, including Australia, where the Heart originally debuted.

The origin of that sculpture was a prototype she developed in 2014 called Heart Dialogue, one of her first experiences dealing with a user interface that allowed for customized experiences for each individual interacting with the piece.

“I had this idea to connect the human heart with an object,” she said. “I downloaded a 3D heart and printed it … I was thinking that people would put their finger[s] on it and the object would light on and off according to their heartbeat[s], that was the original idea for it.”

This small object was an inspiration for Franco, who then started assembling a team to create a larger version of the prototype, where multiple people could experience in a large exhibit what she had been able to produce with the small object.

The Heart of the City in its completed form was selected for the Light Festival in Sydney, Australia, where it was well received by critics. She was able to use the lab in the city to develop the full-scale version of the heart. Franco then submitted the project to the city of Boston, where it was commissioned for an exhibit this year.

“We fell in love with Anaisa Franco’s vision for Heart of the City: to enlarge the heartbeat of its viewers by connecting visitors and creating an expansion of their own hearts,” said Allison Yee, general manager of The Street, in a press release. “As our fourth installation at the property, public art has been a fabulous way for us to brighten peoples’ days and delight them with an entirely unexpected experience. We cannot wait to see people light up as they encounter this sculpture.” 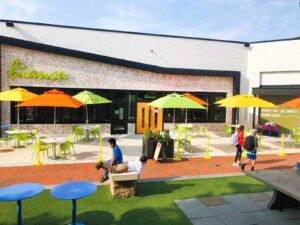