Home » Lush is “Out of Control,” Parquet Courts Gives a “Human Performance,” and More in Singles this Week
Arts, Music

Lush is “Out of Control,” Parquet Courts Gives a “Human Performance,” and More in Singles this Week

“Human Performance” tries to remember mistakes of the past that still creep up in the present. It’s a beautiful guitar ode to the moment when something stops working because of operator error. We hurt the people we love because we’re human, it seems to say.

Car Seat Headrest,  “Fill in the Blank” from Teens of Denial

Before being featured in the soundtrack of the recent Netflix original Flaked, Car Seat Headrest used to be known only among a small group of longtime listeners. “Fill In The Blank” drowns out the band’s lyrical doubt about its future with a wash of fuzzy guitar and tight melodies.

Lush, “Out of Control” from Blind Spot

Lush was one of the first bands to be dubbed with the label “shoegaze,” a genre of alternative rock made popular in the ’80s, characterized by introspective themes and laid-back ambiance. Almost 20 years after disassembling, Lush returns, capturing the essence of shoegazing with “Out of Control, which is off the band’s upcoming EP, Blind Spot. 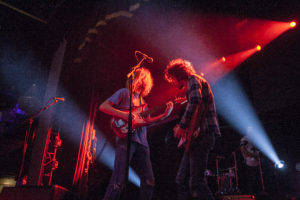