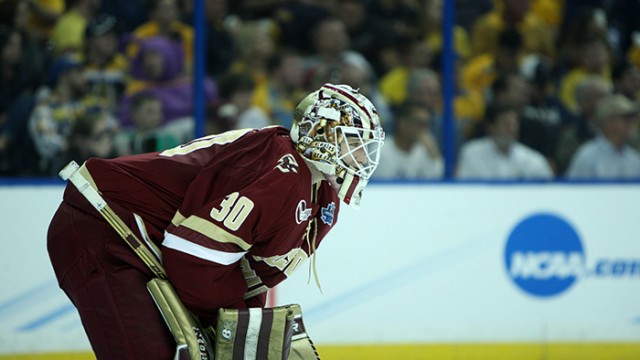 Perhaps the most crushing blow to a devastating offseason has finally come down for Boston College men’s hockey.

Multiple reports have indicated that Thatcher Demko has decided to leave early and sign with the Vancouver Canucks, the team that drafted him with the 36th overall pick of the 2014 NHL Draft. Team insider BC Hockey Blog was the first to report it, which was later confirmed by TSN’s Bob McKenzie.

On Wednesday afternoon, the Vancouver Canucks’ official Twitter account announced the signing of the goaltender to a three-year entry-level contract. Demko is the 12th Eagle to leave BC early in the past five seasons, the most in college hockey over that span.

A three-year starter for the Eagles, Demko is arguably the greatest goaltender in program history. He will leave Chestnut Hill with a career record of 62-26-10, a .928 save percentage, 13 shutouts, and a goals against average of 2.08. He will finish seventh in BC career wins—albeit in only three seasons—second in goals against average (Matti Kaltiainen, 2.04), and tied for second with Scott Clemmensen in shutouts (Cory Schneider, 15). Under Demko, the Eagles won two Beanpots, two Hockey East regular-season titles, and reached two Frozen Fours.

After being nominated for the Hobey Baker Award in 2014, the San Diego, Calif. native elected to have double-hip labrum surgery. His decision turned out to be the best thing possible for the team. Demko turned in one of the best ever seasons for a college goaltender, with a 27-8-4 record, .935 save percentage, 1.88 goals against average, all while playing 2,361:48 minutes. He was seventh in goals against average, fourth in save percentage, third in wins, second in minutes, and first in shutouts, with 10. Among BC single-season records, Demko’s 10 shutouts are a new program record. In addition, his 1,067 saves are fourth all-time at BC (Schneider twice and John Muse) as well as his goals against average (Kaltiainen twice and Parker Milner). His stellar season earned him the first-ever Mike Richter Award for a BC goaltender in addition to being a Hobey Hat Trick honoree.

Canucks general manager Jim Benning visited Demko in Tampa, Fla. during the Richter and Hobey Baker ceremonies to try to convince the goaltender to leave. He reportedly turned down the offer, preferring to take a couple of weeks with his mother and father to discuss the decision.

In his place, the Eagles will have three goaltenders worthy of the starting spot. Joseph Woll, an incoming freshman from the United States National Team Development Program, is the likely favorite to take the starting spot. The Saint Louis, Mo. native is the current starting goaltender for the U.S. in the IIHF World U18 National Championships.

Sophomores Ian Milosz and Chris Birdsall may also contend for the starting spot. Milosz, a first-semester freshman, replaced Demko in two games this season. The 6-foot-7 netminder performed admirably against then-No. 3 Providence in a 7-3 win for BC and a 4-4 comeback tie on the road. Birdsall was a highly-touted prospect from the USHL’s Youngstown Phantoms, which also produced Austin Cangelosi and incoming defensemen Connor Moore and Luke McInnis—however, he has been sidelined the entire season after experiencing concussion-like symptoms. 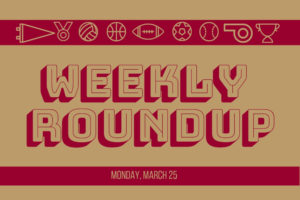 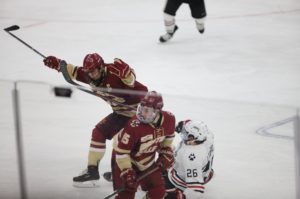