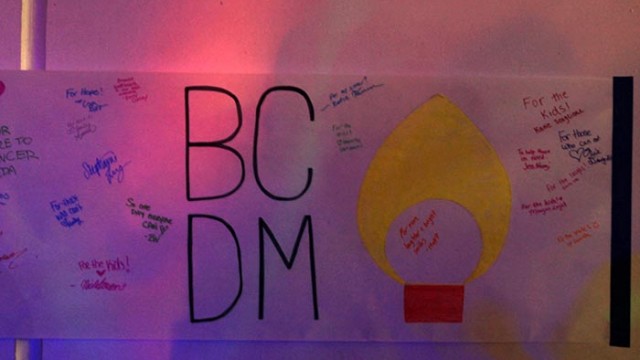 The first Boston College Dance Marathon in over 10 years, sponsored by the Sophomore Class Council, was held this past Friday and Saturday. It consisted of 12 hours of dancing and performances by various BC dance groups such as Full Swing and Phaymus, as well as other activities including visits by local pediatric cancer patients. In total, the event raised $17,000 for the Boston Children’s Hospital. Roughly 200 students participated in the marathon, which was held in the Flynn Recreation Complex.

Since the event was the first dance marathon in many years, this relatively low turnout is understandable and should not discourage the continuation of this event in future years. This year should serve as the launch for future events, and students should continue to both promote and attend these events. The money goes toward a good cause, and the event effectively promotes awareness of pediatric illness. Dance marathons have found great success on other college campuses, but many of these other colleges are larger state schools such as Pennsylvania State and the University of Florida. These schools have different cultures than BC as well as much larger student bodies. The same methods used at these schools will most likely not generate the same levels of success at BC. Because of this, the event should be adjusted to bring in a greater number of students in the future.

One way to do this is by looking at past events that have achieved great success. These events normally involve a high-level administrative group or something that involves a great portion of the student body, such as Showdown. Partnering with multiple groups would allow the Sophomore Class Council to attract more students. One of the reasons Showdown has achieved such success in the past is due to the wide range of groups involved and the connections many students have to at least one of these groups.

This year’s dance marathon involved partnership with a number of dance groups, as well as cooperation with local businesses. In the future these same efforts can be expanded to on-campus administrative and high-profile groups. Those planning the Dance Marathon in the future should look to partner with a powerful group on campus that can provide other outlets for promotion as well as other incentives for students to attend. This could include athletics, whose support could help generate interest in the event. At Northwestern University, for example, students have hosted a dance marathon for the past 42 years. In that time, the university has raised over $16 million. This kind of success could be replicated at BC, with time and a creative look at high-powered resources.

Showdown, which was held on Saturday, April 13, presents another issue in relation to the Dance Marathon. Two dance-related charity events within one week of each other could easily have caused apathy toward the second event. Because of the shared features of each event, this could present another possible partnership for the Dance Marathon. Partnering with Showdown, or another powerful event, would allow for advertising and promotion through multiple outlets, generating increased interest. By bringing together these various groups, the Dance Marathon would most likely be able to attract more students. This possibility should be seriously considered in order to increase turnout for the Dance Marathon and raise more money for the Children’s Hospital in the future.

dance marathon student council showdown
BCEMS Performed Admirably at This Year’s Marathon
LTE: A Response to “The End of Democracy”