Andres Pastrana Arango, the president of Colombia from 1998 to 2002, spoke at Boston College Saturday about the four components of successful leadership: conviction, courage, confidence, and communication.

He wanted, he said, to show the audience how Colombia has been dealing with terrorist groups within Colombia from his side, the side of the government. He also emphasized how global problems impact his country.

Today, oil, gas, and other commodities are cheap, just as they are across the world. But there are also many problems that exist specifically in Colombia.

Over the past few years Colombia has worked to create a strong middle class, decreasing the percentage of Colombians living in extreme poverty.

“We have a real, real challenge in going back and bringing these numbers up,” he said. “We need to grow 6 or 7 percent if we want to change those numbers.”

He ran for president in 1994 after serving as a senator but lost the election. He ran again in 1998, however, and won at 42 years old, making him the youngest president of Colombia.

The are several parts to being a good leader, he said: what he calls the “four C’s.”

“The first one is conviction—the leader has to be convinced on what he wants to do,” he said.

He pointed to the drug problem. They had to change the strategy in how to deal with the drug problem when he came into office. Colombia is the largest producer of cocaine, he said. In 1998, it planted 180,000 acres of coca.

Looking at these figures, he said he was convinced to change the strategic efforts in combatting the drug issue. He also knew that he needed to talk to Europe and to the U.S. about the drug problem.

He came to the U.S. first to convince President Bill Clinton that the U.S. and Colombia needed to work together on the issue because Americans were the largest consumers of cocaine.

The plan gave Colombia bombs, helicopters, and other equipment to combat the Revolutionary Armed Forces of Colombia (RAFC), which was at the time the largest terrorist group in the world. They successfully strengthened the army, he said. Colombian forces numbered 10,000 in the beginning, and today they have over 110,000 soldiers—the largest army in the region.

The U.S. gives Colombia $750 million a year, which he credits with helping to change the country.

Next, he aimed to strengthen Colombia’s justice system. Arango knew that if the government wanted to end the drug issue, it needed to give the peasants and farmers a different way to make a living.

For guidance, the president looked at other nations that had dealt with similar issues. They found that Malaysia also had drug problems and that they had turned people off of the drug industry by establishing a palm oil industry.

The Colombian government then decided to begin growing palm oil. When the president first began there were only 120,000 acres of it, but when he left office, there were almost 500,000 acres.

The palm oil industry has proven to be a successful alternative to the drug industry, Arango said. Now, farmers and peasants are making much more money than they were before and are less involved in the drug cartel.

A good leader also needs courage, he said, to defend his ideas and fight for what he believes in.

In between his two elections for president, Arango knew he needed to make a change in his message. He saw that many people in Colombia wanted the government to work toward establishing peace in the country, so he told the voters that if he were elected president, the first thing he would do was go into the jungles where the leaders of the RAFC were stationed and talk to them.

When he was elected, Arango escaped from his bodyguards to go into the jungle. He explained that during his presidency he had 60 bodyguards with him at all times.

His friend, who was the head of his security, accompanied him on the trip and helped him get away from his bodyguards.

When they landed, the people who met them in the jungle kidnapped the pilot and the co-pilot of the plane. The president was driven into the jungle and delivered to the leaders of RAFC. They all sat around a table, wearing masks and holding guns.

Despite the risks, he knew that the most productive way to address the drug issue was to start conversations with the drug lords.

The third characteristic for a good leader is confidence, he said.

Pablo Escobar, then the biggest leader of the drug cartels in Colombia and one of the wealthiest men in the world, killed 400 people personally and 1,400 indirectly.

Before Arango was president, he was a journalist who supported the government crackdown on the cartel. Since he began work as a journalist in 1982, he had received numerous death threats from Escobar.

“The only thing people feared at the time was extradition to the United States,” he said.

The Colombian government decided to begin punishing cartel members who fought extradition. In response, the cartel began to target, kill, and kidnap politicians.

Arango was kidnapped in 1988 and put in a small jail. It was during this time that he met Escobar.

“If I had stayed there another three or four minutes I don’t know if I would have survived.”

“He said he was going to kill me, and so we had a long conversation—a six-hour conversation,” he said.

During the conversation, he tried to instill confidence in Escobar. When Escobar went to leave, he told the guards to give Arango anything he wanted but that if he tried to escape, they should shoot him.

A week later, the authorities showed up, but Arango thought that his kidnappers would kill him before they were taken by the police. When one of the kidnappers came in, he told the president that he was his “insurance policy” and would not shoot him.

In all of the commotion, Arango was able to escape from the jail. He later learned that the men fled to the Amazon rainforest just after he left.

“If I had stayed there another three or four minutes I don’t know if I would have survived,” he said.

The last essential characteristic of a good leader is communication, he said.

Before social media, getting his message out to the general public was much harder. By traveling to Venezuela and talking with the local people, he said, he was able to learn about the humanitarian crisis for the first time. After discovering the need that existed in the country, he set out to educate others on the crisis.

He attributes the power of communication to the improvements in Venezuela since his visit. He also decided to make a digital presidential library available to the public. The site includes photos of his family, videos, and other personal documents.

He then built a large library with documents and books about history and Colombian politicians.

“All of you are here listening to my stories and that shows a lot about you—the great leaders that you’re going to be in the future,” Arango said. 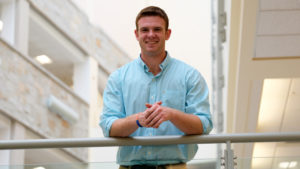