When you are on the road, so many things pass you by. The mindlessness of driving needs to be uplifted by things like the radio, lest the driver go insane. On long road trips out to New Mexico, or up to Northern Maine, I was always amazed by my parents’ ability to know virtually every song that made its way onto the radio. From station to station, they not only knew the songs being played, artist, album, and year, but were able to sing, say, or poetically recount all the words. As a kid, I didn’t think I was capable of housing so much knowledge, but as a I grew and I began to add, song by song, lyrics I knew by heart to my mind. The words meant something, but the more I think about it, the more I wonder if lyrics are important at all.

Some say they are the first thing they notice, finding each word instantly and letting it wash over them. Others say that lyrics come second to the sound and movement of the song, adding embellishment to an instrumental showcase. Much of the time, I agree with the latter sentiment, because often times instruments or non-human sounds capture feelings and emotions that words never could. Words have a distinct meaning. Though over time they may change, they remain, at least in one moment in time, stagnant. Notes, on the other hand, require more context. Chords, harmonies, progressions, and keys all play important roles in shaping a song. A single note needs the context found within the rest of the piece, which can give that note a whole new feel or meaning from song to song. That sensation of goosebumps one gets when hearing a favorite song, is often, for me, brought about through the first couple notes or chords rather than the first verse.

But we are drawn to lyrics still. Words. Something compels us to sing along or at least, in our minds, follow the train of thought in the song. I find that this has to due with our innate need to find something tangible and comprehensible to latch onto. We can understand the meaning of the words in this moment and extrapolate meaning based on definitions and cognitive inference. But I also find another reason, one that speaks to the core of humanity and people.

When we are first born, we cannot see anything more than shadows. We can, however, hear. And the first tangible thing we may latch onto, our introduction in the world is often a sound. A voice. The voice of a doctor or our mother or father is the first sensory experience we get.

When we gravitate to voices, I believe it is because it is one of the first things we do and one of our first experiences. And the sounds are human. There is no guitar or keyboard to function as a medium between the two. It simply is one person’s voice and another’s ability to hear it.

Lyrics, words, and poetry speak to that connection between people that we have been building since we were born. The voice of another person is enticing to listen to. It is not so much what they are saying, so much as the fact that they are saying something. In this way, lyrics interject a concrete, unadulterated human element into music that resonates with our primal inclinations to associate ourselves with the sounds of another person.

I find myself drawn to lyrics more and more now, not because they are saying anything in particular, but because they are saying something. The meaning behind lyrics is a discussion for another time, but I feel their place in songs is solidified and needed in today’s age. As we become more dissociated from other people through various means, having songs that continue to maintain a human element is even more important.

When I drive now, during the summers I find myself with the music. The radio blaring, I find songs everywhere that I can know the lyrics to. Quietly to myself, I may sing along, knowing that, in all likelihood, someone somewhere is doing the same. 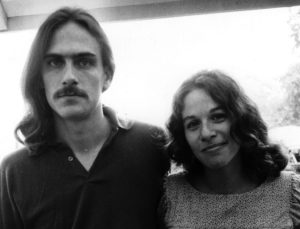 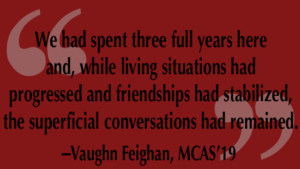