Home » BC Alum to be Honored at Arts Festival
News, On Campus

BC Alum to be Honored at Arts Festival

The Boston College Arts Council will host executive vice president of the Nederlander Organization Nick Scandalios, BC ’87, as this year’s featured guest at the annual Arts Festival. He will be honored with the 2016 Alumni Award for his accomplishments in theatre. Scandalios will be interviewed by Paul Daigneault, also BC ’87, on Thursday about his journey from BC student to acclaimed producer.

The event will take place at 3 p.m. inside of the art tent set up in front of Stokes Hall. This is the first of three events that Scandalios will appear at over the course of the three-day BC Arts Festival, which lasts from Friday, April 28th to Saturday, April 30th, and includes original student musicians, campus dance groups, and an a cappella showcase. There will also be a variety of visual art on display.

On Friday, Scandalios will discuss the business aspects of the theatre industry at the Industry Insider Panel with Sean Flahaven, BC ’95, and Patricia Noonan, BC ’07.
Later that day, Scandalios, as well as current students, will be recognized at the awards ceremony and reception.

According to the BC Arts Council page, Scandalios graduated from the Carroll School of Management, but he was also involved in theatre, starring in West Side Story during his time at BC.

Upon graduation, Scandalios began working as an assistant for veteran entrepreneur and theater owner Jimmy Nederlander. Based in Detroit, the Nederlander Organization is a large international company that owns and operates a number of Broadway theaters and other venues.

The Nederlander Organization is home to musicals like Hamilton, ON YOUR FEET!, and Waitress. Scandalios produced widely popular shows, including The Lion King, Wicked, Rent, Beauty and the Beast, and Hairspray, at Nederlander Theatres.

“Scandalios’ impact in the theatre world extends beyond his position with the Nederlander Organization,” the BC Arts Council’s page said.

Scandalios has used his influential role in the theatre scene as a platform to advocate for some humanitarian causes.

Currently, according to the BC Arts Council page, Scandalios serves as the Immediate Past Chairman of the Board of Governors of the Broadway League, and has previously served on the board of trustees for Broadway Cares/ Equity Fights AIDS.

Modeled after Bravo’s Inside the Actor’s Studio, Inside the BC Studio will feature Daigneault—founder and producing artistic director of SpeakEasy Stage Company—digging into Scandalious’ journey through the arts and more. 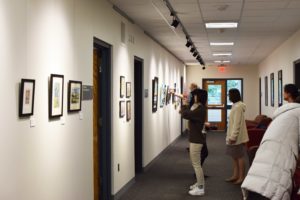