Swim and Dive Coach Concerned About Plans for New Pool, Future of Program

What was expected to be a blessing for Boston College Athletics in a year when little else has gone right may not have as bright of an ending.

In late February, Director of Athletics Brad Bates announced the creation of a $200 million sports complex to replace the Flynn Recreation Center, as well as baseball and softball fields on Brighton Campus and a field house adjacent to Alumni Stadium for teams such as football to use in the winter. Because of specifications to the pool, however, BC varsity swimming and diving head coach Tom Groden feels that his sport may be cut within the next few years.

“I have been told swimming is going to be cut by people who think they know what they’re talking about,” Groden said in an interview Monday morning. “I haven’t been told that by Bates, and he’s probably the only person who could effectively tell me. … Do I believe it? I don’t know. Been asked this question for years.”

Groden, who has coached the Eagles’ swimming and diving team for each of its 46 years of existence, said that the plans presented to him for a new pool are not suitable for competition at the Division-I level, especially in the Atlantic Coast Conference. The Plex’s layout includes an 8-lane, 25-yard pool, with a separate diving well.

Based on the current schematic plan, the new pool will feature an 8-lane, 25-yard pool that is at least 6 feet deep and will be heated at 80 degrees. Adjacent to the racing pool will be a 4-lane, 25-yard pool heated at 86 degrees. Additionally, there will be space for 240 participants on the deck, which, according to Caitriona Taylor, director of campus recreation, is much larger that the current one. The second floor of the new athletic complex will also feature a 200-seat section in which people can view swim meets.

Several new amenities will appear in the athletic center, the inside plans of which have not been made public yet. The center will have the pool on the first floor, as well as two multi-activity courts, which can be used for activities such as indoor soccer and floor hockey, among other sports. There will also be a rock climbing wall, a golf simulator, and a storage and meeting place for club sports, something that those teams have not previously had.

“One of the goals was to increase space and opportunity for club sports and intramurals,” Taylor said.

The ceilings of the pool and multi-activity courts will extend into the second floor. That level features the primary fitness center, which will have a “dramatic increase” in space and equipment. It will also have two multipurpose rooms, a spinning room, and administrative offices.

On the third floor, the athletic center will have three indoor tennis courts—one fewer than the Plex has. While the Plex includes several outdoor tennis courts, these plans do not—however, Deputy Athletic Director Jaime Seguin said there are outdoor courts planned in the Institutional Master Plan, outside of the scope of this athletic center. The third floor also has an Olympic lifting fitness area—something that was heavily requested—a yoga room, another multi-purpose room, and a club sports conference room.

The highlight of the third floor will be a four-court, all-wood basketball gym. Unlike the current courts in the Plex, which are not the regulation sizes, this will be high-school regulation so players can “shoot a real 3-pointer,” as Taylor puts it. She also specifically highlighted how this will help club men’s and women’s basketball. These courts are also lined for volleyball and badminton, and will be the new area for varsity fencing to practice. Taylor said that getting a wood surface for varsity fencing was one of the program’s main requests. In that court area, there will be a 200-plus-seat social gathering area, something the Plex does not have.

Finally, the fourth floor will have a “feature track” that encompasses the whole floor, as well as two racquetball courts, two squash courts, and an evaluation and wellness room for BC’s personal trainers.

Despite these additions, Groden is not content with the pool area.

The four-lane shallow pool is meant as a teaching pool for children, rather than to serve the BC community—the varsity team and general population alike. While it has been approached to Groden as an opportunity to allow more swimmers to practice or as a warm up and warm down area, he says that conditions heated to that temperature are not suitable for that purpose.

Most notably, the new pool complex will not have a separate diving well, and the 1-M diving board will be attached to the deep end of the eight-lane pool. In addition, the new pool cannot accommodate a 3-M dive—a standard event in NCAA swimming and diving—because the current plan’s ceiling is too short, a fact that Groden referred to as “devastating” for his program.

“When [Bates] told me that there wasn’t going to be a 3-meter board, I told him that it’s ridiculous in some version of what it’s going to do to us,” Groden said.

By not having a separate diving well, Groden estimates that the length of time at swim meets will increase by an hour and a half to two hours. That, along with not having suitable practice facilities, will hurt BC on the recruiting trail and dissuade swimmers from wanting to become part of the program, he said,

One of Groden’s biggest concerns is his lack of involvement in the process. He said that, about a year ago, he was initially approached with two plans for a pool in the new facility. Immediately, he replied to Bates with his concerns that the pool would be insufficient for the program, suggesting changes that could help. For months, he had not been contacted further on the matter, he said.

According to Groden, on Dec. 15, 2015, Bates informed him that there would be no 3-M board, and that the plans would be released the following week. In February 2016, days before BC’s announcement, Groden was shown the official plans by Seguin and Taylor. At that point, Groden “was told that no changes would be discussed.” While he has asked for copies of the plan, he has yet to receive one. Groden believes that BC Athletics left the plans “intentionally vague” because they were concerned about backlash.

Seguin stated that NCAA rules do not mandate the 3-M dive as part of competition, and that there are options available to offset that in a competition.

“One of the things to remember is that this building is for multiple constituencies,” Seguin said.
“We’re averaging about 2,500 faculties, students, and staff that use the building on a daily basis. … So with those 2,500, the whole undergraduate population, along with the varsity teams, we had the balance on the building. To be able to do the 3-M board, what’s on the other floors would have to be eliminated. That was one of the compromises.”

Despite Groden’s dissatisfaction, Taylor said he was given the opportunity to express his concerns fairly, and that several surveys and the input of experts was included in these plans.

“Tom had an opportunity to give his input, which was delivered, and there was a lot of groups and a lot of research done,” Taylor said.

Groden said that, while nothing has been official, he has been told by insiders in athletics that the Board of Trustees not only threatens his program but “plans to cut as many as 17 sports,” noting fencing and tennis as two in particular. Bates said these claims were untrue, and that the University is committed to the swimming and diving program.

“We did an analysis of our entire department, and the priority was program preservation,” Bates said. “So the fact that we’re moving forward with a swimming pool that’d be eligible for competition is a sign we’re committed to the program, so that should reaffirm the University’s commitment to swimming and diving.”

Though BC routinely finishes last or next-to-last in the ACC swimming and diving championships, Groden said this is largely because of the program’s inherent disadvantage of not being able to offer scholarships. The men’s side has not had scholarships for over 20 years, while the women’s team had the last of its scholarships moved to women’s hockey in 2012. But Groden does not see a problem with that. BC has the maximum number of athletic scholarships a school can have, according to Groden, and if they have to go to any team, it might as well be women’s hockey.

“They did pretty well with them in terms of them being the top team in the country,” Groden said with a laugh.

BC swimming and diving is the only non-scholarship program among Power Five conferences. Almost every swimming record BC had that was set by a scholarship athlete has been broken by those not on scholarship. Groden specifically highlighted graduating senior captain Dan Kelly, who qualified for NCAA Nationals with a 19:81 in the 50-meter freestyle. BC is coming off of its best season: a 12-1-1 record in which the Eagles defeated longtime rival Boston University for the first time in a decade and the University of Massachusetts Amherst for the first time in 20 years.

Yet if these plans for a new pool are followed through, BC may have difficulty getting those big wins going forward.

“Swimming and diving are the same sport, we score them together,” Kelly said. “And so the analogy I keep going back to is no school would have an 80-yard football field, or no school would tell the baseball team that they can’t bat the last two innings. It’s affecting our scoring, it’s affecting our competitiveness, and I don’t think the administration recognizes that.” 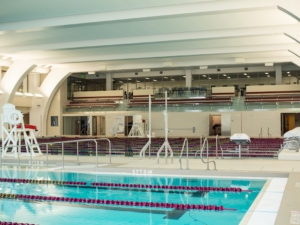 3 COMMENTS ON THIS POST To “Swim and Dive Coach Concerned About Plans for New Pool, Future of Program”