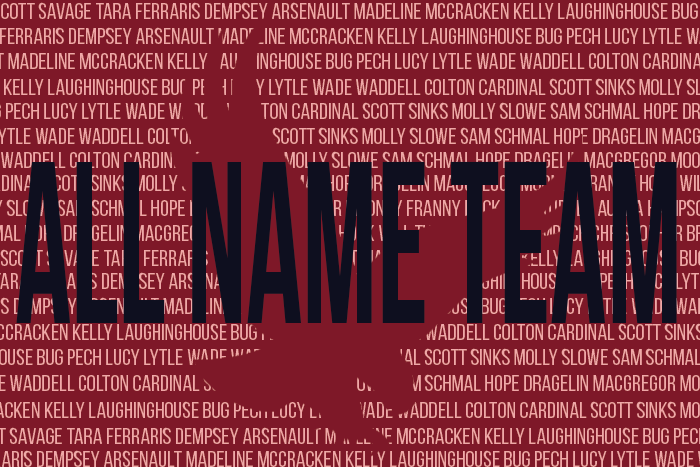 As you’ve probably already noticed, it’s been a slow week in the college sports world. Here in Chestnut Hill, an exciting weekend featuring a no-hitter from Jessica Dreswick and Birdball’s series win over No. 4 Louisville has given way to a sluggish week for Boston College Athletics. The spring season, which includes only five sports, became even more barren when Tuesday’s baseball game against Holy Cross was postponed due to rain.

It’s that time of year when the school takes one big collective yawn right before finals begin, and the sports scene follows suit. Fans have good reason to be tired. We’ve suffered through one of the most frustrating athletic years in BC history. Even our best teams, men’s and women’s hockey, teased us with national title aspirations losing in Frozen Four heartbreakers. However, there is one thing that our student-athletes have that 14 other ACC schools can’t take away from us: some impressive names.

With a lull in the action, I set out on a mission to find the 2015-16 Eagles with the coolest and most memorable names. I didn’t know what I was going to find. I sifted through all 23 varsity rosters—from fencing to women’s track and field—and, naturally, ranked and sorted the most noteworthy names by category. There may not be much in a name, but hopefully it will give BC fans something to smile about during such a sad year for the University’s athletics.

Out of Boston College’s 716 student-athletes, these First Teamers are the cream of the crop. Scott Savage embodies the meaning of savage. The bone-crushing blue-liner slams opposing skaters against the boards for a living, bruising forwards as a member of Jerry York’s elite defense. He’s an enforcer. Watch out.

He’s joined by Tara Ferraris, who should immediately quit sailing and take up racecar driving because, wow, that marketing dream-come-true would take NASCAR by storm. Ferraris also earns bonus points for having a sister, Allison, on her team. Next up is Dempsey Arsenault, one of those unique athlete names that just rolls off the tongue, like a Kobe Bryant or Babe Ruth. Before I die, I want to see women’s soccer head coach Alison Foley summon Madeline McCracken from the bench and sub her into the game by yelling “Release McCracken!!!” And even though Bug Pech may be one of the most unconventional names I’ve ever heard, she’ll have no trouble with the title of her autobiography, Bug’s Life.

Lucy Lytle narrowly missed the cut for the First Team, but here she leads the pack with a name that sounds straight out of a Dr. Seuss story. The best part? She’s only 5-foot-1.

If professional football isn’t in the plans for linebacker Colton Cardinal, he can always fall back on a career in country music. “Tailgating in My Truck” by Colton Cardinal would crack the Billboard Top 100 based on its name alone.

While Molly Slowe isn’t the best name for a speedy forward, it certainly isn’t the worst. But a sailor named Scott Sinks? Really? That’s like a football player being named Johnny Concussions. If I were Mr. Sinks, I’d try to avoid any floating structures and stick to land sports only. As for Sam Schmal, he is anything but shmall. The offensive lineman from Atlanta, Ga. stands at 6-foot-6 and weighs 294 pounds—above-average size even for his position. Probably not the best idea to make fun of his last name.

Most Likely to Be a Character in Harry Potter

I’m just going to say what everyone’s probably thinking: There is no way that Hope Dragelin would be a Muggle. Not with a name like that. Hope probably comes from a long line of Dragelin wizards and witches who have been practicing magic for decades. MacGregor Mooney, on the other hand, strikes me as more of the professor type. Probably teaches a potions course. Franny Hock would most definitely be the Hogwarts librarian, patrolling the shifting staircases with a stack of books and some quaint eyeglasses.

Most Likely to Fight a Pirate

Aye, he may not look like Orlando Bloom’s character of the same name in the Pirates of the Caribbean series, but he may be just as skilled. The Charlotte, N.C. native is rumored to practice with his tennis racket three hours a day so that when he sees a pirate, he can kill it.

Five straight consonants. You can count them yourself. That’s five more than the number of ACC wins BC football and men’s basketball had this season.

Christopher Brown may not shorten his name to mimic pop star Chris Brown, but that doesn’t mean they don’t have anything in common. First of all, they both love ice. Not to mention, Christopher can still “Run It!” as a forward for the men’s hockey team, skating from “Wall to Wall” to try to spark the offense. Okay, I’m done. “Forever.”

Meanwhile, Connor Bacon is a name that’ll make any opposing pitcher hungry—expect the first baseman/outfielder to take advantage of any meaty, juicy pitch over the plate. Lastly, Fallyn Boich is a fitting name for a thrower on the women’s track and field team. “Fallyn” is what a thrown object does in the air, while “Boich” sounds like the noise that object makes when it hits the ground.

scott savage all-name team
Moldovan Cuisine: More Than Words
‘If You Were President, What Animal Would You Make the First Pet?’