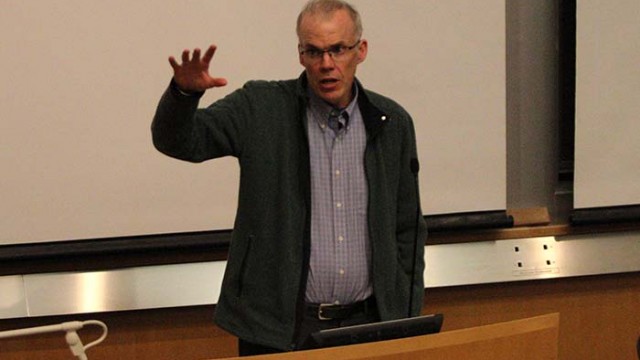 Bill McKibben, an environmentalist, author, and journalist, found himself “mildly depressed” Thursday night in Higgins 300, when he spoke about the global implications of climate change. He had just returned from visiting coastal areas that are the most vulnerable to climate change.

McKibben is the founder and leader of the anti-carbon campaign group 350.org and has written several books about climate change. He was featured in Rolling Stone last November, discussing his campaign against the Keystone XL pipeline. In 2013, he won the Gandhi Peace Award for his work spreading awareness of the negative effects of climate change.

The event was organized by Carolyn Townsend, MCAS ’17, and Haley Shewfelt, MCAS ’18, the director and assistant director of Environment and Sustainability Programming in the Undergraduate Government of Boston College, under the division of the Environmental Caucus.

“Bill’s lecture was an incredibly important call to action for one of the greatest issues of human history,” Townsend said. “I hope that his actions as well as those of the other environmental organizations on campus have inspired the BC community to advocate for change.”

McKibben had just returned from visiting a few low-lying island nations and coral reefs in the South Pacific. These are the areas most vulnerable to climate change, as they are most susceptible to sea-level rise, McKibben said. He witnessed firsthand the desperation of climate refugees along the coast.

As he traveled, he noticed that impoverished people across the world are negatively impacted by climate change.

McKibben detailed the science behind climate change. He said that the melting glaciers will cause unprecedented sea-level rise. Increasingly warm temperatures allow for more water vapor to stay in the atmosphere, causing more frequent and stronger storms.

“We knew things would be bad, but we didn’t know how fast it would play out,” he said. “Change is coming faster and at a much larger scale than we expected.”

McKibben then pointed out how the greediness of the fossil fuel industry has played a large role in environmental degradation.

“We knew things would be bad, but we didn’t know how fast it would play out. Change is coming faster and at a much larger scale than we expected.”

“Fights are always about money and power,” he said.

Exxon and other fossil fuel companies knew about climate change for years but spent millions of dollars to keep it under wraps, according to McKibben. It was more profitable and better for their business models to not publicize scientific findings about carbon emissions in relation to climate change. McKibben said that these companies built their oil empires with the expectation that the environment would change. They specifically constructed their equipment—pipelines, for example—to last through changing climate conditions. He said that he and his organization had to figure out how to stand up to moneyed fossil fuel interests.

McKibben believes alternative forms of energy are becoming more practical with new developments in technology. The price of solar panels has decreased by 80 percent., and more Americans are installing solar panels than mining coal, he said.

“It is now very possible to imagine a world run in democratic forms of power,” he said.

McKibben then emphasized the importance of activism around the world. In his travels, he found young people who were enthusiastic about speaking out about climate change.

“They’re very much your brothers and sisters in this fight,” he said. “I am so happy to hear students are heading to Father Leahy’s house to sleep in.”

“The Pope would be out there with a sleeping bag as well,” he said.

Political change starts with people, according to McKibben. He mentioned Hillary Clinton’s wavering position on the Keystone Pipeline as an example. Just a few years ago, Clinton was a fervent supporter of the pipeline. But as she campaigned for the 2016 presidency and talked to young voters who were unhappy with her position, she changed her position on the issue, and now opposes the pipeline. This shows the power of public opinion, McKibben said.

“There’s nothing radical about what you are doing,” he said. “The radicals work at oil companies.”

Correction: this article has been updated to reflect the fact that the event was organized by the Environmental Caucus.

UGBC CJBC bill mckibben environmentalism
‘If You Were President, What Animal Would You Make the First Pet?’
CJBC Hosts Sleep-Out at Office of the President to Enforce Goal of Education, Divestment