Home » CJBC Hosts Sleep-Out at Office of the President to Enforce Goal of Education, Divestment 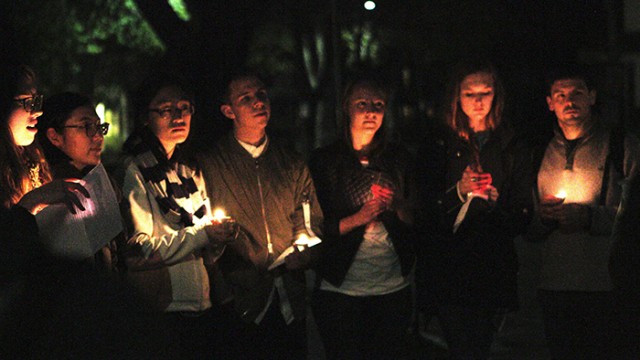 CJBC Hosts Sleep-Out at Office of the President to Enforce Goal of Education, Divestment

After McKibben’s talk ended, CJBC led a procession of about 15 people to Leahy’s office on College Road. The goal of the sleep-out was to educate the BC community about the implications of climate change, including the reality of climate refugees. Ultimately, the group hopes the University will divest from fossil fuels. Last year, CJBC was approved as a registered student organization, after several attempts since 2012.

“We have had very little real interaction with the administration in a productive way,” Elisa Tedeschi, MCAS ’16, said. “We keep trying to raise the question of divestment … and they don’t want to consider it.”

Last year, CJBC delivered a letter to Leahy, asking for BC to divest from fossil fuels. According to CJBC member Delia Ridge Creamer, MCAS ’16, the administration has not acknowledged the group since. The sleep-out, she said, serves to remind the administration that the group is still passionate about the cause.

The sleep-out began with a vigil honoring climate refugees across the world. Participants lit candles and stood in a circle, saying a prayer and singing songs. The group then opened up a discussion, in which people shared their thoughts about McKibben’s talk and Pope Francis’ environmental encyclical Laudato Si.

“Investing in fossil fuels—we have blood on our hands,” Joan Hwang, MCAS ’18, said. “We won’t stop fighting for it because it is what’s right.”

The U.S. just saw its first climate refugees, an indigenous tribe in Louisiana, Hwang said. Due to sea-level rise, the tribe’s members have been displaced from their homes.

“They don’t have a choice in the matter, but we do,” Hwang said. “Tonight we’ve brought our bodies in front of Father Leahy’s doorsteps in solidarity with those in the world who are suffering the consequences of climate change, which we’ve contributed to.”

After the vigil ended, students began to pull out their sleeping bags to stay in front of Leahy’s house for the night.
“I am proud of CJBC for being the voice for divestment on campus,” Hwang said.