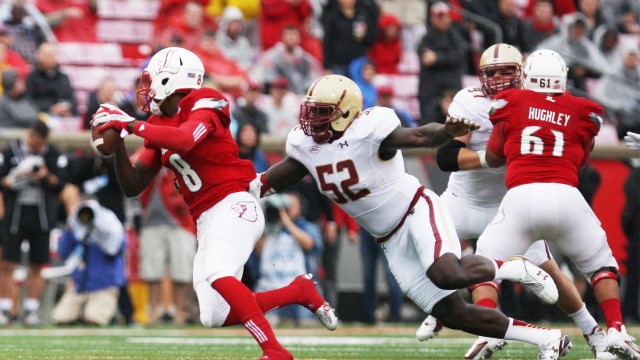 Daniels Drafted by Washington, Wujciak and Abdesmad Sign as UFAs

One day after Justin Simmons was drafted by the defending Super Bowl champion the Denver Broncos, three more members of the nation’s No. 1 defense joined the safety in the NFL. Linebacker Steven Daniels was selected in the seventh round by the Washington Redskins with the 232nd overall pick, while defensive tackle Connor Wujciak and defensive end Mehdi Abdesmad were signed as undrafted free agents by the Philadelphia Eagles and Tennessee Titans, respectively.

Daniels, a three-year starter for head coach Steve Addazio’s squad, earned All-ACC First Team recognition after leading the Eagles with 82 tackles, including 16 for a loss. One of his most impressive performances of the 2015 campaign came against then-No. 5 Clemson in October, when the senior tallied nine tackles, a sack, and an interception return of 18 yards. The Redskins were not expecting Daniels, one of their top-30 invites, to remain on the board in the seventh round, so general manager Scot McLoughan jumped at the opportunity to snag the hard-hitting linebacker.

Wujciak caught the eyes of scouts with his strength and tackling ability last year, registering 12 tackles for a loss and 4.5 sacks on his way to All-ACC honors. Questions surrounded his ability to rush the passer against NFL offensive linemen, but his reputation as a consistent tackler was hard for teams to overlook. He will be joining new head coach Doug Pederson in Philadelphia, where the Eagles are coming off of a 7-9 season that led to Chip Kelly’s firing. The team did not select any other defensive tackles in this year’s draft, but signed DT Destiny Vaeao from Washington State as an undrafted free agent, along with Wujciak and 12 others, on Saturday night.

The Titans signed Mehdi Abdesmad following a senior campaign in which the defensive end recorded 15 tackles and five sacks for Don Brown’s defense. The 6-foot-7 lineman suffered season-ending injuries in 2013 and 2014 but stayed healthy in his final year to garner an All-ACC Honorable Mention. He will face a position battle at the bottom of the depth chart in Tennessee with fellow undrafted signee and defensive end Terrell Lathan from TCU.