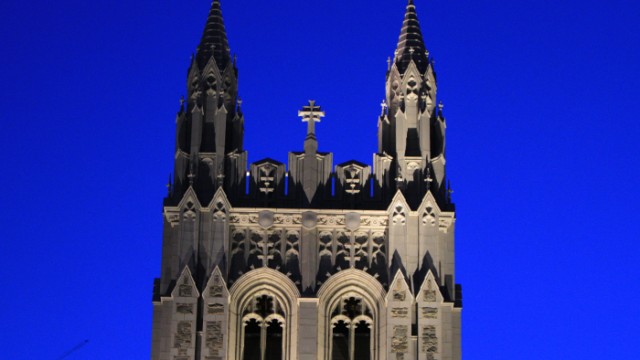 Mike Sacco Works With Underclassmen to Build a BC for All

Mike Sacco suddenly goes from joking around to waving his hands and then quietly bowing his head, instantly getting the attention of the 15 or so students in front of him.

I can tell that he has done this many, many times before. “I would like to start today’s class with the Examenito. It is based on the Examen, which as many of you know is an Ignatian spiritual practice used by men and women to reflect….”

This little spiel is Sacco in a moment — slightly playful, very measured, an embodiment of Boston College’s Ignatian values, but with every word chosen to be entirely inclusive.

Sacco speaks to make sure he is understood. This takes many different forms. He gestures big with his hands, he speaks in metaphors — about ducks and chefs and other things that seem like unusual choices for metaphors; he communicates in the lingo of his students, using words like “humble brag” and “BC Bro;” he calls students by the names their peers give them — it’s not unusual to hear him call someone by their last name in class; his students easily call him “Sacco;” he bolsters his statements with numbers, seamlessly weaving statistics into conversation, not just random, ra-ra BC stats, but data put to use in a very real way, qualified by comparisons to peer institutions or national data. But every one of these methods is to make sure that the maximum number of people are understanding him.

This is no different on a Tuesday afternoon in late March. Sacco sits in front of me in a picturesque office in Rahner House on College Road. Gasson is quite literally glowing in the late-afternoon sunlight through the window over his right shoulder. He’s behind a huge, dark, curved desk, but only because I need to have my phone plugged in so I can record him — I can tell he would prefer that we were just hanging out on one of the two couches in his office. Sacco and I met at the end of my freshman year. We didn’t even meet, really. I just became aware of who he was.

He was giving a presentation to a leadership program I was in — a talk that was pretty impactful for me, though just an average day for him. “I like to joke that I have my clicker and I travel,” he said. Sacco is the director of the Center for Student Formation, an office at BC that, at its most basic level, is a center to give support  to students in their academic, social, and spiritual growth, and to collaborate with other departments throughout the University to assist with designing and implementing new programming.

For Sacco, this means his job takes many forms. There’s the “travelling clicker” piece of his job, speaking at Parents Weekend and to new staff about how to supervise and deal with students, and guest speaking to various student groups.

There’s also the less fun, behind-the-scenes stuff like dealing with IT to make sure that its server is working and that we are designing databases for students to sign up for programs, keeping an eye on the budget, emailing, and going to meetings. And then, there is what he, arguably, is best known for — running or assisting at some of BC’s more popular programs, like Halftime and Freshmen League. He’s also my professor for a once-a-week Cross Currents seminar, Thinking About Gender.

Freshmen League is a program designed for freshmen boys led by junior and senior “Captains.” It helps them get to know other guys outside of their floor, gives them something to do, and gives them access to upperclassmen mentors. It seems like a pretty simple formula, but when Sacco and his colleagues were starting it even they didn’t realize that they were tapping into something pretty significant.

What started out as an engagement initiative quickly turned into helping students recalibrate their masculine construct within the BC community. This sounds very lofty and academic, but when Sacco explains it, it makes a lot of sense.

“Boston College students were highly successful in high school — all of them,” Sacco said. “Men, women, everybody. And they come to BC being very accomplished. This happens at most other colleges. Coming in as a first-year student you lose a lot of power, you lose a lot of influence, you’re not familiar with surroundings.”

Pair this with a contemporary culture that doesn’t give men as much permission to seek help or express weakness as female students, and the result can be some pretty bad decision-making and suffering grades.

“I think it helps our culture because BC students are organizational kids and so far as they are very good at reading the organization, figuring out what the rules are and, for better or for worse, often times they will conform to that set expectation,” he said. “And, at its best, Freshmen League resets the masculine rules at Boston College and it creates spaces for first-year men, and junior and senior captains, to express themselves in authentic, vulnerable ways that, at least in my research and experience, are not as prevalent on this campus.”

Cameron Granger, CSOM ’16, is a two-year Freshmen League captain and is also using Sacco as his senior thesis adviser. Even though he knows Sacco in many capacities, he thinks he gets most excited when he tells people about Freshmen League especially when they have not heard about it before.

Sacco is not the only administrator who deserves credit for a program that now attracts hundreds of students, but he does have a unique relationship with it.

He recently finished his dissertation to get his Ph.D., using Freshmen League as a case study—hence his ease with tossing in theory and statistics while he talks about the program.

If I make this sound academic and critical, I’m not capturing Sacco. Talking to him about students and students about him, there is a two-way flow of gratitude.

“My favorite thing about working with Mike is seeing his work ethic in everything he decides to do,” Granger said. “At first it can be a bit intimidating, but he has a way of inspiring everyone around him to push themselves to do something positive.”

This attitude makes students invite him into their lives — former students often contact him to tell him about getting jobs, getting married, or having kids.

After offhandedly telling me this incredibly touching fact, that, frankly he should consider very high flattery—what better measure is there of an educator who is reaching their students?—Sacco added one more sentence, much quieter than before: “It’s a real privilege, this work, to be invited into a person’s life.” 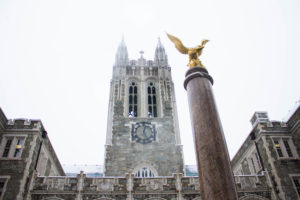