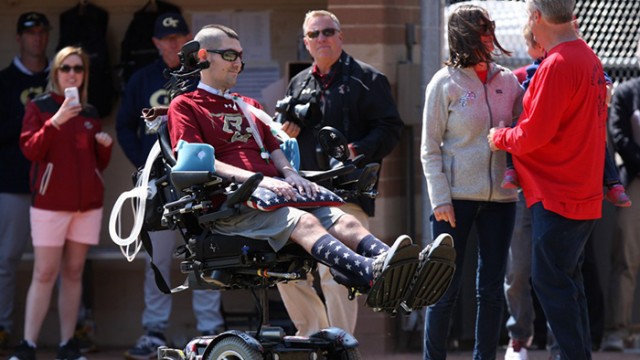 Pete Frates is an undeniably important Boston College alumnus whose story has affected people across the country. After his years playing baseball at BC, he was diagnosed with Amyotrophic lateral sclerosis (ALS) in 2012 and began a fight to raise money for the illness. The Ice Bucket Challenge, which originated with Frates’ efforts, raised over $115 million for ALS research. Videos of people, including many notable celebrities, dumping a bucket of ice water on their heads spread across the Internet and sparked a nationwide awareness of ALS, and raised massive amounts of money. The campaign was extremely successful, and Frates remains a prominent figure in the fight against ALS.

This Saturday, nine years after Frates’ graduation from BC, his jersey will be retired at the annual ALS awareness game to commemorate all that he has done. This will mark the second time that BC baseball has ever retired a jersey.

This is the ideal time for the retirement, as it is the fifth annual ALS Awareness game and the rest of college baseball will be embracing the event. Every ACC team will be wearing wristbands to commemorate Frates and promote ALS awareness. The involvement of these other teams is commendable and shows the widespread effects of Frates’ efforts. His story has affected far more than just the BC community. The work he and his family have done has helped ALS research make great strides in fundraising and awareness and have demonstrated how much good can come from one man’s struggle. Money raised during the event through the selling of wristbands will go to the Pete Frates No. 3 fund, furthering the ongoing cause.

The event should receive heavy attendance and is a good way to end a less-than-stellar athletic year. After disappointing football and basketball seasons, this event provides a positive athletic experience, as baseball has continued to improve this season. This means that the event also serves another positive purpose by presenting a more successful aspect of BC athletics as the year comes to a close.

The retirement of Frates’ jersey is a worthwhile celebration of the good he has done while also raising more awareness for the cause he still fights for. This event encapsulates some of the best things Boston College athletics has to offer.