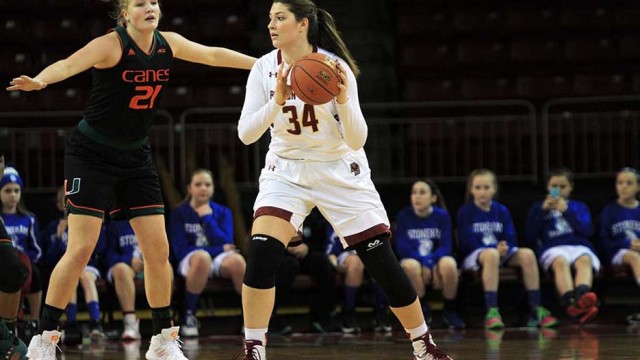 Since she was a little girl, Mariella Fasoula has been on the path to be a big man.

It started outside of her Memphis home, when a 5-year-old Fasoula stumbled outside the garage one afternoon to find her father and brother playing basketball in the driveway. Intrigued, she asked to play.

Her dad could have entertained the toddler by lifting her up for a slam dunk, or explained to her how to dribble and shoot. Instead, he asked her a question.

“Do you know what a rebound is?”

Fasoula shook her head. But lucky for her, she had the perfect teacher.

As a 7-foot center, Panagiotis Fasoulas started for the Greek national team in the the 1987 FIBA European Championship. His competition included international powerhouses such as the Soviet Union, Yugoslavia, and Italy, which qualified because of their performances in the 1985 tournament. Greece, on the other hand, qualified because it was hosting.

But after barely escaping the group stage, Panagiotis and the Greek team began clicking in the elimination rounds. The squad upset undefeated Italy in the quarterfinals before edging out Yugoslavia in the semis, setting up a title match with the heavily favored Soviet Union. In front of a home crowd of 17,000 in Athens, Greece squeaked by the USSR in an overtime thriller for its first-ever gold medal. At the heart of its Cinderella run was Panagiotis’ interior presence, blocking shots, grabbing boards, and throwing down vicious dunks in the paint.

Today, Panagiotis—who moved his family back to Greece to serve as mayor of Athens’ port city, Piraeus, in 2004—is a local legend in Athens, attracting attention when he just walks down the street. But he’s no longer the budding basketball star of Greece that everyone is talking about. Now, 4,700 miles away from the birthplace of democracy, all eyes are on his daughter, a 6-foot-4, not-so-little-now freshman tasked with reviving both Boston College women’s basketball and the Greek national team.

* * *
A rebound may never make a highlight reel or a hoop mixtape, but it could make the difference between winning and losing.

“It is the most essential thing,” Panagiotis reminds Mariella.

See, you can make a career out of size, rebounding, boxing out, and blocking shots. Panagiotis knew that firsthand. But pure scorers? They are much more volatile.

For the Fasoulas, everything begins and ends in the paint. Last year, those words came as music to head coach Erik Johnson’s ears during his search for a post player who could purge the Eagles’ identity as a jump-shooting team. Fasoula was the missing piece.

In her first year in Chestnut Hill, Fasoula won the starting job over sophomore Katie Quandt and immediately began producing for the team. At 18, she played with basketball wisdom beyond her years thanks to her experience playing with women 10 years her senior on the Greek national team.

Oh, and ball she did.

The addition of Fasoula to the starting lineup opened up an inside-out game that had been absent from the team for years. Previously, the Eagles relied too much on the perimeter, and their playmakers couldn’t do proper damage. Now, with a true center, BC guards like Martina Mosetti and Nicole Boudreau were able to get the ball into the low post, where Fasoula would either challenge her defender or kick the ball out to a 3-point specialist like Kelly Hughes in the case of a double-team.

The new game plan helped the Eagles to win five straight out of the gate, and ultimately finish 13-1 in nonconference play. One of their most notable victories came in December in the Big Ten Challenge against Purdue, when Fasoula scored a career-high 23 points on 11-of-15 shooting, adding nine rebounds and two blocks to top it off. Her effectiveness close to the hoop forced the Boilermaker defense to sag off the 3-point line, giving space for Boudreau to knock down a game-winning trey with 7.4 seconds remaining. The victory was BC’s first in the annual Big Ten Challenge game since 2010.

“We beat Purdue with a whole team effort,” Fasoula said. “I hadn’t felt so energized by the team so much until that game. It was something really special.”

But the excitement of their wins away from the ACC quickly evaporated as soon as conference play commenced. The team’s best start since 2010-11 gave way to four straight conference losses and, ultimately, a 2-14 record in the ACC.

Despite the team’s slump, Fasoula remained a defensive stalwart and a model of efficiency on offense. Against ACC teams, she led the Eagles with 15.3 points per game on 53 percent shooting, good for fourth among all players in the conference. Her 404 total points marked the highest total by a BC freshman since 2007-08, and her selection to the All-ACC Freshman team was the program’s first since Boudreau in 2012-13.

Generally considered a defensive and rebounding specialist before college, Fasoula emerged as a prolific scorer not by using her size to shoot over defenders, but by employing her signature shot to maneuver underneath them. Dubbed the “ice-cream scoop” by her teammates and coaches, the up-and-under layup was as unconventional as it was lethal. It looked like a spin move tailored for 30-year-olds playing overseas, not ACC basketball.

“It’s such a good move that, even though we call it an ice-cream scoop, you gotta respect the move,” Jones said. “She gets buckets that way. It’s so hard to stop that why would you change it?”

The ice-cream scoop was crucial to Fasoula’s development on offense, where creative post moves have helped her succeed against more athletic ACC centers and reach double-digit scoring in 23 games—13 of which she led the team in scoring. All of this came from a player who started the season on the bench.

* * *
Fasoula rarely lost back home in Greece, but when she did, she did not take it lightly.

She’s her own biggest critic, and it’s not even close. Panagiotis recalls entire car rides back from club basketball tournaments during which he and his wife spent hours trying to convince Fasoula that a loss wasn’t all her fault. Now, he applies a different approach: offering advice given to him by legendary college basketball coach Jim Valvano.

Panagiotis played under Valvano at NC State in the 1985-86 season, averaging 2.8 points and 3.2 rebounds per game. The numbers don’t jump off the page, but his height screamed potential for NBA teams. In the 1986 draft, Panagiotis was selected in the second round by the Portland Trail Blazers.

“Back in 1986 when I was drafted, Kareem, Magic, Isiah Thomas, and Dr. J were all still playing,” Panagiotis said. “I could not manage myself with legends like these people on the court.”

So he returned home to play professional basketball in Greece. As he began his fight to bring his country a gold medal for basketball, his old coach, Valvano, was starting a fight of his own. The 1983 NCAA Champion was diagnosed with bone cancer in 1992 before passing a year later. His ESPYs speech, delivered eight weeks before his death, serves as a reminder of his infectious personality and unwavering positivity.

When his daughter is upset after a loss, Panagiotis borrows from Valvano to cheer her up.

“He kept telling me that every failure is a lesson, and that you have to fail so many times to succeed,” Fasoula said. “That’s what [Valvano] would tell my dad, and he passed it on. My expectations for myself are really high. I’m really hard on myself so he keeps telling me these quotes that Jimmy Valvano would say.”

Before and after each game, Fasoula calls her father for advice and motivation.

“He always tells me to focus on details,” Fasoula said. “I think that’s the main thing that he always reminds me of: ‘Be focused on what you do and do it to the best of your abilities.’”

Most of the time, the guidance is straightforward. Rebound the basketball, move off the ball, support your teammates—the same directions she receives from her coaching staff every day. But it’s the familiarity of the voice on the other end of the phone that brings her comfort—and confidence—before she steps on the court. In just a few weeks, she’ll reunite with the man who laid the foundation for her success when she flies home to Greece to join the national team for the summer. Though the group was only recently promoted from the Division-II level, Fasoula hopes to catapult Greece to the international stage, just like her dad did.

Throughout the season, Jones learned bits and pieces of Greek from Fasoula and her family. But when the Athenian starts talking to herself during games in her native tongue, it’s all Greek to Jones.

“She’ll just go off on rants in Greek on the court,” Jones said. “Half the time, I don’t know what she’s saying. Then she’ll just go back to English, she’s like ‘Oh, my bad.’”

Fasoula insists there wasn’t a culture shock coming back to America, but, like any normal first-year college student, she has had her fair share of out-of-place moments. Luckily, she made a best friend who knew the ropes.

Jones has been right by Fasoula’s side since she arrived on campus last August, helping her adjust to American college life, the T, and showing her the shortcuts around BC’s steep campus. The friendship is an unlikely one at first glance—Jones, listed at a generous 5-foot-7, is the shortest on the team, reaching Fasoula’s shoulders on her tiptoes. Though their homes are separated by thousands of miles and their heads by another nine inches, the two are nearly inseparable.

During the last two minutes of a close game this season, Fasoula and Jones were sitting together on the bench with their eyes glued to the court. Fasoula may have been too focused, though. When the center reached for a cup of blue Powerade on the sideline, she missed her target altogether.

“All the blue Powerade spills on her white jersey and I’m just sitting there dying with laughter,” Jones said with a chuckle. “Then I’m like, ‘Oh crap, I gotta get her cleaned up.’ So I’m pouring my water bottle on her jersey, trying to wipe it out. We were all just laughing so hard.”

With a schedule as hectic and busy as Fasoula’s, it’s important to laugh at moments like these. Panagiotis hasn’t taken his daughter on a family vacation since she was a toddler because of the constant flux of basketball tournaments. Her free time is even more limited as a student-athlete at BC—not to mention an international student, as well.

But whenever she feels overwhelmed, she can always turn to her father for support. Panagiotis knows the rigors of being a student-athlete in a foreign country, and he knows his daughter better than anybody. As for comparisons between the two Greek stars?

Having a Greek basketball legend as her dad has helped Fasoula become the player she is today. But she has also created her own distinct brand of the game that is simply unteachable. From her garage basketball hoop to Athens to Conte Forum, she has transformed from Panagiotis’ daughter into Mariella Fasoula, the bonafide big man who’s leaving her mark all over America’s best college basketball conference.

erik johnson mariella fasoula athletes of the year 2016 stephanie jones
Finding Spring in the City: The Blooming of the Pom-pom Tree
2015-16 Breakout Male Athlete of the Year: Jacob Stevens