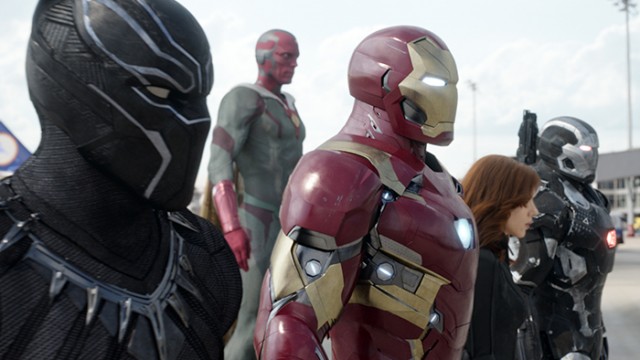 The consequences of superhero destruction are rarely ever tackled in film, for good reason. The thought of all the casualties at the hands of supersized fights is a sobering one that really can put a damper on the exuberant (fun) thrashings being given to heroes and villains alike. Captain America: Civil War is able to capitalize on this relatively untested thematic ground and still make for an ensemble performance that hits all the right notes. Bringing a whole new level of depth to characters, Marvel continues to prove its films can be more than just about ground-and-pound action, speaking about the humanity that remains in all of us.

In an attempt to save his friend Bucky Barnes, the Winter Soldier (Sebastian Stan), from a different age than theirs, Captain America (Chris Evans) chooses to stand against provisions, the Sokovia Accords, that would hinder the Avengers’ influence and effectiveness in the world. As the Avengers begin to divide on the issue, several factions form. Much to the dismay of Tony Stark (Robert Downey, Jr.), a dark spiral of events ends in the two groups squaring off, each towing a harsh line of friendship tainted by vitriolic ideological dissent.

One of the best aspects of this film is that it hits all the emotional notes with the appropriate weight. Characters are able to deliver lines passionately, explaining their motivations and convictions, and in the next instance throw out quips, poking fun at friends on the other side of a bitter struggle. This duality is especially apparent Spider-Man (Tom Holland), with his chipper, mirthful attitude, Ant-Man (Paul Rudd), acting as the new guy in town, and the charming naivete of the Vision (Paul Bettany). The result is a film that hits you with hard questions, but gives plenty of palate-cleansers, never venturing too far into the drear of a Zack Snyder superworld.

Evans and Downey, Jr. function very well as the philosophical fulcrum of the film. Each is relatable and their emotions are worn on their sleeves. This makes for a dynamic experience for viewers, as one will certainly feel the validity of the two sides pulling the audience toward each pole. Not only does each character hold fast and hard to his or her point of view, but each has visual, visceral reactions to the challenges of other heroes and momentous narrative revelations. Downey, especially due to the gravity of several key plot points, makes Iron Man much more man in this film than iron.

And because of this, the impressive level of action feels all the more pressing and meaningful. Though viewers may not relish in Hawkeye (Jeremy Renner) and Black Widow (Scarlett Johansson) exchanging blows, it feels necessary and justified. The mutually-assured destruction of these beloved characters is as visually striking as it is charged with pathos and a hint of comedy.

Much of the problems of Batman v Superman, another battle between good guys, stemmed from a lack of substantive character motivations. Civil War does not share this issue. Though simple in its premise, the film is able to show how governmental provisions of control, the Accords, may have a profound impact on the lives of our heroes. With Marvel’s track record thus far, it would seem the company’s narrative ingenuity can adapt to any storyline.

One of the less compelling aspects of the film lies in its would-be villain. Forgettable and, for the better part of the film, irrelevant, the villain seems an afterthought. Though his motivations line up seamlessly with the themes of the film, his screen time could have been better spent on other characters. His ineffectiveness is felt strongly, as much of the story still progresses though the ambitions of those donning capes and masks, without his influence. In a film that will certainly garner the label of “overstuffed,” the villain’s inclusion simply adds to its over-encumbered nature.

The number of characters in the film makes for some cluttered moments, but the story really remains about Cap and Stark. Though Marvel has not made a flawless film, it has not made an ostensibly bad one, either. In Civil War, it may have found its best.

Surprisingly philosophical, Civil War speaks about a kind of moralistic relativism that is apparent in our world. Who is right? Who is wrong? Can any one person’s motivations be more valid than another? Civil War asks this question and shows what may lie on the logical extremes when we attempt to answer. This dichotomy allows the film to remain ambiguous in its conclusion. The symbolic nature of the Avengers, super people in super situations, is used to suggest that such moral conundrums do not belong solely to those endowed with super abilities. Choice is a power all people have.

captain america: civil war
‘Views’ From the Top are Cloudly as Drake Deviates Too Sparingly
Tom Coburn Semifinalist for Ernst and Young Entrepreneur of the Year Award