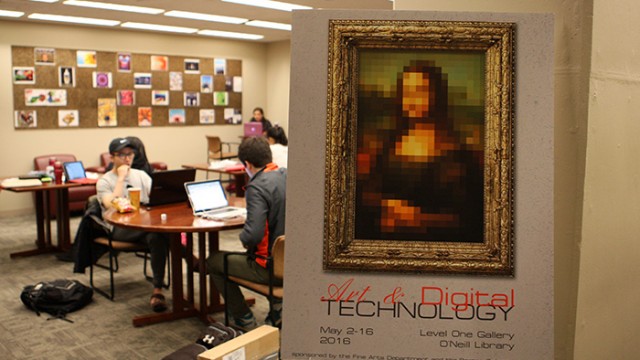 ‘Art & Digital Technology’ Exhibit Meditates on the Unconventional and Metaphysical

A pixelated Mona Lisa portrait prefaces a gallery full of silently studying students. The picture, both in itself and its context, encapsulates O’Neill’s Art & Digital Technology exhibit, a modern interpretation of a cultural icon, allowing for new artistic insight on old objects, rather well.

The exhibit runs from May 2 to 16 in the Level One Gallery in O’Neill Library. Taken from the final projects of students in Professor Karl Baden’s studio art course, each of the pieces mimics mass-produced art like magazine spreads, advertisements, and music covers made in Adobe Photoshop and Illustrator.

O’Neill’s Level One Gallery, with its spare cork boards, blank walls, and quiet students, offers structure to contrast the diversity among the pieces that checkerboard its display space. While all of the panels are around the same size, they are visibly varied in a rainbow of colorful subjects.

The exhibit, which engages a variety of pop culture media and subjects, has a large number of mash-ups, juxtaposing two pieces of art to put both in new perspective. One piece mimics the poster for Forrest Gump but includes the silhouette of Disney’s Little Mermaid in place of Tom Hanks. Another movie poster, for About a Boy, has been changed to About a Toy, with Toy Story characters surrounding Hugh Grant.

Not only movies have gotten this treatment. The cover of The Giving Tree was modified in one case to include Snow White catching the proffered apple from the tree. On another wall of the exhibit, Kanye West poses in a classic Rosie the Riveter poster, with the speech bubble refurbished to say, “STRONGER.”

Even more familiarly, some students decided to incorporate Boston College views, like King Kong swatting at planes atop Gasson tower. Another shows the same view of Gasson with an impending starship in the sky. Yet another shows views of campus between sections of a crossword puzzle with campus language.

The effect of combining such disparate pieces of culture seems humorous. The permutations seem unlikely, crossing the boundaries of time and genre. But their tensions allow for new definition of both objects involved. For instance, Ariel’s silhouetted posture recalls Hanks as he sits on the bench, a concrete spatial analogy. Gasson, a central and highly visible point on campus, looms like the Empire State Building.

Other pieces deal with subjects individually like more common, commercial design projects. Several even have common themes. Two Beyonce posters treat their subjects entirely differently. One plays with outlines and cut-out pictures in darker hues, while the other replicates the singer’s picture against yellow and red stripes with the tagline, “Let’s Get In Formation.”

The Beyonce posters have the unusual quality of depicting their human subject as an object by tessellating the singer’s image across pages. When displayed next to the other posters, it seems easier to think of Beyonce in terms of brand because of the lack of concentration on form and other human qualities.

The Absolut Vodka brand has several different treatments as well that lend it multiple connotations. One panel shows an Absolut-bottle-shaped skyscraper nestled in the New York skyline. In another, the Powerpuff Girls and other cartoon characters gather around a bottle’s base. Yet another features a tropical scene like a magazine cover, emblazoned with the phrase “Absolut Adventure.”

So are viewers to understand Absolut Vodka as either cosmopolitan, playful, or adventurous, depending on the depiction? Is it an average of the three, despite the tensions between these adjectives? How can these descriptions be simultaneously appealing?

These pieces have the superficial appearance of advertisements, posters, and other mass media. But taken collectively, they consistently depict objects unconventionally. On one level, they each seem like meditations on their individual subjects, but they may in fact be meditations on new media itself.

Digital art allows for the construction of spaces that uniquely showcase the relationships between form, content, and style. The ability to appropriate and replicate images from other art exactly is the very aspect of digital art that lets these meta relationships happen, either through object comparison or object recontextualization.

The lines of text included in many of the panels further complicate each image set. While some have actual titles or excerpts of relevant quotes, some of the false magazine spreads and comic book pages instead have “lorem ipsum” filler or plain gibberish, refusing to yield overt explanation.

Art & Digital Technology shows us, as it claims in its title, how we understand art and new media. But it also challenges our understandings of objects and urges us to internalize multiple interpretations. As students flock to the libraries during finals, these masterful and imaginative digital studies certainly merit viewing during a study break.

art & digital technology
In the Summertime, When the Weather is Fine
Finding Different Pieces of Myself