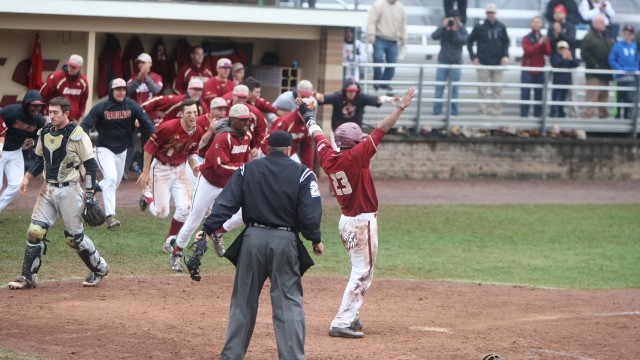 Birdball Walks Off Past Wake Forest in ALS Awareness Game

Followed by an entourage of family, friends, and news cameras, Frates arrived at Shea Field just in time to see Gabriel Hernandez smack a double, advance to third on a passed ball, and score on a throwing error to give the Eagles (26-18, 10-14 Atlantic Coast) a wild 9-8 walk-off win over Wake Forest (28-18, 11-12). The victory—which came minutes before Birdball retired Frates’ No. 3 jersey on the right field fence—was as important for postseason aspirations as it was meaningful for players and coaches who have stood by Frates since his ALS diagnosis in 2012, watching as his Ice Bucket Challenge (and other initiatives) raised awareness and $200 million toward research.

Another walk-off win from an error?! @BCBirdBall with a huge 9-8 victory over Wake with @PeteFrates3 in attendance! pic.twitter.com/WFC51yttiY

Between the chalk, BC’s offense got going early on Saturday, scoring five runs off of Drew Loepprich and chasing the Demon Deacon starter after only two innings. From there, it almost looked as if Eagles would coast to an easy win on the wings of flamethrowing righty Justin Dunn.

You didn’t need to bring a radar gun to know that the projected second-round pick was throwing cheddar, but about a dozen scouts did so anyway. Dunn didn’t allow a hit until the fourth inning, and only seemed to improve as the game continued. On his 99th and final pitch of the game, he blew a 96-mph fastball right by No. 3 hitter Stuart Fairchild to escape a 2nd-and-3rd jam in the seventh inning.

“They were getting a little chirpy in their dugout and I was starting to get a little fed up with it,” Dunn said. “So I put a little bit extra behind that one.”

The closer-turned-starter lasted seven innings, a career high, allowing only five hits and one run while striking out four. Perhaps most impressive of all, he made Wake slugger Will Craig look a little less scary in the batter’s box, holding one of the nation’s best players hitless in his first three at bats.

But when Dunn’s day was over and it was time for Birdball’s bullpen to maintain a healthy 7-1 advantage, the skies opened up above Pellagrini Diamond. Naturally, the Demon Deacons pounced all over the opportunity to mount a comeback.

Reliever John Nicklas gave up a double to Craig and retired the next two batters before the wheels officially came off. Pitching in cold, soaking wet conditions, Nicklas walked his next hitter and struggled to find the strike zone with two outs. Wake shortstop Johnny Aiello then poked his only hit of the day into left field, scoring Craig and putting two runners in scoring position. Head coach Mike Gambino watched as his reliable middle reliever lost all control in the rain, walking the next two batters and allowing a home run. With a 7-3 lead, Gambino opted for Bobby Skogsbergh to relieve Nicklas against the stud second baseman Nate Mondou with the bases load and two outs.

Mondou hammered his third home run of the season over the right field fence and into the football practice field to bring the Demon Deacons back from the dead, a deflating gut-punch to the 933 fans at the Birdcage who braved the weather to see Frates’ jersey retired. The pouring rain wasn’t the best mood-setter, either.

But things looked a little brighter for BC in the bottom of the eighth, when Michael Strem blasted a line drive that kept going all the way to the wall in center, scoring Jake Palomaki from first to reclaim the lead, 8-7. Strem ended up at third on the play, but would later be stranded there to end the inning.

The top of the ninth inning was a rollercoaster for catcher Nick Sciortino. With nobody out and runners on first and second, Sciortino attempted an ill-timed back pick at second base that bounced at Johnny Adams’ feet and ended up in center field. Freedman, a pinch-runner for Craig, advanced to third and would later score the game-tying run off of a Kevin Conway RBI single to right field.

Still without an out, and with runners at the corners, Birdball’s chances looked slimmer than ever. Ben Breazeale hit a groundball to the right side that looked like a sure-thing to score Wake’s Gavin Sheets from third, but Jake Palomaki made a diving stop and lept to his feet. Even then, it appeared as if Sheets would still beat the throw home and give the Demon Deacons their first lead of the ballgame.

But Sciortino was thinking one step ahead. A member of the Johnny Bench Award watch list, Sciortino tricked Sheets into thinking Mak was instead throwing to first or second by standing up straight and putting his arms by his side in a very non-ready position. The subtle shift in demeanor caused Sheets to slow up on his way home ever so slightly, and when the throw arrived and Sciortino suddenly jumped back into full-on catcher mode, he tagged Sheets out for the first out of the inning. The next hitter, Aiello, killed the rally by lining one straight toward Mitch Bigras at first, who caught the ball and stepped on first for an unassisted, inning-ending double play.

Jesse Adams picked up another win out of the bullpen, tossing a scoreless 10th inning. The victory clinches a winning record for the Eagles, their first in the Gambino era. Unfortunately, as proud as Birdball should be after another exciting walk-off win, Frates’ jersey retirement, and the first winning record under Gambino, a harsh reality remains: BC will most likely need to win 2-of-3 from No. 22 Georgia Tech next weekend in order to have a shot at the ACC Tournament.

It’s an uphill battle, but Gambino & Co. have proved over the years that it’s their favorite kind of fight.