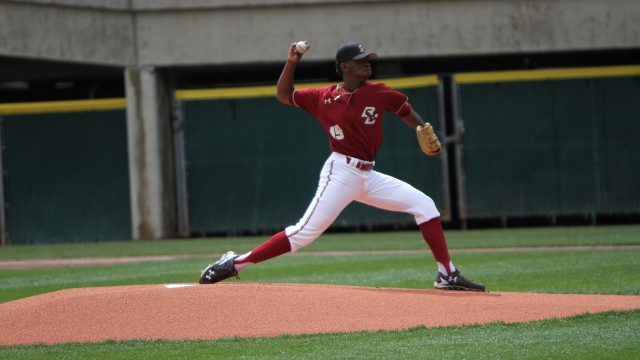 The recognition for Boston College baseball continues to roll in. Amid its unpredicted NCAA Tournament run, the team’s newfound ace, Justin Dunn, has been selected by the New York Mets as the 19th pick of the 2016 Major League Baseball Draft, tied with Chris Lambert’s No. 19 selection in 2004 as the highest-ever for a pitcher from BC.

Dunn exploded onto the scene as a top-notch NCAA pitcher earlier this year, when the then-closer, who hurls mid- to high-90s, started taking the mound at the beginning of games instead of near the end. While head coach Mike Gambino had two starters that he could trust over the weekend against ACC competition—Mike King, a proven veteran with sharp control, and Jacob Stevens, a freshman who allowed just two earned runs in his first 40 innings of collegiate work—the third man, Jesse Adams, consistently struggled in his first three conference starts, especially the second time through the order. So, Gambino made the swap.

This wasn’t Dunn’s first go of it on the mound. His final four appearances his freshman year were starts against non-conference teams, though they grew progressively worse. The coaching staff tried him as a starter again his sophomore year, this time around the beginning of ACC play. The results: 8 1/3 total innings, 10 total runs, six walks (all in one game), and two BC losses. Dunn went back to the ’pen, where he slowly chipped away at a 6.75 ERA, just getting it down below 4.00 before a rough three-game stretch to end the season.

This year made it Dunn’s third time around. And it was a charm.

After a five-inning shutout performance in his debut against No. 16 Virginia, Dunn earned himself a regular role in the rotation, slowly building up his endurance with each start. Part of this has involved learning how much to hold back. Just because he can throw up to 98 mph doesn’t mean he always should. With this fine-tuning, helped along by pitching coach Jim Foster and catcher Nick Sciortino, he peaked with a complete game against Georgia Tech in the final series of the year, allowing just two runs and picking up a crucial win for BC—something he has become very good at during the seven starts that have propelled him to the top of draft boards.

Of those seven games, including the NCAA Regional game last Friday, Dunn has gotten just three W’s, but BC has ended up with seven wins. To be clear, that says nothing bad about Dunn, who has allowed just seven earned runs in those seven starts and never more than two in a game, but more about the strength of the pitchers he’s facing—and, in the end, outperforming.

He flew by other leading starters to take the top spot in the ACC for ERA (1.52), and climbed draft boards even faster. The small high schooler who was taken in the 37th round by the Los Angeles Dodgers in 2013 to No. 11 overall on Keith Law’s final lineup. Like BC baseball, he has grown up and started to make a name for himself this year.

The team is currently holding a watch party for the draft, like it did for the NCAA Tournament selection show last Monday. The guys will undoubtedly be rooting for their leader—now both on the mound and during their pre-game hype-up rituals—to go early, even if it means he won’t be back at Shea Field next spring.

After all, this season isn’t over yet. Dunn’s starting for BC tomorrow in the Super Regional against Miami (FL). And they’re hoping he’ll get a couple more after that.