Home » Behind King and Bigras, Birdball Battles Back to Take Game Two of Super Regional 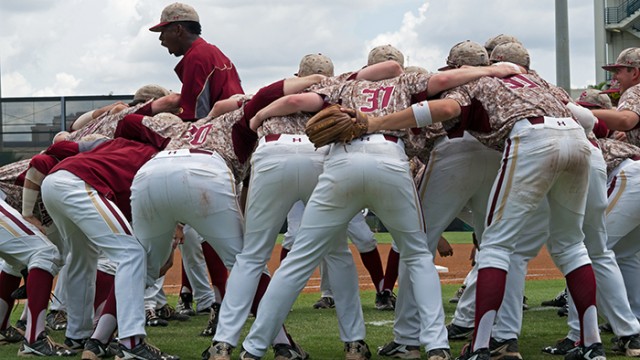 Behind King and Bigras, Birdball Battles Back to Take Game Two of Super Regional

CORAL GABLES, Fla. — Mike Gambino never passes up an opportunity to have some fun with his players.

Even in victory, Gambino doesn’t let his squad, Boston College baseball, get away with mental mistakes or lack of execution. If there’s something that needs to be called out, Gambino will do it after the game. Today’s victim? Mike King.

In perhaps the gutsiest start of his career, King allowed nine hits, a career-high four walks, and three runs on 99 pitches in six innings against a tough University of Miami lineup. The junior from Warwick, R.I. mixed up his tough, two-seam sinker with a solid, sharp curveball. He credited catcher Nick Sciortino, one of the game’s best defensive backstops, with stealing strikes thanks to some some excellent pitch framing, not to mention his own ability to get ahead of the count.

“He made a mistake with Zack Collins, and he does what he does with mistakes: he put it off the garage,” Gambino said. He was referring to a meatball King left over the heart of the plate that Collins, Miami’s power-hitting catcher, blasted for a long home run. Immediately, the court broke out in laughter. Joe Cronin and Donovan Casey giggled at Gambino’s attempt at a joke, while King just sat there with a grin.

Despite that one mistake, King’s gritty start, combined with some clutch hitting by Mitch Bigras, gave No. 20 BC (35-21) a 5-3 victory over No. 3 Miami (49-12). With the victory, the Eagles and Hurricanes will play a winner-take-all game Sunday afternoon at 12 p.m. in their best-of-three Super Regional series. The reward: a spot in the College World Series in Omaha, Neb.

King traded zeroes with Miami starter Danny Garcia through the first three innings. His run was highlighted by a stretch in which King struck out five Miami batters. After the game, King claimed to have been motivated after learning he was selected in the 12th round of the Major League Baseball Draft by none other than the Miami Marlins.

“I found out in the clubhouse,” King said. “It definitely put a smile on my face to get drafted. … I struck out only three [of those five] in a row after I found out, but hey, who’s counting?”

But the Hurricanes struck first on the aforementioned bomb from Collins in the fourth. Singles by Brandon Lopez and Willie Abreu brought up Jacob Heyward, who blooped it over Jake Palomaki’s head at second base. Quickly, Miami had a 2-0 lead and threatened with the bases loaded and only one out. With a visit by pitching coach Jim Foster to calm him down, King got out of it with a strikeout by Edgar Michelangeli and a flyout by Carl Chester.

A perfect spot for the Eagles. In fact, it’s the only spot the Eagles want to be in.

Casey started the rally with a no-doubter home run to deep left field on a 1-2 pitch from Garcia, his first of the season. Cronin followed quickly with a double down the left-field line. After a sacrifice by Johnny Adams, Scott Braren lined a ball at Johnny Ruiz. The normally surehanded second baseman—one of many on a Miami squad that boasts the third-best fielding percentage in the nation—booted it, allowing Cronin to score and tie the game.

Then came BC’s very own Mr. Clutch—none other than Bigras, the No. 9 hitter.

With two on after a Logan Hoggarth single and only one out, the slender left-handed hitting first baseman from Sarnia, Ontario lined a pitch into right-center field. Once again, Miami’s biggest strength turned into a huge weakness. Abreu misplayed it and fell down—after the game, he called it “unacceptable” that he couldn’t come up with the ball—and it rolled to the wall. Braren and Hoggarth scored standing up, while Bigras slid into third base. The kings of small ball responded in a huge way yet again.

“I thought Mitch did a great job, and it kind of speaks to our lineup,” Cronin said. “We’re one through nine, and it’s going to be a different guy every day.”

King nearly coughed up the lead in the top of the fifth but was bailed out by a quirky play. With Collins on first, Lopez lined a ball off the third-base bag and into left field. But King’s quick hustle to third allowed Hoggarth to nail Collins on a bang-bang play, leading to some screams by Miami head coach Jim Morris. Had Collins been called safe, he would have scored on Ruiz’s ensuing tripled down the right-field line, one that cut BC’s lead to 4-3.

The Hurricanes’ typical Mark Light Magic, however, worked against them. A deep fly ball by Abreu was knocked down by the wind, preserving the lead.

Solid two innings of bullpen work by Jesse Adams, the newest draftee of the Cincinnati Reds, helped BC get to the eighth with the lead. That gave Bigras another chance to shine.

A Hoggarth single and stolen base by pinch runner Dominic Hardaway gave him another runner in scoring position. And, once again, Ruiz failed to make a play on a ball hit at him. The insurance run was even more key for the Eagles, as a two-hour rain delay forced Adams out of the game for the final three outs.

Gambino, however, wasn’t worried. His other closer, Bobby Skogsbergh, was ready for the task. Despite allowing a single, Skogsbergh breezed through the ninth, capping it off with a strikeout of—who else?—Zack Collins. After the game, Gambino actually was thankful that the rains came—if it hadn’t, Adams would have come out for the ninth inning. Because Skogsbergh got in an inning of work, Adams will likely be available tomorrow, giving BC its two best relievers. And, despite being huge underdogs in the series, Gambino feels confident in his team’s chances tomorrow.

“Whenever our boys walk on the field, they expect to win every day,” Gambino said.

Yet even after talking about all the good stuff, Gambino still had to remind King about the home run to Collins. When the head coach brought it up again, King looked back with a smile.

“Sorry buddy,” Gambino said. “No please, continue,” King shot back, causing another round of laughs.

Still, it’s that kind of loose mentality, a lighthearted brotherhood, that has led BC through its magical run. And it has brought the Eagles one win away from the biggest prize of them all: a trip to Omaha. 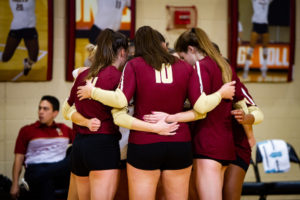