Two of Boston College football’s all-time greats will earn the highest honors a program can bestow upon a player.

On Tuesday afternoon, Director of Athletics Brad Bates announced that BC football will retire the jerseys of All-Americans Matt Ryan and Luke Kuechly. The players, who have each achieved tremendous success both at BC and in their professional careers, will receive an in-game ceremony in the 2016 season. Kuechly’ will be honored during the Oct. 22 game against Syracuse, while Ryan will receive the same honor during the Nov. 19 game against Connecticut.

“On behalf of Boston College and Eagles fans everywhere, I would like to congratulate Luke and Matt on this well-deserved honor,” Bates said in a statement. “Matt and Luke represent the very best of intercollegiate athletics and personify the Jesuit principle of ‘men and women for others.’ … They make all of us very proud.”

Nicknamed ‘Matty Ice,’ Ryan was selected third overall by the Atlanta Falcons in the 2008 NFL Draft, the highest-ever draft pick of a BC athlete. Ryan was the starting quarterback of the Eagles for two full seasons in 2006 and 2007 under head coaches Tom O’Brien and Jeff Jagodzinski. In those two years, the Eagles amassed a 21-6 record that included bowl wins over Navy (25-24, Meineke Car Care) and Michigan State (24-21, Champs Sports), as well as an appearance in the ACC Championship Game in 2007. That 2007 season was the best since Flutie’s 10-2 Heisman Trophy campaign in 1984: the Eagles peaked at No. 2 overall and won the ACC Atlantic Division, their only football title of note since moving to the conference in 2005.

Ryan has also earned many personal accolades, including the 2007 Johnny Unitas Award, the Manning Award, and ACC Player of the Year. He is BC’s single-season passing yards leader with 4,507 in 2007. In his eight-season NFL career, Ryan has amassed a 74-52 record (1-4 playoffs) without missing a start for the Falcons, with 32,757 passing yards and 202 touchdowns against 107 interceptions. He is a three-time Pro Bowler, first-team All-Pro in 2010, and the 2008 NFL Offensive Rookie of the Year.

“Boston College is an amazing place,” Ryan said in an official statement. “I am very fortunate to have had so many great memories during my college years at BC. I continue to be so fortunate with the retirement of my jersey and I am humbled that it will hang in Alumni Stadium with BC legends Doug Flutie, Mike Ruth and now Luke Kuechly. I’m so thankful for the guidance of all my coaches and the support of all my teammates during my time on campus. Football is the ultimate team sport and without their contributions none of this would have been possible.”

Kuechly, the most decorated and accomplished defensive player to play his home games in Chestnut Hill, won a plethora of awards for his outstanding 2011 campaign in which he had a nation’s best 191 tackles (102 solo, 12 for a loss) and three interceptions as middle linebacker for the Eagles. The three-time first-team All-American and All-ACC came away with the Collegiate Dick Butkus Award, Lott IMPACT Trophy, Bronko Nagurski Award, Jack Lambert Award, and Rotary Lombardi Award. He left BC after his junior season with a school-record 532 tackles.

The linebacker from Cincinnati was drafted No. 9 overall by the defending NFC Champion Carolina Panthers in 2012. He won AP Defensive Rookie of the Year that season, before following it up in 2013 with the AP Defensive Player of the Year Award. Kuechly is a two-time Pro Butkus Award winner, three-time Pro Bowler, and three-time first-team All-Pro Team member.

“It’s a tremendous honor to have my jersey retired,” Kuechly said. “It is very important to me because of the love I have for Boston College and the memories I created not only on the field but throughout all of campus. It’s an honor to have my name in Alumni Stadium along with Doug Flutie, Mike Ruth and the other great players who have been recognized. I truly enjoyed my time at Boston College and would definitely choose BC if I had to do it again.” 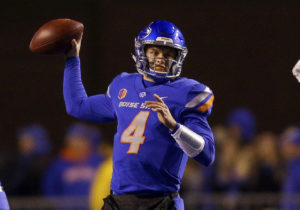