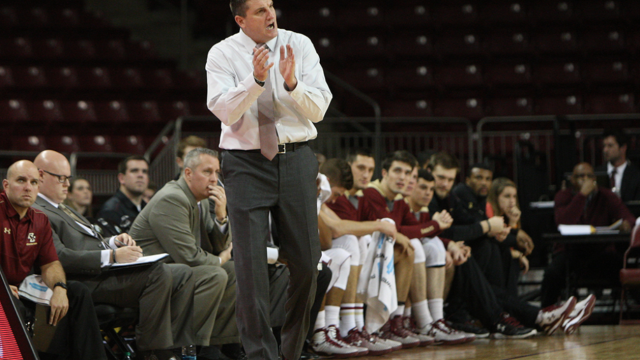 Sometimes losing can pay off.

On Monday, Boston College men’s basketball head coach Jim Christian received a one-year extension on a five-year contract that will now run through 2019-20, per Jon Rothstein of CBS Sports. BC Athletics confirmed the extension Monday evening.

Christian receives the additional year following a rough start to his career on the Heights. In his first two seasons, Christian was 20-44 (4-32 ACC) for a .303 winning percentage. This includes an 0-18 ACC campaign in 2015-16 that helped BC become the first ACC school to go winless in the conference in both football and men’s basketball. Those two seasons, however, were largely contested with players recruited by previous head coach Steve Donahue. In 2014-15, for example, Christian didn’t have a single player he brought to BC see time on the court, thanks to a preseason injury to Idy Diallo.

The extension shows a sign of confidence in the team Christian is building, despite the Eagles’ struggles last season and an offseason that saw the departure of Diallo, Matt Milon, and Sammy Barnes-Thompkins. Young players like Jerome Robinson and A.J. Turner, however, showed flashes of brilliance in 2015-16. Additionally, Christian has exciting guards coming in, such as Kyran Bowman and Ty Graves. He has also signed three transfers: forwards Maurice Jeffers (Delaware) and Connar Tava (Western Michigan), and guard Jordan Chatman (Brigham Young). Jeffers and Tava both have only one year of eligibility, while Chatman will have three because of a religious mission that kept him away from the court for two years.

In his career, Christian has amassed a 262-198 record. He had immense success at Kent State with a 137-59 record in six seasons. At Kent State, Christian won four Mid-American Conference regular-season titles and two conference tournament titles. He also reached two NCAA Tournaments, both first-round losses. That led to a stint with Texas Christian (then in the Mountain West Conference), one that was a poor 56-73 in four years. He rebounded with a 49-22 campaign at Ohio, which included one MAC regular-season title.